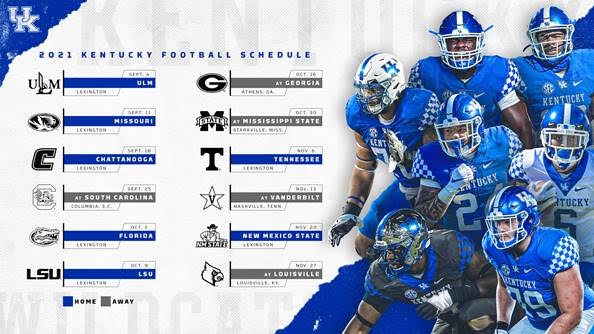 Kentucky faces another stiff slate of games, including three-week October stretch vs. Florida, LSU and Georgia

Seven home games at Kroger Field highlight Kentucky’s 2021 football schedule, including back-to-back weeks against heavyweights Florida and LSU to open the month of October, it was announced Wednesday.

The Wildcats kick off the season on Sept. 4 against the ULM Warhawks, the first of three consecutive home games to open the challenging slate. Missouri arrives in Lexington on Sept. 11 for the first conference game of the year before Chattanooga wraps up the homestand on Sept. 18.

On Sept. 25 the Cats hit the road for the first time, beginning a stretch of seven consecutive SEC affairs by traveling to South Carolina to face the Gamecocks and new head coach Shane Beamer. A week later, UK coach Mark Stoops and his squad return home, playing host to Florida (Oct. 2) and LSU (Oct. 9) before concluding the three-week gauntlet with a trip to Georgia on Oct. 16.

After a bye week on Oct. 23, the Cats head south to face Mississippi State in Starkville on Halloween weekend and Vanderbilt on Nov. 13, with border rival Tennessee sandwiched between those road games on Nov. 6 at Kroger Field.

UK closes out the regular season with a pair of non-conference games, welcoming New Mexico State to Kroger Field, the teams’ second all-time meeting in Lexington, before traveling to Louisville on Nov. 27. The Wildcats will be looking for their third straight win over the Cardinals.

Season ticket renewals will begin next month, and all returning season ticket holders from the 2019 and 2020 seasons will receive more information by email when the renewal campaign begins. Fans interested in new season tickets can place a deposit for just $50 per seat by submitting an interest form or by contacting the UK Ticket Office at (800) 928-2287 (option 1). Fans placing a deposit will have access to the best seat locations prior to general sales beginning, and will be entered to win exclusive prizes, including basketball tickets for an upcoming home game.

The support of every member of the Big Blue Nation is meaningful and makes a difference for the 500-plus student-athletes who compete for Kentucky.  Season tickets, annual donations and philanthropic gifts directly support scholarships and student-athlete support services, including academics, healthcare, nutrition, sports medicine, travel and equipment, for all 22 varsity teams. To learn more about the new Ev’ry Wildcat Fund and other opportunities to make a difference, fans are encouraged to reach out to the K Fund Office at (859) 257-6300 or by sending an email to [email protected].

The Cats are coming off a 5-6 season that saw them face a 10-game all-SEC regular season before defeating NC State in the TaxSlayer Gator Bowl, the program’s third consecutive postseason victory. Stoops’ team returns a wealth of talent in 2021, including All-American offensive tackle Darian Kinnard, and will feature a change in offensive philosophy under the direction of new offensive coordinator Liam Coen.