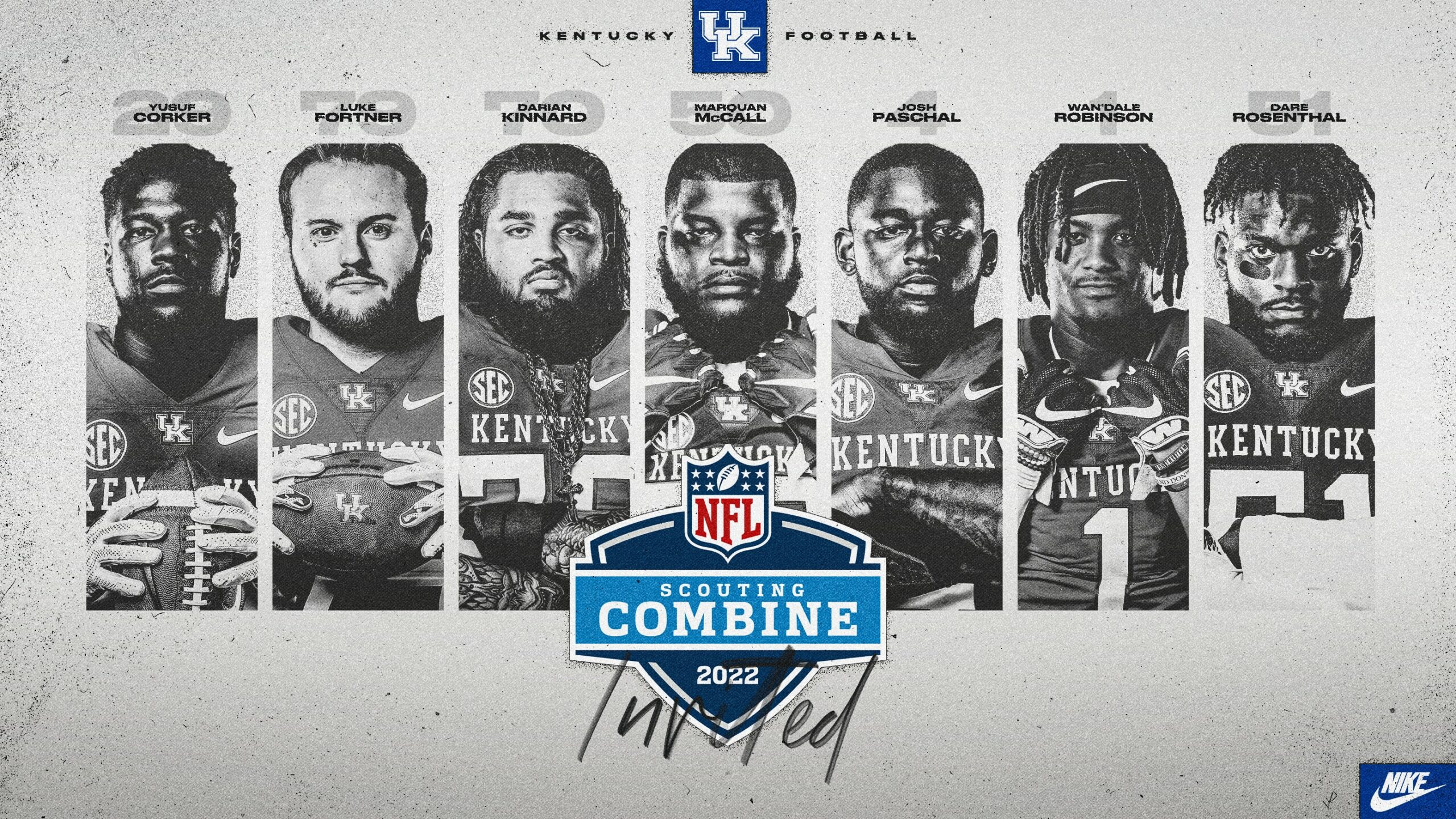 Invites are tied for the second-most in school history

Seven Wildcats received invitations for the 2022 NFL Scouting Combine, the NFL announced Wednesday. The NFL Combine is scheduled for March 1-7. The event returns to Lucas Oil Stadium in Indianapolis after a one-year hiatus due to Covid-19.

Kentucky’s seven representatives tie for the second-most in school history. UK also had seven invites in 2021, following the 2020 season. A school-record eight Wildcats were invited in 2019, following the 2018 season. Kentucky ranks 11th nationally for most players invited, and among SEC schools, UK ranks sixth behind Georgia (14) and Alabama (11), LSU and Texas A&M (9), Ole Miss (8).

Corker’s leadership, demeanor and blue-collar work ethic as a two-time team captain were invaluable to the Wildcats’ success on the field. With Corker’s help, Kentucky won a school-record four straight bowl games, including the 2022 Vrbo Citrus Bowl over Iowa.

The Lott IMPACT Trophy semifinalist finished the 2021 season ranking third on the team in total tackles with 81, including 3.5 tackles for loss. He added sack, an interception, a quarterback hurry and a team-high eight pass breakups.

Off the field, Corker graduated in May 2021 with a degree in economics.

Fortner, a 6-foot-6, 297-pound “super senior” from Sylvania, Ohio, was a two-time Campbell Trophy semifinalist who played in 54 career games for Kentucky. After switching from right guard to center prior to the season, Fortner found his niche, excelling in his new role on the “Big Blue Wall.” He graded at 84.5 percent for the 2021 season, including 19 knockdown blocks.

During his six seasons with the Wildcats, UK posted a 45-29 record and advanced to a school-record six straight bowl games, highlighted by winning the last four in a row, another school record.

Kinnard, a 6-foot-5, 338-pound mountain from Knoxville, Tennessee, played in 46 career games with 39 consecutive starts. He was an essential component for the “Big Blue Wall” which has been recognized for the Joe Moore Award, given to the nation’s top offensive line, four straight seasons, including finalists in 2021.

As a senior, he was named a consensus first-team All-American, earning first-team honors from Football Writers Association of America, Walter Camp and the Associated Press. He was a second-team All-American by The Sporting News. Kinnard was awarded the SEC’s Jacobs Blocking Trophy, just the second Kentucky player to win the award, which annually has been given to the SEC’s top blocker since 1935. He also was a semifinalist for both the 2021 Rotary Lombardi Award, given to an offensive or defensive lineman who combines outstanding performance on the field with the character and discipline of NFL Hall of Fame coach Vince Lombardi, and the Outland Trophy, given to the nation’s most outstanding interior lineman.

Paschal, a defensive end from Prince George’s County, Maryland, is the only three-time team captain in school history and is revered by his teammates for his leadership. Since learning he had cancer in the summer of 2018, Paschal has made a significant impact on the Kentucky Football program and thousands of others.

His 37.0 tackles for loss in his career, ranks tied for third in UK history.

In 2021, he led the team and ranked second in the SEC with 15.5 tackles for loss. He also had 53 tackles, 5.5 sacks, a team-high eight quarterback hurries, a forced fumble and a blocked field goal that a teammate returned for a touchdown. He is currently one of three finalists for the Jason Witten Man of the Year Award, which will be announced Feb. 17 in Frisco, Texas.

Off the field, He graduated in May of 2021 with a degree in family science and a minor in health promotion.

Robinson, a 5-foot-10, 183-pounder from Frankfort, Kentucky, was one of the most electric players to ever come through the Kentucky football program. The transfer from Nebraska caught a team-high 104 passes and had 1,334 receiving yards, setting new UK single-season records. Although he has played only one season at UK, he ranks 17th in school history in receiving yardage.

He became the sixth player in SEC history to catch at least 100 passes in a season, including Mississippi State’s Makai Polk this season. Robinson had six 100-yard games which ranks second on UK’s single-season list. He joins Randall Cobb as the only two receivers in school history to have 12 or more receptions in multiple games during their career.

Robinson was an All-SEC First Team selection by PFF and a second-team All-SEC choice by the league’s coaches. He earned the Most Valuable Player award in UK’s Citrus Bowl win.

Rosenthal, a 6-7, 327-pound left tackle from Ferriday, Louisiana, quickly found his place on the “Big Blue Wall” after transferring from LSU. He started in all 12 games and helped the Wildcats chart 10 wins for the second time in the last four seasons. He was named third-team All-SEC by PFF.

The Wildcats are looking to have multiple players drafted for the fourth straight year. In 2021, Kentucky had six players (Jamin Davis, Quinton Bohanna, Brandin Echols, Landon Young and Phil Hoskins) selected which tied for the fourth-most in school history and the most since 1979 (eight). In 2020, Lynn Bowden Jr. and Logan Stenberg were drafted and in 2019, UK had five NFL draft picks in Josh Allen, Lonnie Johnson Jr., Mike Edwards, Benny Snell Jr. and George Asafo-Adjei.

The NFL Draft is scheduled to begin Thursday, April 28 in Las Vegas.