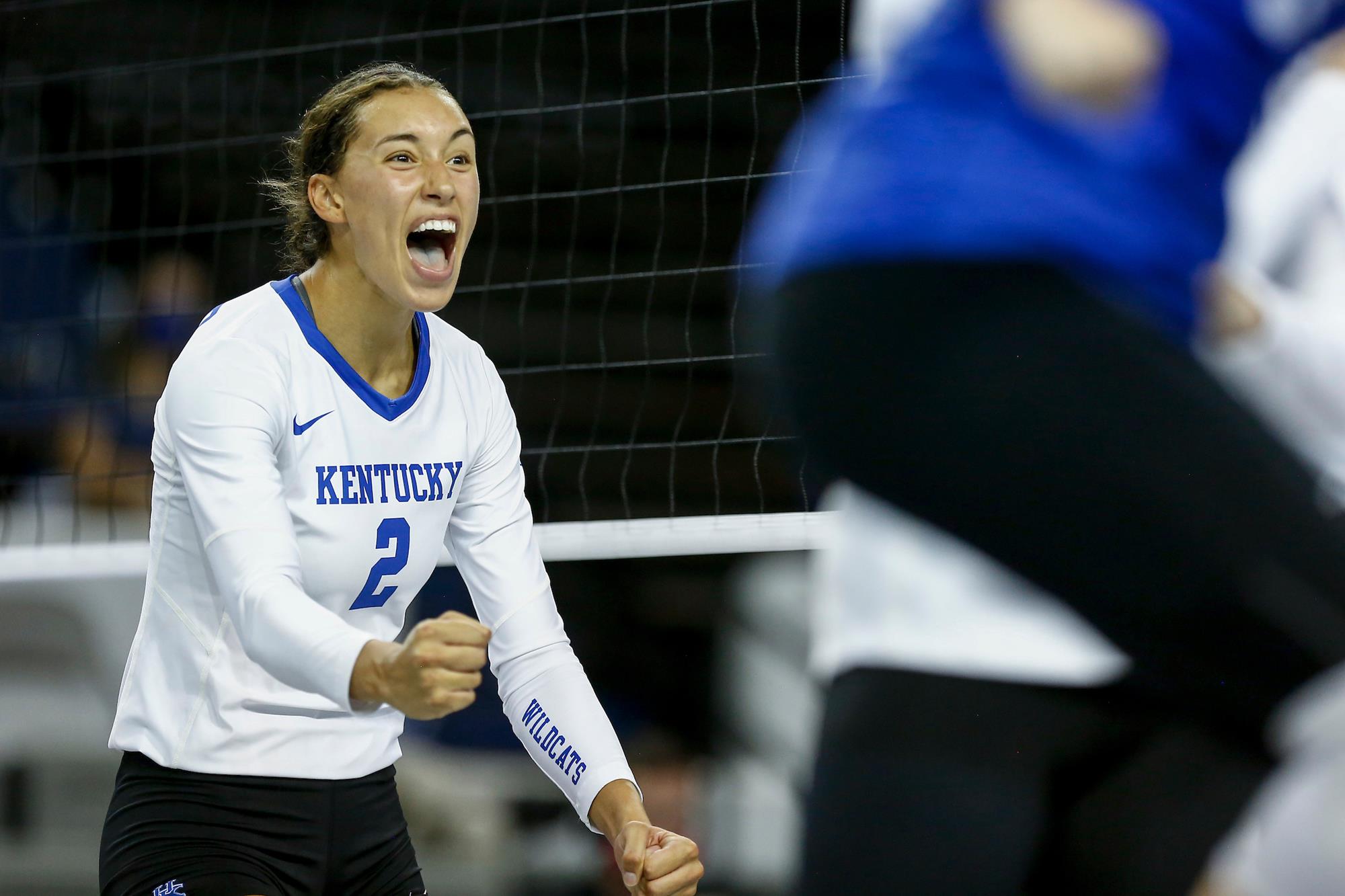 Skinner hit .615 with 17 kills in sweep of Tigers in Auburn

Kentucky hit .506 in the match, marking the first time all season that UK has hit .500 or above in a single match and the first time since 2019 when UK swept Alabama in Tuscaloosa.

Skinner had 17 kills on just 26 swings Sunday with only one error, four digs and four blocks to show for in the match. Her 17 kills led all players in the match. Her .615 hitting percentage in Sunday’s matinee in a new SEC-season high number, besting her .419 percentage set earlier this season.

With the two wins this weekend, Kentucky improves to 22-4 overall on the season and 15-1 in Southeastern Conference play with two matches remaining in the regular season. UK will host Florida (14-2 SEC) for a two-match series that will decide the 2021 SEC Championship on Friday and Saturday afternoon at 1 p.m. ET. Tickets are available at UKathletics.com for both matches. Mississippi State is also in the equation, sitting at 14-2 on the year and three matches more to play, but UK has the head-to-head over MSU thanks to its 3-1 win back in October.

Kentucky’s defense has held its opponents to a .000 or below hitting percentage in six of the last nine sets it has played dating back to Nov. 13.

The first set was the tightest of the four played to that point in the series, with Auburn closing the gap to 11-10 midway through the opening frame Sunday. After the Tigers pulled to within one, Kentucky went on a 4-1 run to lead 15-11 at the media timeout of the first set paced by three early kills from junior middle blocker, Azhani Tealer. Auburn won three successive points out of the media stoppage to pull to within one point again, at 15-14 and a service error by UK continued a sloppy start to the match with UK leading, 16-15. It was back and forth for the middle stanza of the set with neither team garnering a three-point lead until a Madi Skinner kill from the left pin made it 21-18 UK on her fourth termination of the match to push AU into a timeout. Madi Skinner ended the set with her seventh kill of the set to push UK into the lead. Skinner hit .600 in the set and UK hit .567 led by 16 assists from Emma Grome as the Wildcats had five players with three or more kills in the opener.

An Azhani Tealer service run gave Kentucky its largest lead of the match as six in a row put UK in front 15-7 at the media timeout of the second set. Madi Skinner’s 10th kill of the match put the exclamation point on the run, as she was hitting .643 in the match to that point and Bella Bell had a huge block midway through the run to keep things going for the Wildcats. The run continued on the other side of the timeout as Skinner’s 11th kill was an off-speed shot from the left pin to make the run 10-0 and Auburn called its first timeout, trailing, 19-7. The run went a season-long 14 points unanswered by Tealer, who led UK to a .565 hitting percentage in the third set as Skinner’s 12th kill pushed UK to set point and an Auburn error ended the frame with Kentucky taking the second set, 25-8. It was Kentucky’s third-largest margin of victory in a single set this season, and largest in SEC play.

Kentucky won the first five points of the set to get off to a fast start and take control of the third. Skinner continued to impose her will on the Tigers, as her 14th kill of the match sent UK into a 15-6 lead and a timeout. Skinner to that point had three blocks and a pair of digs to pair with her 14 kills and the Wildcats won six points in a row off the back of an Emma Grome service run to push its lead to 15-6. Skinner’s fourth block of the match pushed UK’s lead to 10 for the first time in the set and her 15th kill of the match made it 18-6. After a kill by Skinner to push her match total to 16, Auburn called its first timeout, trailing 19-6 and Kentucky just six points from the finish line. An Azhani Tealer overpass kill ended the match and the Wildcats swept Auburn for their sixth-straight sweep and sixth-straight win of the season.