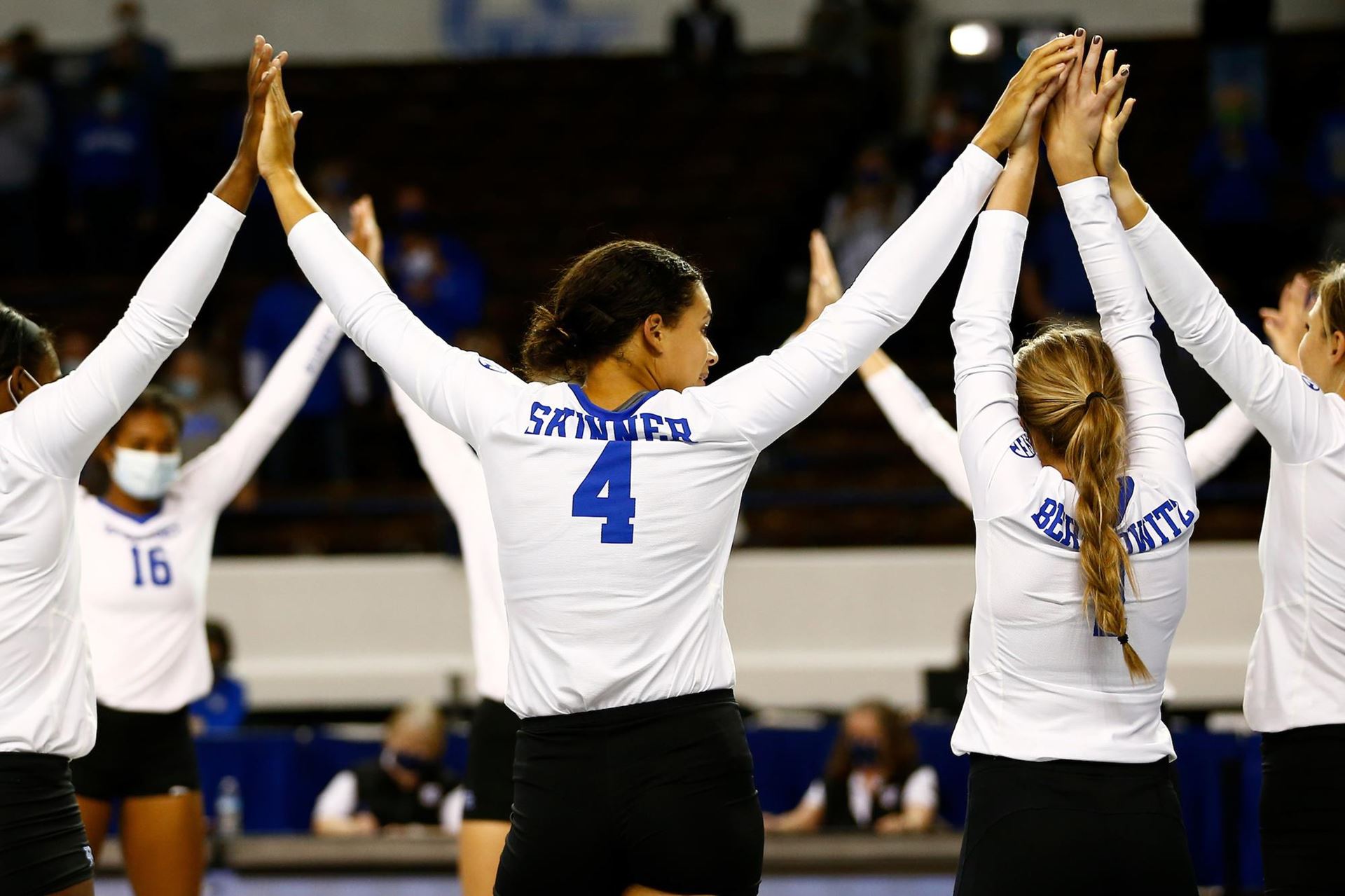 Skinner’s 21 kills went alongside a .391 hitting percentage and two blocks on the night, as she accumulated 23 points for the Wildcats on Saturday. Kentucky as a team had two players in double-digit kills with junior Alli Stumler racking up 15 terminations on 42 swings. As a team, UK hit .275 in the match and over .400 in the fourth set.

Madison Lilley, a senior setter for UK had 48 assists in the match, to lead all players. Lilley recorded her second double-double of the season in as many matches as she coupled 15 digs with her 48 assists.

On the defensive side, Kentucky was fantastic, holding the Lady Vols to a .101 hitting percentage in the match and never above .135 the entire match. Three UK players had double-digit digs, led by Lilley’s 15. Additionally, Gabby Curry and Stumler both recorded 13.

Kentucky will have a bye week next weekend before retuning to the court on Wednesday, Oct. 28 at 9 p.m. ET at No. 8 Missouri for the first of a two-day series with the Tigers live on ESPNU. The second match of that series will be Thursday night at 9 p.m. ET on ESPNU from Columbia.

An early trio of kills by Avery Skinner and trio of digs by Alli Stumler created the first bit of separation in the first set, as Kentucky took an 11-8 lead, going on a 5-1 run to push the Lady Vols into their first timeout of the match, trailing by three. Elise Goetzinger kept the heat coming with a huge kill on an extended rally to put the Wildcats up 12-8 as the breakaway train got steam for UK. After Kentucky stretched its lead to 19-12, Tennessee went on a 4-0 run and closed the gap slowly to as little as two at 20-18. Following a Kentucky timeout, a timely kill from Azhani Tealer kept the Wildcats on balance until UK gained set points. Leading 24-22, Kentucky dropped the final four points including the last two points on illegal attack calls and UT took the opening set, 26-24.

Kentucky was much more clinical and representative of Friday night’s match in the beginning stages of set two, as the Wildcats took an 11-6 lead forcing the Lady Vols into an early halt of play. A 3-0 run in the middle of the frame punctuated by three great sets from Madison Lilley was one of the major difference makers, as UK began to stretch out its lead to five before Skinner’s sixth kill put UK up six at 13-7. Tennessee again closed the gap going on a 5-0 run and Kentucky’s lead dissipated to one at 13-12, prompting a timeout by the Wildcats. Tennessee took its first lead of the set at 15-14 and stretched it out to 18-16 before UK took its final timeout. A net violation call went UK’s way to even things back up at 18-18 and things were tight the rest of the way. Kentucky gained the first set point at 24-23 and Lauren Tharp made a fantastic dig along the back line setting up Lilley to deliver service to Skinner for the set-ending kill, her 14th of the match.

The third set was tight in the beginning stages, with neither team garnering more than a two-point edge in the first 30 points of the frame. Kentucky won three points in a row to take a 14-12 lead and those two points held up into the media break as the Wildcats led 15-13 at the stoppage. Goetzinger recorded her second stuff of the net at 18-16 to give UK a three-point lead, its largest of the set – and Tennessee took a timeout because of it. Kentucky stretched its lead out to three late, and an Alli Stumler kill on the left side ended the frame and put the Wildcats up two sets to one with a 25-22 win in set three.

Kentucky played its best of the night in the fourth set, cruising in the middle part of the frame to get an eight-point lead at 17-9. Tennessee took a timeout after a ruthless Reagan Rutherford block to give UK a 6-4 lead and the Wildcats seized all of the momentum to run away and hide – at one point doubling up Tennessee, 18-9. In that stretch, UK won 10 of 12 points and seven in a row at one point. Kentucky pulled away late, winning the match 25-13 in the final set.