Stumler and Curry Lead Kentucky to Road Win at LSU 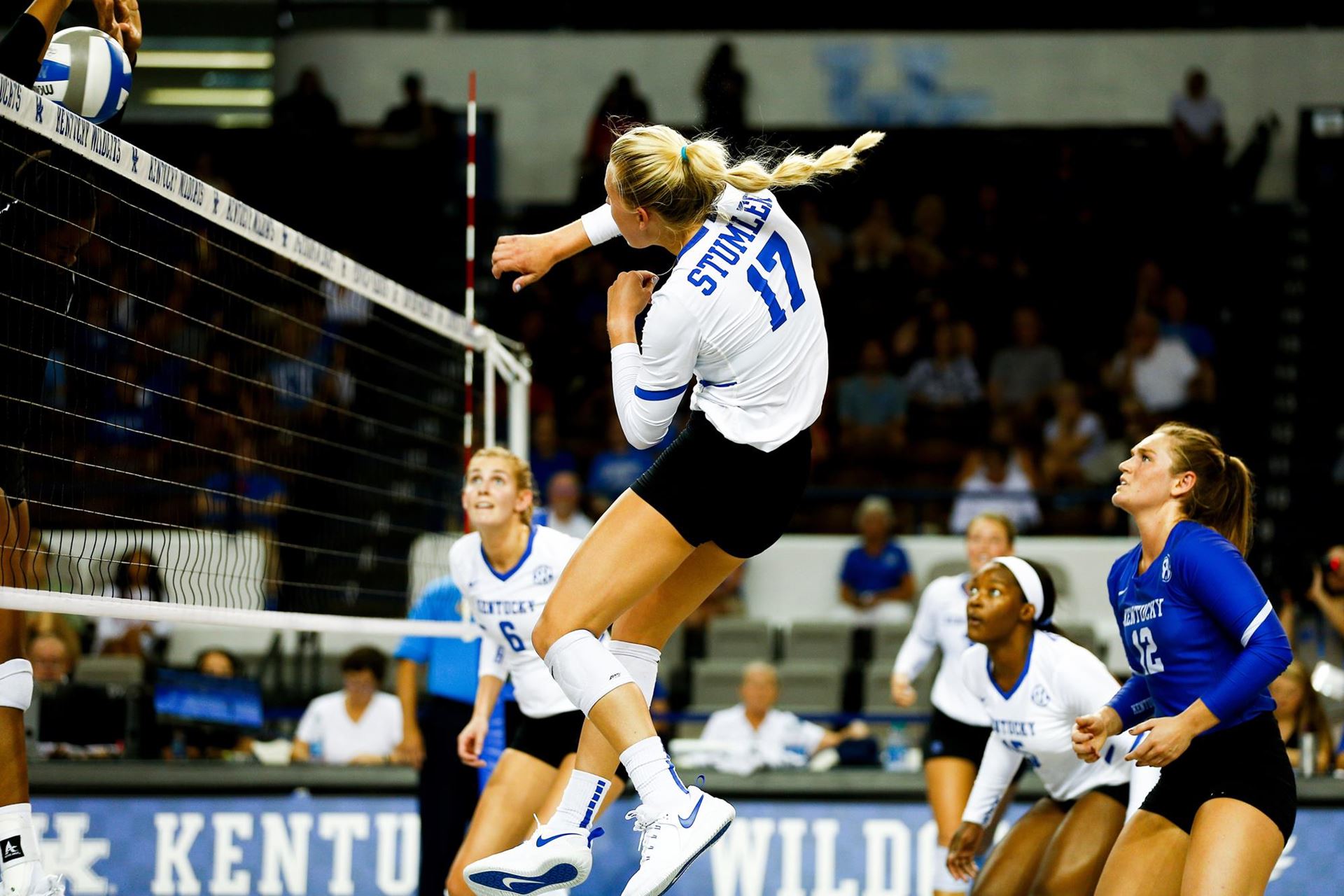 Sophomore outside hitter Alli Stumler had 16 kills to lead all players for UK in the match and Leah Edmond had 15 kills and 18 digs in an impressive effort for UK. Gabby Curry had 23 digs in the match, one of four players with double-figure digs.

Kentucky will end the regular season at home inside of Memorial Coliseum at 1 p.m. ET on Saturday afternoon against Ole Miss. The match will be shown live on the SEC Network+, ESPN3 and the ESPN app. Senior Day ceremonies to honor Leah Meyer, Leah Edmond, Kylie Schmaltz and Caitlyn Cooper will begin shortly after 12:40 p.m. ET. Admission to Saturday’s match is free for all fans.

Set One
After trading the opening points of the match, Kentucky went on a 6-0 run thanks to the serving of Leah Edmond and the defense of Madison Lilley and Gabby Curry to take an 8-4 lead in the set and force the Tigers into their first timeout. LSU responded well out of the timeout and took a two-point lead at 15-13 to force the Wildcats into their first timeout. At that time, UK was struggling offensively, hitting just .042 and had four errors. The lead was stretched out to five points when the Tigers went on a 6-0 run and took a six-point edge at 18-13 to push UK into its final timeout. LSU was able to get as big of a lead as five points at 22-17 and see things out from there, taking the opening set, 25-19.

Set Two
UK again started out the set strong, but LSU crept back into things by using a 4-0 run to take a 9-6 deficit into a 10-9 lead. Kentucky responded with a run of four in a row and took a two-point lead into the media break at 15-13 on an Alli Stumler kill – her fourth of the set in the opening 28 points. LSU rallied to win three points in a row and took an 18-17 lead in the second set and Kentucky called its first timeout of the set. Kentucky had two set points, at 24-23 and 25-24 but lost them both and LSU reeled off two in a row to make it 26-25, Tigers for the time being. Following a timeout, head coach Craig Skinner elected to challenge the previous point and won the challenge and that gave UK a set point after a net violation was detected. Kentucky closed out the second set on an attacking error by LSU at 27-26 to take an exhilarating set.

Set Three
The first lead of any substance in the third set broke Kentucky’s way midway through the frame at 17-13, forcing the Tigers into their final timeout of the set. LSU duplicated what the Wildcats did earlier in the frame, by calling a timeout and out of the timeout, successfully challenging a play to take an 11-8 UK lead into a 10-9 UK lead, just by one point. Out of the timeout with UK up a set-high four points, the Tigers won three successive points and Kentucky was pushed into its first timeout of the set leading by just one at 17-16. Skinner won his second challenge of the match to put UK ahead 24-20 and give the Wildcats four set points. LSU won three points in a row from that point to make it 24-23 and Skinner called a timeout to preserve the final set point for UK. Coming out of the break, Stumler ended an extended rally with her 13th kill of the match to put set three in UK’s favor with a termination right down the heart of the court.

Set Four
Stumler continued her dominance of the match, as she won 11 points in a row behind the service line for Kentucky to begin the frame. With an 11-0 lead and three aces in the run of serves, Stumler was up to 13 kills in the match and responsible for 16 points. With an 11-0 lead, LSU chipped away by winning five of the next six points, but Stumler at the net again ran UK’s lead up to 17-6 to restore the 11-point edge in the fourth set. Kentucky closed out the fourth set, 25-11.