Stumler and M. Skinner Overpower Florida in Sweep of Gators 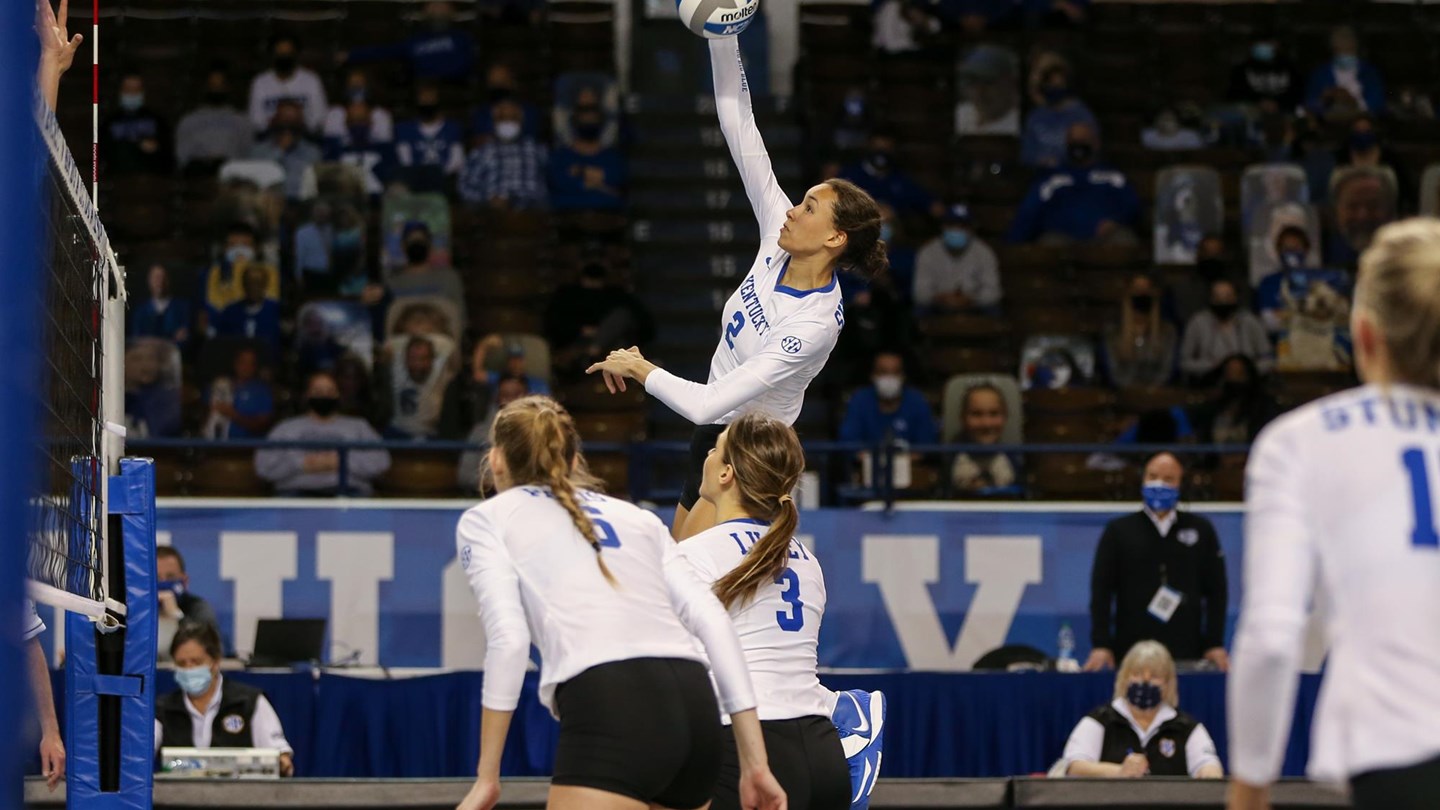 The Wildcats did just about everything better than the Gators on Saturday, outhitting UF by over .100 points, registering 10 more kills, tallying more blocks than UF and sweeping all three sets.

“I liked our response from a tough loss last night,” UK head coach Craig Skinner said. You can definitely see our team staring to empower themselves and trusting each other and trust themselves. We don’t have to be perfect, but we have to be ourselves each and every day and we did that today.”

With Saturday’s result, the Wildcats reinstate their two-match lead in the Southeastern Conference title race, which is now all but assuredly a two-horse race between Florida and Kentucky. UK is now 17-1 and Florida with the loss falls to 17-3, down two games in the loss column to the Wildcats.

The Southeastern Conference is still working through the potential rescheduling of postponed series from earlier in the spring. UK missed both the series with Texas A&M and South Carolina. News from the conference office in regards to potential make-up dates or outright cancellations of the series will be evaluated and released from the SEC office at a later date.

Azhani Tealer’s first kill of the night gassed up the Wildcats to fight a competitive battle in the beginning of the first set, taking a 15-14 lead into the media timeout. A Florida attack error followed by a service ace from Madison Lilley sent the Gators right back to the bench for a timeout, only two plays after the media break at 17-14. Madi Skinner continued the Wildcats’ race to 25, hitting .667 in the set until a three-point run from the Gators forced Kentucky into its first timeout at 21-20. Two more Azhani Tealer kills pushed Florida into its final timeout and a pair of attack errors from Florida’s T’Ara Ceasar gave Kentucky the first set, 25-20. Tealer had three kills on six swings hitting .167 in the first set.

Two early kills from Alli Stumler set the pace for the Wildcats to grab the lead and maintain it for the entirety of the set. After Florida called its first timeout at 8-3, the Gators began to make a five-point run, chasing Kentucky into its first timeout and only trailing by two points at 11-9. At the turn of the time out, a series of attack errors were exchanged between both teams, leading up to a failed Florida challenge at 19-14. Florida took its final timeout at 22-17 and the Wildcats ended the set with another pair of Madi Skinner and Stumler kills punished to the floor to defeat the Gators 25-20 in the second set, respectfully upping Madi’s total to six kills of 11 swings until that point in the match.

Madison Lilley started the beginning of the third set finale with two terminations to the floor, hitting two kills off of three swings in the set. Despite Kentucky’s failed challenge at 7-5, the Wildcats continued to charge ahead of the Gators, stealing a three-point run with kills by Avery Skinner and Alli Stumler which forced Florida into the first timeout of the set at 11-7. Madi Skinner came out of the gate after the timeout with her second kill of an impressive seven in the set before an attack error lead Kentucky to lose its last challenge of the night at 12-9. The Gators went on to advance on a four-point run to send Kentucky to its first timeout of the set at 14-13. Both teams exchanged another series of attack errors, matching the score until Madi Skinner’s series of four kills sent Florida into its final timeout at 21-18. Tealer and Stumler put up a big blue block right out of the timeout and the Wildcats won off of a Florida attack error.