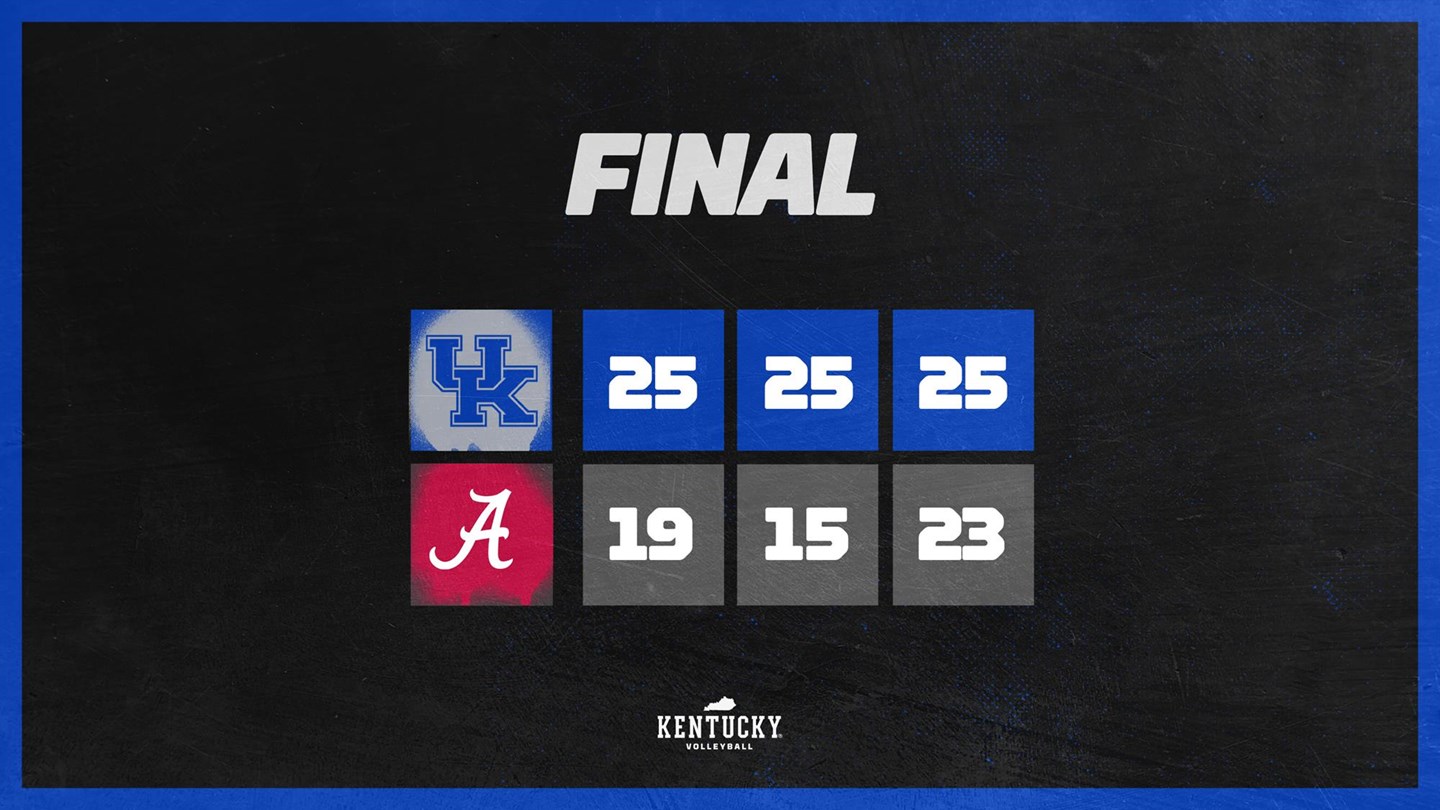 Kentucky was balanced all day offensively, with three players recording 10+ kills, and five players recording five or more kills in the match. Freshman setter Emma Grome ran the UK offense to a .277 hitting percentage for the match and had 41 assists on 46 of Kentucky’s kills.

The defense came up aces on Saturday for the Wildcats, as freshman libero Eleanor Beavin had 18 digs in the match, just two off her career high set Wednesday night against Mississippi State. Beavin was one of four players for Kentucky with six or more digs in the match as the Wildcats kept the Crimson Tide to .078 hitting for the match, including .000 in the first set alone.

With four kills inside the first five points, Kentucky jetted out to a 5-0 lead and Alabama quickly burned its first timeout following a kill by Azhani Tealer out of system from the middle. It took the Tide 13 points before getting its first kill as they cut into UK’s 10-2 lead and made it 10-3 with UK’s defensive incredibly solid to start. Kentucky’s largest lead of the set came at 20-11 and the Tide called its final timeout after Madi Skinner’s second kill of the set. Kentucky ended the set on a Bella Bell kill from the middle after a reversed challenge and took the opener, 25-19. UK hit .222 in the frame with 15 kills on 36 swings and seven errors. Bell had two blocks in the set and five Eleanor Beavin digs led the statsheet for UK. In the first.

Kentucky started strong again in the second set, leading 5-1 behind a series of kills from Stumler and Tealer. After the quick start, Alabama made a threatening run, winning three of four points to pull to within two points at 8-6 before a Rutherford termination from the right pin righted the ship for the Wildcats. That kill spurred a 4-0 run for the Wildcats as UK reinstated its lead to 13-7, the largest of the set to that point for Kentucky. Reagan Rutherford’s fifth kill of the match and second of the set pushed Kentucky into a nine-point lead at 24-15 and with the Tide down by nine, it elected to use its final timeout facing eight set points. Out of the timeout, the final point of the set was an Alabama hitting error and Kentucky took a 2-0 lead in the match with a 25-15 second-set win. Stumler was up to 10 kills in the match through two sets with Tealer not far behind, siting on seven with a .500 attacking percentage. Beavin had 16 digs, four off her career high going into the third and freshman setter Emma Grome logged 28 assists on 32 UK kills, pacing UK’s offense to a .316 hitting percentage in the second set.

Kentucky had two separate runs of three or more in the beginning stanza of the third set to take a 15-9 lead at the media break of the frame. The Wildcats were ripping the ball from all over the court as Stumler and Tealer reached double-digit kills with 10 apiece and led 17-12. Erin Lamb entered the contest with Kentucky leading by five and hammered her first-career SEC to the floor to give the Wildcats an 18-12 lead late in the third set. The Tide resisted that UK run with a 3-0 run of its own to cut the lead to 18-15 and Kentucky called its first timeout of the match with its lead at three. Alabama came all the way back to tie the set at 23-23 on a Kentucky hitting error but a kill by Tealer set up match point at 24-23 and a block secured a road sweep for the Wildcats at 25-23 in the third set.