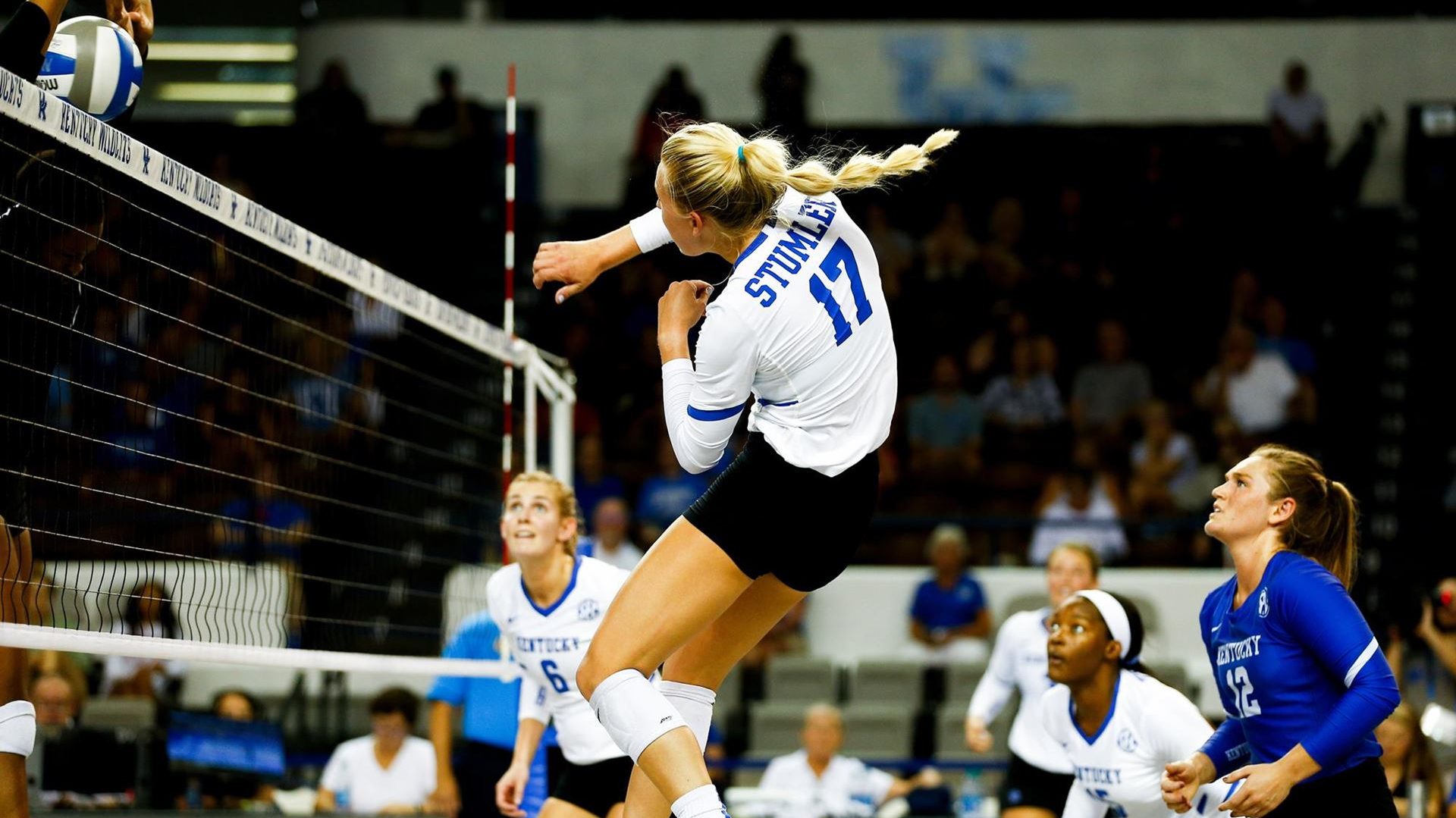 COLUMBIA, Mo. – Paced by 16 kills from sophomore outside hitter Alli Stumler, the No. 16 Kentucky Volleyball team cruised to a three-set sweep of No. 19 Missouri on Sunday in Columbia. With the win, Kentucky runs its record to 9-4 on the season and now sits atop the Southeastern Conference with a 2-0 record in league play.

Stumler was key in three major mid-set runs that the Wildcats put together to pull away late in all three sets that led the Wildcats to a sweep. After returning from a left leg injury suffered vs. Mississippi State on Friday night, Leah Edmond returned to record nine kills and also added three digs to her stat line.

“Today was a great defensive effort and I was really proud of our toughness at the end of all three sets,” UK head coach Craig Skinner said. “We had good blocking and it really made a big difference and stepped up against Missouri’s potent offense. It’s the second match in a row that Alli (Stumler) has stepped up and made a big impact for us. It was great to see Leah Edmond tough it out and make an impact in the match.”

Kentucky will return home to Lexington for a Friday night showdown against South Carolina at 7 p.m. ET. The match will be shown live on the SEC Network+, ESPN3 and the ESPN app.

Missouri got off to a hot start, leading by as much as four points at 14-10. After the Tigers took the 14-10 lead and went on a 4-0 run, Kentucky called a timeout facing its largest deficit of the set at that point. Kentucky was then able to claw back into the set as Leah Meyer threw a ball to the floor and that was followed by two Mizzou hitting errors to make it 15-14 Tigers, and force the Tigers into a timeout on Stumler’s service run. Missouri responded well out of the timeout and took back control of the set extending its lead to 20-16 off a pair of kills and a service ace. Kendyl Paris made her mark on the match in the following sequence, sending a ball to the floor for her second kill of the match and following that up with a solo block to pull UK to within one point at 20-19. UK took its first lead in extra points at 27-26 after fighting off four set points and an error on the Tigers ended the set at 29-27 in favor of UK.

Much like the first set, it was Mizzou that controlled the lead for a majority of the opening parts of the set. However, thanks to timely defense and great intensity at the net, Leah Meyer and Madison Lilley put on back-to-back blocks at the net to give the Wildcats a 12-11 lead and cap off a 4-0 run to push the Tigers into a timeout. Lilley’s dump on the following point upped the UK lead to 13-11 and UK was off and running. Alli Stumler’s team-leading ninth kill of the set was the difference in the end as she capped off the set with a 25-23 decision in favor of the Wildcats.

In a tight third set, Missouri took a four-point lead at 10-6 before the Wildcats rallied to score three in a row and cut the deficit to one. Neither team was able to garner a substantial lead before the media timeout, with the Tigers leading 15-13 at the break. The Tigers used that to spur a 4-0 run and force the Wildcats into a timeout, trailing 17-13. A kill from Stumler and a solo block at the net by Paris stymied the Tigers’ run and Kentucky won three points in a row to climb within one at 17-16 and push Mizzou into a halt of play. A huge stuff block at the net by Paris and Caitlyn Cooper put another exclamation point on a 6-0 run and forced Mizzou into its second timeout in four points. The run ended at 7-0 with UK leading 20-17 and the Wildcats coasted to the finish line from there.