Stumler’s Double-Double Leads No. 2 Kentucky To Sweep of Auburn 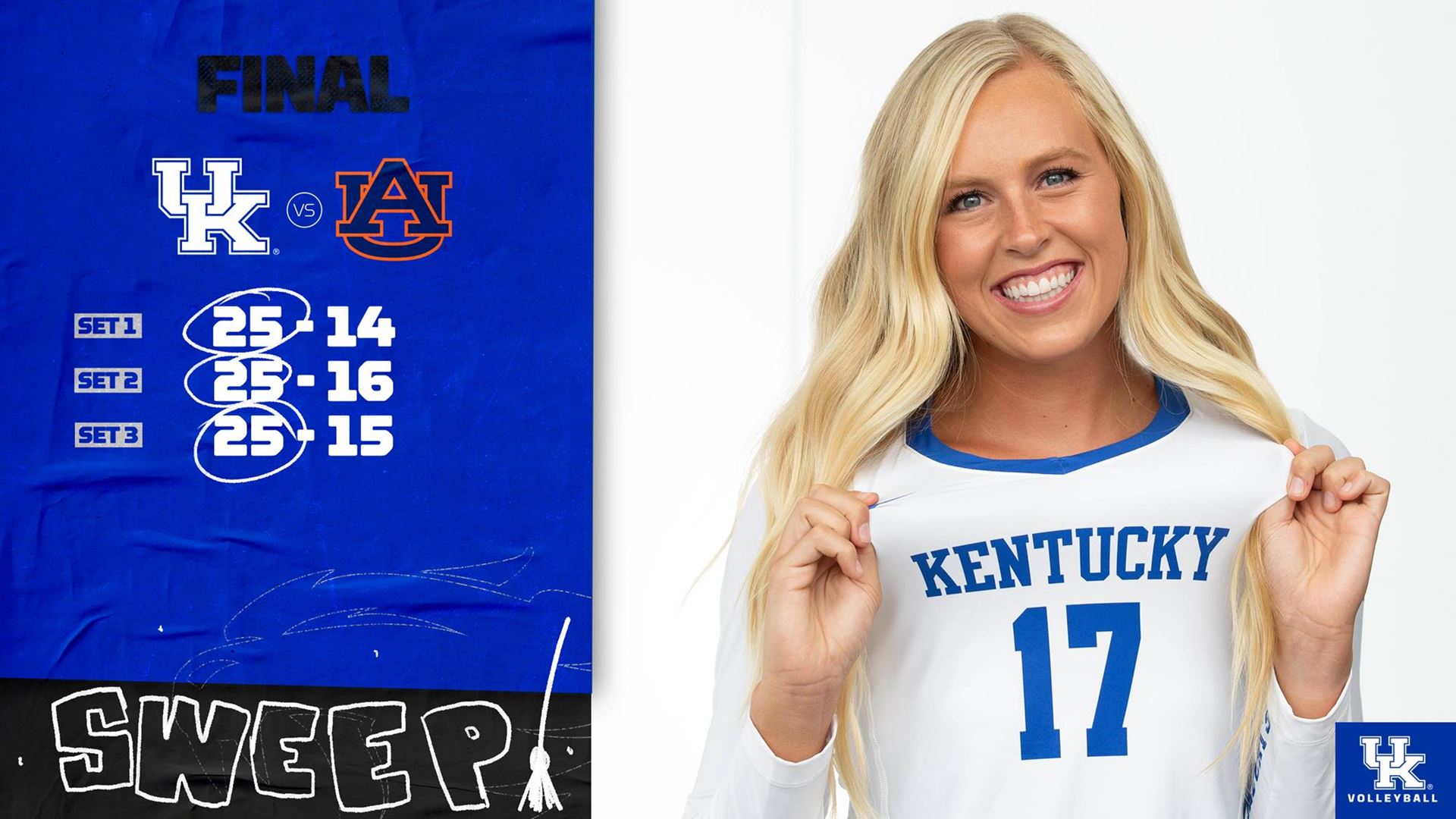 Liley leads UK offense to .385 hitting in the match

The Wildcats hit .385 on the season and held Auburn to just .149 in the match, as Stumler led a balanced offensive attack, in which she was the only UK player in double-figures for kills. Madi Skinner tallied a career-high nine kills and redshirt freshman Bella Bell had her finest night as a Wildcat, tallying six kills.

UK is now 5-0 on the season and will finish its Auburn series on Sunday afternoon at 4 p.m. ET. The match will be televised live on the SEC Network, ESPN3 and the ESPN app with Courtney Lyle and Missy Whittemore on the call from Lexington.

Set One
With Lauren Tharp at the service line firing on all cylinders, and five UK players recording two kills in the opening part of the first set, a 6-0 run carried Kentucky out to a 15-7 lead at the media timeout of the first set. The run was capped off at 8-0 and Kentucky saw itself out front 17-7 when Tharp was done serving. Following Madison Lilley’s third stuff block of the set, Auburn called a timeout trailing, 20-11 with Stumler also notching four early kills in the frame. Kentucky closed out the set, winning 25-14 to go along with a .364 hitting percentage and 12 assists from superstar Madison Lilley. UK held Auburn to -.034 offensively and tallied five blocks in the set and only withstood seven Tiger kills.

Set Two
It was another strong start for Kentucky in the second set as Lauren Tharp again was lethal at the service line and Kentucky jumped out to a 13-5 lead. Kentucky at that point was hitting .444 in the match and Auburn was still hovering around the .000 mark as Gabby Curry and Tharp combined to limit the Tigers to really tough swings. Auburn climbed back into the set with its longest run of points in the match and forced a UK timeout at 13-9 after winning four in a row. Riah Walker made some sensational plays to buoy the Kentucky offense midway through and the offensive firepower of Azhani Tealer and Stumler saw UK runaway and hide to close out the frame, 25-16 thanks to a Sophie Fischer kill, her fourth of the match to that point.

Set Three
The third set was the most competitive of the match, with Kentucky’s lead not eclipsing more than two until the midway point at 12-9. Auburn took a timeout after four-straight points on Riah Walker’s serve, as she sprinkled in an ace and helped hold the Tigers to just .146 to that point on offense in the set. Kentucky sprinted to the finish line, closing out the match with a 25-15 win in the final set.