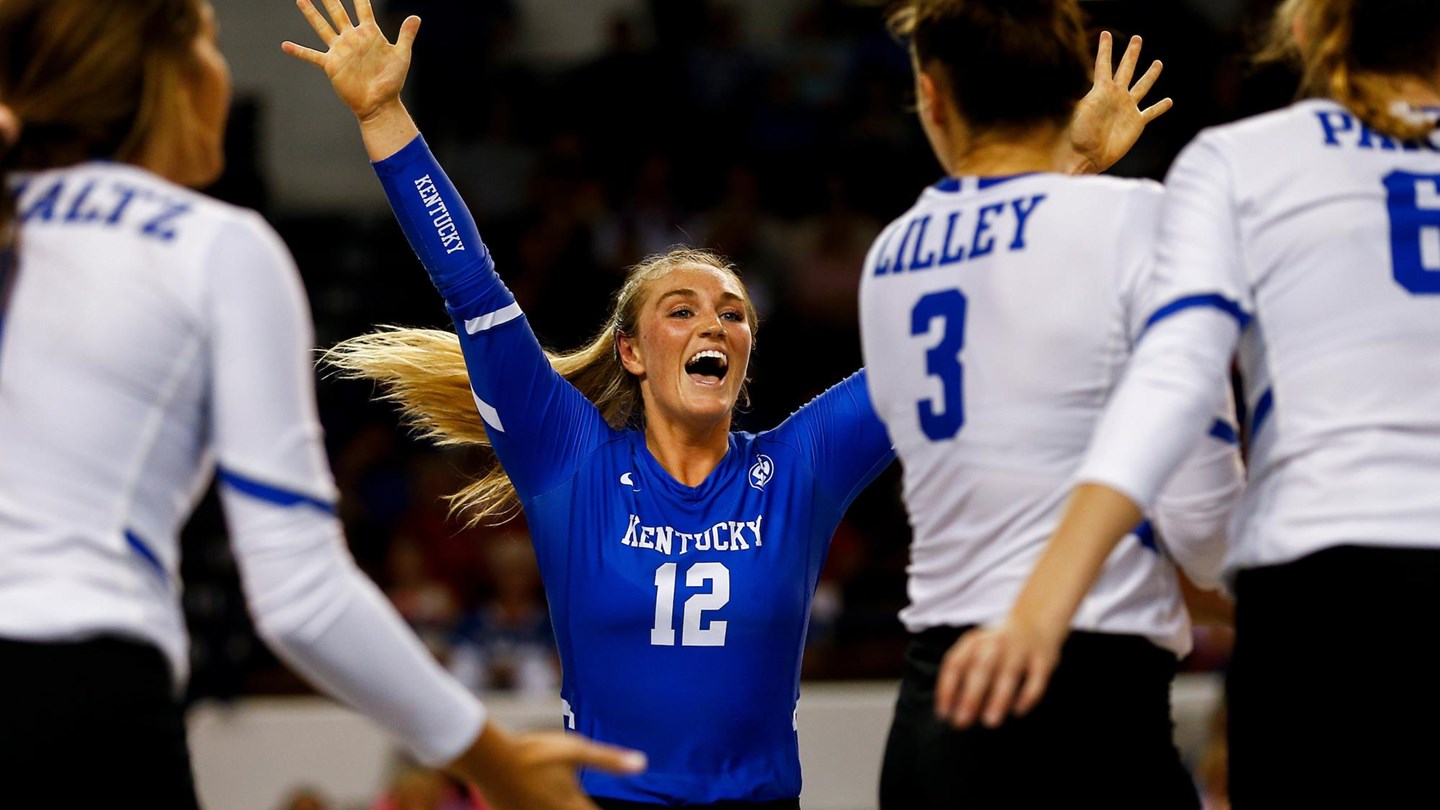 KNOXVILLE, Tenn. – Paced by 19 kills from sophomore outside hitter Alli Stumler and clutch kills in the late stages of the third set by Leah Edmond and freshman Ahzani Tealer, the No. 16 Kentucky volleyball team swept Tennessee 3-0 (25-23, 25-17, 30-28) on Wednesday night.

Kentucky’s stifling defense held Tennessee to .000 hitting in the second set, and was able to hold the Lady Vols to .218 in the match while hitting .331 in the match.

Stumler’s 19 kills are just one off of her career high set two weeks ago vs. Mississippi State in a four-set match. The 19 kills for the sophomore are the most in her career during a three-set match. She now has double-digit kills in six-straight matches this season and 15 or more in five on those six matches.

Gabby Curry continued her great start to SEC play with 18 digs and an assist on Wednesday night. Curry has double-digit kills in all but one match for UK this season.

Kentucky will close out its two-match road trip on Sunday afternoon at 3 p.m. ET in Tuscaloosa against the Alabama Crimson Tide. The match will be streamed live on the SEC Network, ESPN3 and the ESPN app.

After trailing for a majority of the opening points, and by as many as four at 10-6, Kentucky went on a 7-0 run through the serving of Alli Stumler and the swings along the pins of Leah Edmond. Edmond had five kills inside the first 21 points of the match and forced the Lady Vols into a timeout. UK extended the run to 9-0 as Tennessee had to burn its second timeout just four points later, trailing 15-11. After UK had stretched its lead to as much as five at 18-13, the Lady Vols creeped back into the set and Kentucky used a timeout at 19-17 as its lead had evaporated to two points. Kentucky got to 24 points leading by three and wasted two set points before Edmond’s eighth kill of the set closed out the frame in UK’s favor, 25-23. UK hit .347 in the set with Tennessee hitting .293 in the frame. Edmond’s eight kills led all players.

Kentucky rocketed out to a 10-5 lead in the second set and forced the Lady Vols into an early timeout just 15 points into the frame. After a kill by Stumler, her sixth of the match and a termination by Paris, her third and second of the set, Kentucky took the five-point edge. After Tennessee climbed to within three points, Kentucky reset and extended its lead to 17-10 and the Lady Vols used their second halt of play. Edmond and Stumler both had nine kills at that point in the match and was higher than any other Tennessee player. It was a convincing close to the set by UK, who ended the set 25-17 and put itself two sets to the good. In the second set, UK hit .312 and averaged a .333 hitting percentage in the match through two sets. The Lady Vols were stifled on offense, hitting .000 in the second set and .158 in the match after two. After only one block by Kentucky in the first set, Kentucky countered with four blocks in the second frame to take a 5.0-4.0 lead in the total blocks count.

Kentucky and Tennessee traded leads in the early part of the third set, with neither team garnering more than a one-point lead until Tennessee took a 15-13 lead and Kentucky called its first timeout off of an attacking error. The Lady Vols took a 20-15 lead and Kentucky called a timeout to try and stifle the Lady Vol momentum. Following that, Azhani Tealer took a few huge rips from the outside and pulled the Wildcats to within one point at 21-20 after the freshman’s second kill of the night. Tennessee had three set point opportunities to win the frame and push the match to a fourth set, but clutch kills by Edmond, Stumler and Tealer kept UK alive before the Wildcats took their first lead of the late stages with a 28-27 advantage. Following back-to-back sideouts, Azhani Tealer ended the match with a huge swing from the right side that went off the Tennessee block and out of bounds to end it. The third set alone featured 21 ties and nine lead changes.