The Birthplace of Speed – Daytona Beach – Welcomes Road Course Racing in the 1930s as NASCAR Founder Bill France Sr. Begins Promotion of a Sport he loves 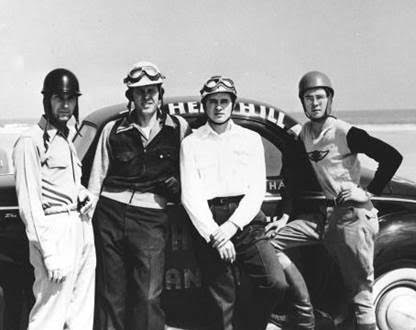 Big” Bill France, Sr. (second from left) stands with drivers (L to R) Smokey Purser, Roy Hall and Sammy Packard before a stock car race on the Daytona beach-road course in 1940. Hall won the race with Big Bill finishing fourth, Purser fifth and Packard 19th. Big Bill would eventually give up driving and focus on promoting road course events at Daytona Beach as well as the creation of today’s NASCAR’s Cup Series. (Photo by ISC Images & Archives via Getty Images)

As NASCAR’s three national series get ready to make their historic first attempts at the DAYTONA Road Course inside the Daytona International Speedway on Aug. 14-16, let’s take a look back at how road course racing began in Daytona Beach, “The Birthplace of Speed.”

The history of automotive competition in the Daytona Beach area goes back to 1903. It is recorded that it started with a friendly wager between two men debating who had the fastest horseless carriage. The wide, hard-packed sands of “The World’s Most Famous Beach” were the scene of more than 30 years of speed trials.

Then in 1935, the final speed trials were held, and moved to the Salt Flats in Utah. To continue the legacy of speed, stock car racing began on the beach in 1936. The concept was racing modified stock cars on a circuit that utilized both the Atlantic shoreline and the pavement of State Road A1A, the legendary oceanfront road. The original 3.2-mile course had the north turn located near the center of town. It ran approximately 1.5 miles north on the beach and then 1.5 miles south on a paved, public roadway with two portions connected by banked, sand turns.

Entered in the event was a larger-than-life man named “Big” Bill France. He witnessed the final year of speed runs on the beach and was fired up about what Daytona meant to auto racing on a global scale. His enthusiasm was largely born out of being a competitor, even though the idea of promoting races was lurking in the back of his mind. He finished a solid fifth in the 250-mile event, and knew that he could win stock car races on a regular basis, but also if pressed into service, he could be a successful promoter.

The first couple of years the road course was losing money, and the local chamber of commerce approached Big Bill, asking if he could help find a promoter for the road course. The idea of promoting a race excited him, and he told city officials he was the perfect man for the job. While driving a race car at various tracks across the Southeast, owned by Daytona Beach restaurant owner Charlie Reese, Big Bill asked Reece if he would give support financially to help him promote the beach course. A partnership was formed, and Big Bill began to wear two hats.

In 1939, Bill Sr. accelerated his driving and promoting ambitions, and the Daytona beach-road course was becoming successful. Behind the wheel in races on the beach-road course, he finished fourth and second, and a year later, he had a break-through victory, along with other track wins to win an “unofficial championship” crown. He would promote races on the beach and at various tracks in North Carolina before the attack on Pearl Harbor in December 1941, which halted racing. Post war in late 1945, the Daytona beach-road course needed a tune-up and renovations after several years of inactivity, and in the spring of 1946, stock car racing was reborn.

The realities of a growing Daytona Beach populace on the beachside forced Big Bill to abandon the original 3.2-mile layout at the end of 1947. He was running out of room to both race and provide space for spectators.  A new 4.1-mile course near Ponce Inlet was created in 1948 where the stock cars would compete.

On Feb. 21, 1948, NASCAR would become officially incorporated. Big Bill would be in charge of the new sanctioning body, promoting not only races at the beach-road course but a full championship schedule as well. NASCAR was founded on the simple idea that many people loved revved-up engines and fast cars as much as Big Bill did.

The modified stock cars that had been competing was not the only direction Big Bill wanted to go in moving forward. In 1949, he demonstrated his determination for a vision he had years earlier, but had been delayed by the war. From 1942-46, a small amount of consumer cars had been built, reducing the availability of the machines from showroom floors by the car manufacturers. It was now time for his “Strictly Stock” concept (what would become known as the Grand National Series, and years later, the NASCAR Cup Series), a series for new sedan cars, that would produce a national championship series.

A limited number of fans will get the opportunity to see NASCAR’s return to road course racing in Daytona for the Go Bowling 235 At The DAYTONA Road Course, along with the NASCAR Gander RV & Outdoors Truck Series race on Sunday, Aug. 16. Fans can get tickets, which start at $49 (both races included) for adults and $10 for kids 12 years old and younger, by visiting www.daytonainternationalspeedway.com or calling 1-800-PIT-SHOP.