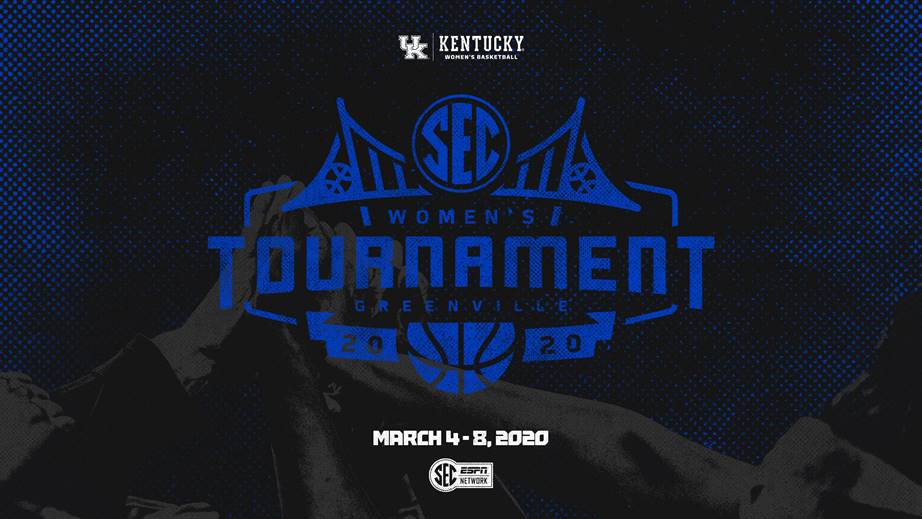 Wildcats will play winner of Tennessee/Missouri on Friday at approx. 8:30 p.m. ET in Greenville, S.C.

GREENVILLE, S.C. – As the calendar turns to March, postseason basketball arrives, and the No. 16 University of Kentucky women’s basketball team will begin its postseason run Friday night in the quarterfinals of the 2020 Southeastern Conference Tournament inside Bon Secours Wellness Arena.

The quarterfinal matchup will be broadcasted on SEC Network with Courtney Lyle, Carolyn Peck and Andraya Carter on the call. The action can also be seen through WatchESPN on computers, smartphones or tablets. Darren Headrick will have the call on the UK Sports Network on 630AM WLAP in Lexington. Live stats and complete tournament information will be available at secsports.com, while free live audio will be available at UKathletics.com.

The Wildcats earned the three seed in the event after finishing the regular season 21-7 and 10-6 in league play. This is the first ever three seed for Kentucky, who has been a top-four seed 11 times including 10 under 13th-year head coach Matthew Mitchell. This was the 10th 10-win league season for Kentucky all-time with all 10 coming under Mitchell’s leadership.

Kentucky holds a 35-40 (.466) all-time record in the SEC Tournament, including a 16-12 mark under Mitchell. UK is 15-14 all-time in quarterfinal games, 5-10 in semifinal games and 1-4 in championship games. Last season, UK lost in the quarterfinals vs. Missouri marking only the second time under Mitchell that UK has not won at least one game in the event.

The Wildcats are coming off a strong regular season that saw them ranked inside the top-20 of the Associated Press Top 20 all season long. UK has been paced by its 3-point shooting, hitting 235 from distance this season, which already ranks second most in program history. The high number of makes ranks 22nd nationally and second in the league, while the team also sits 18th nationally and second in the league in 3-point field-goal percentage at 36.4 percent. Kentucky is averaging 72.5 points per game while limiting opponents to 59.5 points per game. The Wildcats have a +8.25 turnover margin that ranks third nationally and first in the SEC.

Tennessee tied with UK for third in the league with 10-6 mark in conference while the Lady Vols are 20-9 overall with an NCAA RPI of 59. The Wildcats have won three of the last five meetings against the Lady Vols, including the lone meeting this season in Lexington, 80-76 back con Jan. 5. Even with the recent success, Tennessee still leads the overall series 55-13. UK has never beat the Lady Vols at a neutral site and are 1-7 against Tennessee in the SEC Tournament, including a 0-4 mark under Mitchell. Seven of UK’s 13 all-time wins vs. Tennessee have come under Mitchell.

Missouri is coming off a 64-53 win over Ole Miss in the first round of the SEC Tournament on Wednesday and own a 9-21 record overall. The Tigers have an NCAA RPI of 167 after playing the 16th-toughest schedule in the nation this season. Kentucky and Missouri met last season in the SEC Tournament and put together an instant classic with the Tigers prevailing in overtime, 70-68. That was the lone ever meeting between the two teams in the event. UK leads the all-time series in games played against Missouri, 8-4, after taking down the Tigers in Columbia earlier this season, 64-47. Ten of the 12 all-time meetings have come under MM, holding a 7-3 record.