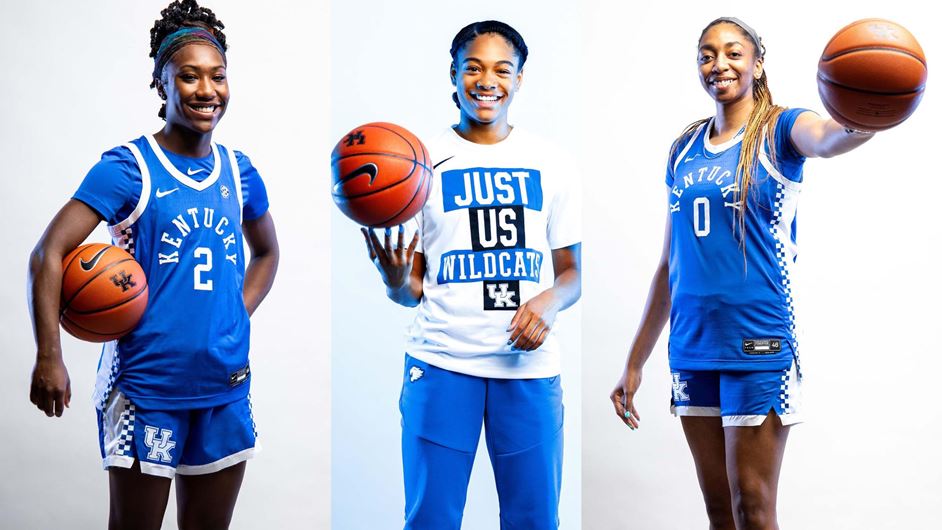 Three University of Kentucky women’s basketball signees – Tionna Herron, Amiya Jenkins and Saniah Tyler – have all been named 2022 McDonald’s All-American Games nominees, making them some of the best high school seniors in the nation.

The 45th annual game will return this year after two years off due to COVID-19. Final rosters will be named in the coming weeks before the 2022 game in Chicago in March.

Herron, a 6-foot-4 post from DeSoto High School in DeSoto, Texas, is a four-star prospect by ESPN.com. Herron is ranked as the 11th-best post and 69th overall player in the 2022 class. The physical post was evaluated in June of 2020 at the Yellow Rose of Texas event by ESPN as an “athletic front-court prospect that impacts in the low-post; footwork, rises over the defense and delivers in traffic; a defensive stopper, shot blocker; mobile in transition game; a stock-riser in the class of 2022.” Last season, she helped DeSoto go 28-2 and win the Texas Class 6A State Championship. The impressive season led DeSoto to be ranked preseason No. 1 in the 2021-22 Preseason MaxPreps Top 25. Herron was named a Texas Association of Basketball Coaches All-State selection last season averaging 12 points, eight rebounds and three blocks per game.

Jenkins, a 5-foot-10, guard from Anderson County High School in Lawrenceburg, Kentucky, is a four-star prospect by ESPN.com. Jenkins is ranked 31st at her position and 94th overall. She was named the 2021 MaxPreps Kentucky Player of the Year for her impressive junior season where she led Anderson County to a 28-3 record and a semifinal appearance in the Girl’s Sweet 16. A front-runner for Kentucky Miss Basketball, Jenkins played in 28 games, averaging 17.2 points per game as a junior. During the 2020-21 season, she hit over 54 percent from the field and was named to the Lexington Herald-Leader All-State girls’ basketball first team. As a sophomore, she played in 36 games, averaging 15.2 points per game while hitting 57.3 precent from the field. She helped Anderson County to the 30th District and Eighth Region championships as a sophomore, winning one game at the KHSAA Girl’s Sweet 16 before it was canceled due to COVID.

Tyler, a 5-foot-6 guard from Incarnate Word Academy in Florissant, Missouri is also a four-star prospect by ESPN.com. The outlet ranks her as the 22nd best point guard in the 2022 class. ESPN.com evaluated Tyler at the Raatz-Fence-O’Sheas Classic as an “athletic floor leader with a scoring punch in the back court; physical off the dribble, drives and delivers in traffic; mid-range offensive threat extends to the arc; defends, disrupts.” She had an incredible junior season for Incarnate Word in 2020-21, averaging 12.7 points, 3.2 rebounds, 5.3 assists and 2.2 steals per game. The guard hit over 70 3-pointers as a junior, shooting 35.7 percent from the 3. A true floor leader, she led her team to an undefeated 29-0 record and state championship last season. Tyler was named to the 2021 St. Louis American “Fab Five” Girls All-Star Team as a junior and shined in the postseason, scoring 21 points in the state quarterfinals. As a sophomore, she averaged 11.8 points, 4.3 assists and 2.6 steals, hitting a last-second 3-pointer in the state quarterfinals to help her team to the semifinals of the event before it was canceled due to COVID.