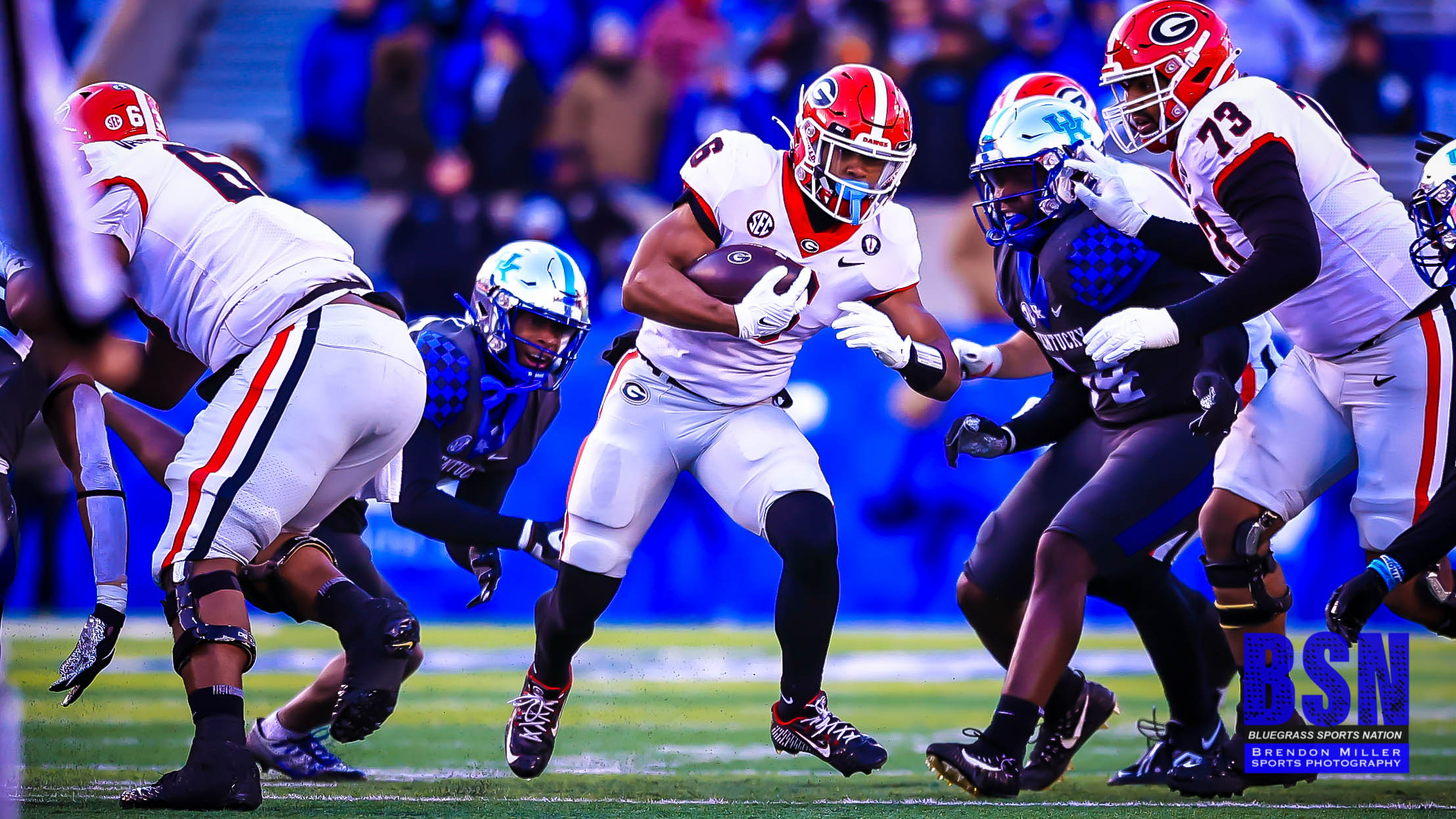 Kentucky finished SEC play hosting the Number one ranked Georgia Bulldogs.  Entering the season expectations were this game would decide the SEC Eastern Division with a trip to the SEC Championship on the line. Kentucky has dropped four games on the season including last week’s disappointing loss to the Vanderbilt Commodores.  Georgia has been dominating all season with an undefeated record and is projected to compete in the College Football playoffs. Today’s game against Georgia has been sold out for months, but todays weather being cold and windy did affect the attendance of the spectators.

In the first half of the game, Georgia converted on three field goals with the leg of kicker Jack Podlensey with successful attempts of twenty- seven yards, thirty- four yards and, and thirty- seven yards.  Kentucky had some success moving the ball in the first half but were unable to put points on the board.   Will Levis had one blemish in the first half with an interception in the endzone.  The Kentucky running game was stopped by the solid Georgia defense and Kentucky Star running back Chris Rodriguez only gained thirty yards on fourteen carries, averaging 2.1 yards per carry.  Defensively Kentucky contained Georgia as the Bulldogs only scored on three field goals, not three touchdowns.  Georgia found success on the ground led by Running Back Kenny McIntosh gaining fifty-seven yards on six attempts with an average yards per carry of 9.5.  At intermission Georgia led Kentucky 9-0.

In the second half Georgia increased the lead with a nine-yard rushing touchdown by Running Back Kenny Mcintosh.  The bulldog Defense controlled the game and offensively Georgia was on the verge of adding to the lead with another touchdown by Mcintosh.  In the opening play of the fourth quarter the Kentucky defense held strong stopping Georgia on a fourth and goal at the one-yard line.  The defensive stop was huge and gave Kentucky momentum on the ensuing offensive drive.  Kentucky completes the drive with a nine play- ninety-nine-yard drive completed by a Levis Touchdown to Barion Brown.  The score would be the last score of the game, but Kentucky continued to build on the momentum created by the fumble and put together one drives that got the ball near the redzone.  In the end Georgia lived up to the hype being the #1 ranked team in the country and hung onto to defeat Kentucky in a closer than expected game, defeating Kentucky 16-6.

1st Quarter– Kentucky received the kick on the opening possession and was unable to score on the opening possession.  Kentucky put together a good opening drive together with an eleven play sixty-four-yard drive.  Levis had one highlight early in the quarter completing a thirty-one-yard pass to Brown and crossing midfield, Kentucky couldn’t complete the drive with points on the board though as Georgia adjusted to the Kentucky offense and shut down the run.  Georgia scored on their first possession of the day with a twenty- seven-yard Field Goal by kicker Podlenesey.  At the end of the first quarter Georgia led Kentucky 3-0.

2nd Quarter– Georgia added to the lead in the second quarter with a pair of made FG by kicker Podlenesy.  Kentucky had one possession that could have put points on the board, but a costly interception in the endzone by Levis prevented the CATS from scoring.  Kentucky really struggled to move the ball in the second quarter against a solid Bulldog defense.  Kentucky had two offensive drives in the quarter with one ending in an interception, and the other possession going three and out.  Georgia found success early on with the rushing attack of Mcintosh.  Mcintosh routinely picked up first downs and his speed and downhill running made tackling difficult.  Kentucky was on the verge of being down three scores, but the defense only gave up a pair of Field goals by Podlenesy.  Podlenesey converted on a twenty- four-yard Field goal early in the quarter, and as time was expiring split the uprights with a thirty- seven-yard Field Goal.  At intermission Georgia led Kentucky 9-0.

4th Quarter– Georgia was on the verge of adding to the lead in the opening drive of the fourth quarter.  In the third quarter Georgia continued to have success running the ball with McIntosh and had the ball at the Kentucky one yard line, facing a fourth and one.  The Kentucky defense was superb and prevented the Bulldogs from scoring.  Up to this point in the game, Kentucky really struggled to move the ball against the Bulldog defense.  Kentucky completes this drive with some impressive plays by Levis, Brown and running back Rodriguez.  On one play Levis completed a pass downfield to Brown gaining forty-seven yards and had the ball near midfield.  The next play Rodriguez completes his best run of the night drive with a gain of fifteen yards. Levis finished the drive with a passing Touchdown to Brown for an eight-yard passing touchdown.  Kentucky cut into the lead with the score Georgia 16- Kentucky 6.  This would be the last score of the game, but Kentucky had chances to score again.  The Kentucky defense held Georgia to three and out forcing a punt, the only Bulldog punt of the game, and Offensively the CATS had success moving the ball.  On Kentucky’s next possession Kentucky moved the ball gaining seventy yards of offense on the possession.  Kentucky faced a fourth down and relied on the leg of kicker Matt Ruffalo to convert on a thirty-eight-yard field goal, but the attempt was unsuccessful.  Georgia hung on to defeat Kentucky 16-6 in a much closer game than expected, and Kentucky made the game respectable.

Kentucky drops on the season to an overall record of six wins and five losses.  Next week Kentucky will complete the regular season at home hosting in state rival the Louisville Cardinals in the Governor’s Cup on Senior Day.  Next week’s matchup against the Cardinals will determine if the CATS finish with a five hundred record or go into the post season with a winning record.  Louisville will enter next weekends matchup with a seven win and four loss record and will look to ruin Kentucky’s season.