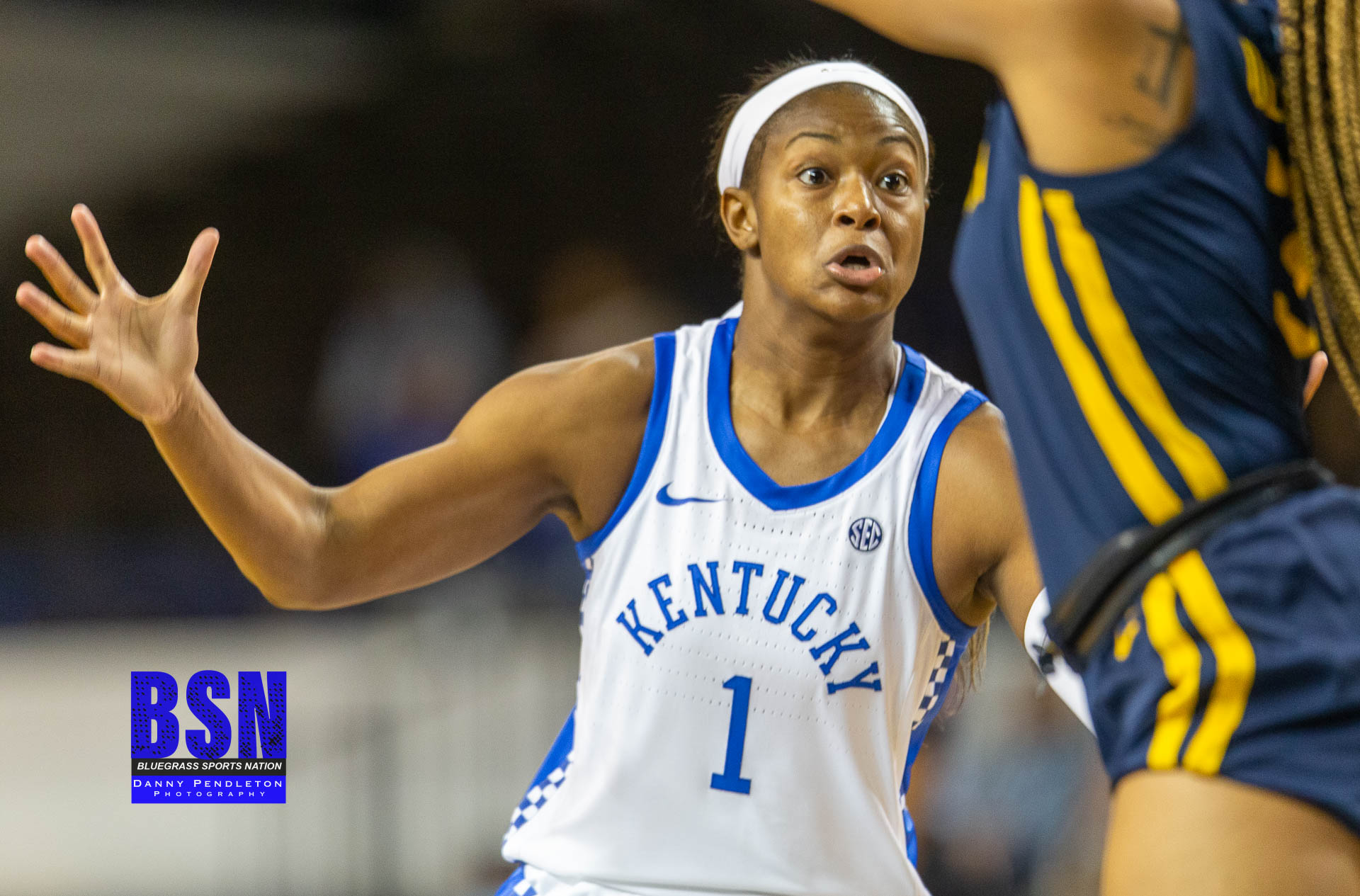 Wildcats will return to action Sunday vs. Merrimack College at 2 p.m. ET inside Memorial Coliseum

Dre’una Edwards also had a big game for the Cats. The Compton, California, native had 19 points, 10 rebounds and a career high six blocked shots for Kentucky. That marked the most blocked shots by a UK player since Alexis Jennings blocked six against Oklahoma in the NCAA Tournament on March 21, 2016.

Kentucky had a 21-5 edge in second-chance points, a 20-14 advantage in bench points and UK had 17 points off WVU turnovers.

The Cats, and specifically Howard, scored the first five points of the game. West Virginia would score the next five, before Edwards gave UK a 7-5 lead on a jumper in the lane with 6:45 left in the period.

After Edwards put UK ahead 9-7, WVU took its first lead on a Kirsten Deans three with 5:01 left in the first. But Kentucky got a basket from Olivia Owens and a three from Howard to lead 14-10 with 3:47 remaining in the first.

But the Mountaineers closed the first period on a 7-2 run and led 17-16 after 10 minutes of play.

Early in the second quarter, WVU took a 19-16 lead on a pair of Esmery Martinez free throws. But the lead lasted just 27 seconds as Treasure Hunt tied it at 19 apiece with a right corner three-pointer.

West Virginia would grab a 23-21 lead before Jada Walker had a spectacular 10 seconds. First, she a hit a wide open three from the right side to give UK a 24-23 lead. Then, just seconds later, Walker stole the inbounds pass, laid it in and was fouled. She missed the free throw but Walker’s five points in 10 seconds gave UK a 26-23 lead with 5:42 left in the half.

Walker’s play seemed to inspire the Cats. Including her five points, the Cats went on an 11-2 run that gave Kentucky a 32-25 lead with 3:19 to play in the half.

After WVU got a basket from Martinez, Howard hit a three to extend the UK advantage to 35-27. WVU would get two free throws before Jazmine Massengill hit a three to give UK its biggest lead, 38-29, with 2:38 left in the half. The Cats would lead 40-31 at the break.

With the first possession of the second half, UK went to Howard and she delivered with a basket in the paint to extend the lead to 42-31. UK would hold a 46-36 lead before WVU got five in a row from Deans to cut the lead to 46-41 with 6:43 left in the third.

Kentucky would respond by making four of six free throws, the last three by Howard, to lead 50-41 with 5:10 left in the third. Then, Howard nailed a three from the top of the key to give the Cats a 53-41 advantage. Edwards would score in the lane on UK’s next possession, the final points of a 9-0 run that gave the Cats a 55-41 lead.

The Cats would finish the period on a 7-2 run and took a 62-45 advantage into the final stanza.

Kentucky opened the fourth quarter by extending the lead even more. UK got two layups from Walker a a jumper from Robyn Benton to lead 68-45 with 8:34 to play. Then, Edwards nailed a three from the right side to make it 71-45, completing a 9-0 run to begin the period. West Virginia would get within 21 but could get no closer.

Deans led WVU with 20 points, while Martinez had 14 points and 10 rebounds.

Kentucky returns to action on Sunday, hosting Merrimack at Memorial Coliseum. Tipoff is set for 2 p.m. ET and the game can be seen on SEC Network Plus.