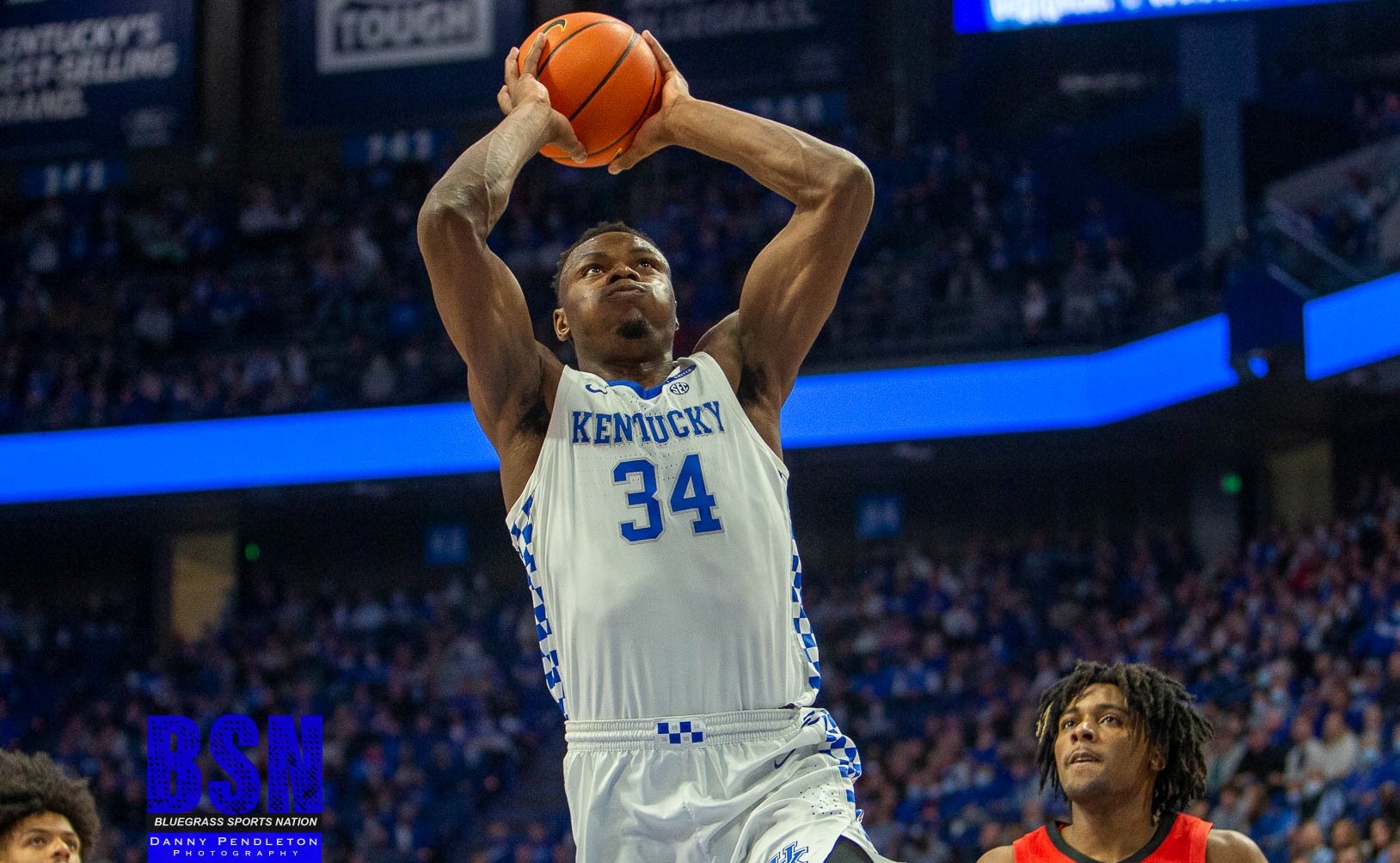 Kentucky returned to Rupp Arena hosting SEC Eastern Division opponent the Georgia Bulldogs. Today’s game against Georgia was close in the first half, with the CATS only leading by three at intermission. In the second half Kentucky gained some breathing room and put the game out of reach defeating Georgia by fifteen points. Today’s game had a new starting lineup as Jacob Toppin started the game in place of injured Wildcat Sahvir Wheeler. Wheeler did not participate in today’s game against his former team, Wheeler suffered a concussion in the previous game against LSU.

Three Kentucky Wildcats shared the spotlight in today’s game. Oscar Tshiebwe continued his All-American campaign with another double double, Oscar finished the game with a career high of twenty-nine points and grabbed seventeen rebounds. Ty Ty Washington broke the UK single game assist record, surpassing the great John Wall. Washington finished the day with seventeen points and seventeen assists. Finally it is worth noting the play of reserve guard Davion Mintz. Mintz was the spark Kentucky needed and was five for seven from behind the arc finishing the game with nineteen points.

First half- the first half stayed close as Georgia jumped out to an early lead. Midways through the half Georgia led twelve to six and was playing with confidence. Kentucky responded with a seven to zero run finished by Grady dunking the ball after getting a steal. The two teams traded baskets the rest of the half as there was never more than four points of separation through out the half. Tshiebwe finished the half with a double double finishing the half with twelve points and ten rebounds. Georgia kept the game close by knocking down their free throws as the Dawgs was a perfect seven for seven from the free throw line in the first half. At intermission Kentucky had a narrow lead of three points. Kentucky 40 – Georgia 37.

Second half- Kentucky played the first half at Georgia’s style of play at a much slower pace than Kentucky likes to play. In The Second half UK Took control of the game and pushed the ball up the court allowing easy transition baskets and eliminated the Dawgs to usually one and out on offensive possessions. Kentucky continued to throw the ball inside to Tshiebwe who took advantage of the size mismatch against the Georgia defender. Kentucky also had success breaking the press and finding spot up shooters open. Mintz was hot from behind the arch making three second half three-point field goals. Midways through the second half Kentucky had a comfortable twelve-point lead and led Georgia 66-54. The play of Washington was excellent in the second half. Washington finished the half with eleven assists, eight points and only one turnover. Kentucky grew the lead to eighteen points late in the second half and after a late nine to four run by Georgia, Kentucky hangs on to defeat the Bulldogs by fifteen points. Kentucky 92- Georgia 77.

Kentucky improved on the season with an overall record of twelve wins and three losses. Next up for Kentucky will travel to Nashville, Tennessee with a matchup against The Vanderbilt Commodores. The game will take place Tuesday January 11th, 2022, at seven pm and will be broadcast on the SEC Network.