U of L Basketball – The Case for David Padgett 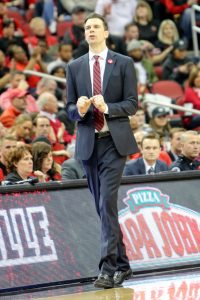 The timeline for the University of Louisville over the past several seasons has not been kind.  It started with a stripper and prostitute scandal that has threatened to take away the 2013 title, as well as the 2012 Final Four and a number of victories.  It followed that horrific scandal with one that involved paying a high profile recruit in Brian Bowen to allegedly come to U of L.  Not to mention the Bowen scandal involved the FBI.

Just when U of L fans thought it couldn’t get any worse, it did.  Both head coach Rick Pitino and long-time athletic Director Tom Jurich were fired.  Vince Tyra was named Interim Athletic Director.  Then former Assistant Coach, David Padgett, was named Interim Head Coach.  That left Louisville with an interim president, athletic director, and head coach.  Hardly what one would expect from a high profile university.

What happens next is anyone’s guess.  The 2013 title is the least of the worries.  The FBI scandal has rocked the university to its core.  Who knows how long it will take for U of L to find out its punishment.  This makes it very difficult to recruit and to attract a high profile head coach to lead the Cardinals through this tremendous ordeal.

Heading into this season, the Cardinals were predicted to be a top 10 team and challenge for the title with their Hall of Fame coach Pitino at the helm.  Even without Pitino they still had the same players coming back.  Sure, Pitino alone is worth several wins just by his coaching ability, but even without him they still could challenge even with the circumstances.

To become a head coach one has to pay their dues.  Usually it involves starting in perhaps a player personnel role and then graduating to an assistant coach.  It takes a number of years to even become a head coach at a lower tier university.  Certainly, at the age of 32, a person does not take over at a top ten program.

Enter David Padgett into the equation.  At the age of 32 he was named the interim head coach at Louisville.  This was certainly not the way he thought his head coaching career would begin.

The question now is, will David Padgett be the coach to lead U of L through their most recent scandal and keep them competitive?

So far the results have been varied this season.  They currently sit with an overall record of 16 – 6 and a 6 – 3 in the ACC, good enough for fourth place.  Their big wins so far are two road wins against Florida State and Notre Dame.  They do not have a win over a current Top 25 team.  They have only one extremely bad loss against Kentucky 90 – 61.  They have been in contention in all of their losses except Kentucky.

The record so far this season is not too shabby for a first year head coach, but is it enough to satisfy the University and its fan base?  Will the interim tag be lifted?

We may not know the answers to those until after the season.  Even then, who would want to come in and coach a team with so much uncertainty in regards to possible sanctions?  Recruiting will certainly suffer as has already been seen with U of L’s entire 2018 recruiting class decommitting from U of L.  Romeo Langford, a top five recruit and who seemed to be leaning towards Louisville, removed them from his list when the FBI scandal broke.

There is no doubt that Padgett will be a long time head coach.  It may be that this is his only year at Louisville and he moves on.  Or it could be the start of something big for him.  No coach will have an easy time recruiting in the upcoming years so maybe Padgett is the best choice.  The university gets a chance to see what Padgett can do coaching lesser tier players in the ACC.

At this point Louisville will make it to the NCAA tournament.  Can Padgett lead them on a run in the tournament?  They have the talent to do it, but can they put it all together?

Unless Louisville can land a top tier proven head coach I for one would like to see Padgett get a chance to lead this team through the upcoming years.  It will not be easy, but no coach would have it easy with the circumstances Louisville has put themselves in.  This is Padgett’s yearlong interview and so far he has done nothing to show he shouldn’t get the job.