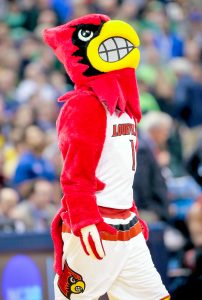 A total of 21 of the Cardinals’ 31 games will be played against teams that participated in post-season competition last season, including at least 14 from the 2017 NCAA Tournament (NCAA Tournament:  Duke, Florida State twice, Kentucky, Miami, North Carolina, Notre Dame, Purdue, Seton Hall, Virginia twice, Virginia Tech twice, Wake Forest; NIT: Clemson, Georgia Tech, Indiana, Syracuse; CollegeInsiders.com Tournament: Albany, St. Francis; CBI: George Mason).  The Cardinals will play 22 games against teams that won at least 18 games last season, including 15 that won more than 20.  The Cardinals have played a schedule ranked among the top 16 toughest by the ratings percentage index (RPI) in eight of the past 10 seasons.

“I think once again we will have one of the top schedules in the nation,” said UofL Coach Rick Pitino, whose team faced the nation’s third-toughest schedule by the (RPI) last season.  “We’ll have one of the toughest non-conference schedules including Kentucky, Purdue, Seton Hall, Indiana and Memphis, along with some exciting offensive basketball teams like Siena and Nebraska Omaha.  On top of that, playing in the premier conference in college basketball will also be exciting for our fans.”

Including a pair of exhibition games against intrastate teams, 10 of the Cardinals’ first 11 games will be played at home in the KFC Yum! Center, UofL’s spectacular 22,000-seat home arena.  The Cardinals will face their first outside competition in an exhibition game on Oct. 30 in the KFC Yum! Center against Kentucky Wesleyan, followed by Bellarmine on Nov. 7.  Both were NCAA Division II Tournament participants last season.  UofL officially opens its season with four straight home games on Nov. 12 against George Mason, Nov. 17 vs. Nebraska Omaha, Nov. 21 vs. Southern Illinois and Nov. 24 vs. St. Francis.

The Cardinals play their first road game of the year at Purdue in the Big Ten-ACC Challenge on Nov. 28 at 8 p.m. on ESPN.  The Cardinals return home to face preseason top 20 foe Seton Hall on Dec. 3 in the 16th Annual Billy Minardi Classic, an event named in memory of Pitino’s brother-in-law who died in the Sept. 11, 2001 terrorist attacks on the World Trade Center.   Former UofL assistant coach Kevin Willard is in his eighth year as head coach of Seton Hall.

Louisville plays its first of four games in the Gotham Classic against Siena on Dec. 6 in the KFC Yum! Center.  The Cardinals will also play home games against Bryant (Dec. 11, ESPNU) and Albany (Dec. 20, ESPNU) in the event, with a Dec. 16 game against Memphis in Madison Square Garden as the featured game in the Gotham Classic (ESPN2).

UofL will face Indiana on Dec. 9 in the KFC Yum! Center, as well as Grand Canyon on Dec. 23 in the final home non-conference game.  Louisville will close out 2017 and play its final non-conference game at Kentucky on Dec. 29 in a CBS-televised game.

Louisville’s ACC schedule will include a demanding slate of 18 games, including two games each against Florida State, Pittsburgh, Virginia and Virginia Tech – three of which were NCAA Tournament participants last season.  A Jan. 2 home matchup with Pittsburgh leads off the Cardinals’ ACC schedule.

The ACC Tournament will be staged at the Barclays Center in Brooklyn, N.Y., on March 6-10.

Louisville has received attention among many early top 25 rankings.  Last season, the Cardinals posted a 25-9 record, tied for second in the ACC and earned a No. 10 ranking in the final Associated Press poll.  UofL is one of just four teams that have won 20 or more games in each of the last 15 seasons.  The Cardinals have received an Academic Performance Rate Public Recognition Award each of the last five years, including posting a perfect score the last four years.

The complete 2017-18 UofL men’s basketball schedule is available online at this link:  http://gocards.com/schedule.aspx?path=mbball&