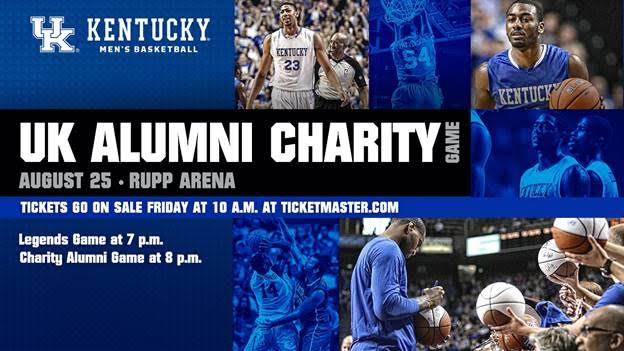 Tickets will go on sale starting Friday at 10 a.m.; this year’s event will feature two games
LEXINGTON, Ky. – Some of Big Blue Nation’s favorites will don “Kentucky” across their chest once again for the annual UK Alumni Charity Game.

On Aug. 25 in Rupp Arena, fans will have an opportunity to enjoy some of the top talent to come through the UK men’s basketball program when Kentucky hosts the 2017 UK Alumni Charity Game. This year’s event will feature two games, with a Legends Game starting at 7 p.m. and the UK Alumni Charity Game tipping off at 8 p.m.

The Legends Game will feature legends from the past, while the annual UK Alumni Charity Game will pit current UK pros against one another. Per NBA rules, the University of Kentucky cannot confirm any current NBA players participating in the exhibition game. The Legends Game currently includes Kentucky greats and former NBA players Derek Anderson, Keith Bogans, Rex Chapman, Joe Crawford, Tony Delk, Kevin Grevey, Kyle Macy and Kenny Walker, among others.

Tickets for the 2017 UK Alumni Charity Game will go on sale to the public on Friday at 10 a.m. All seats are reserved and priced at the following rates: