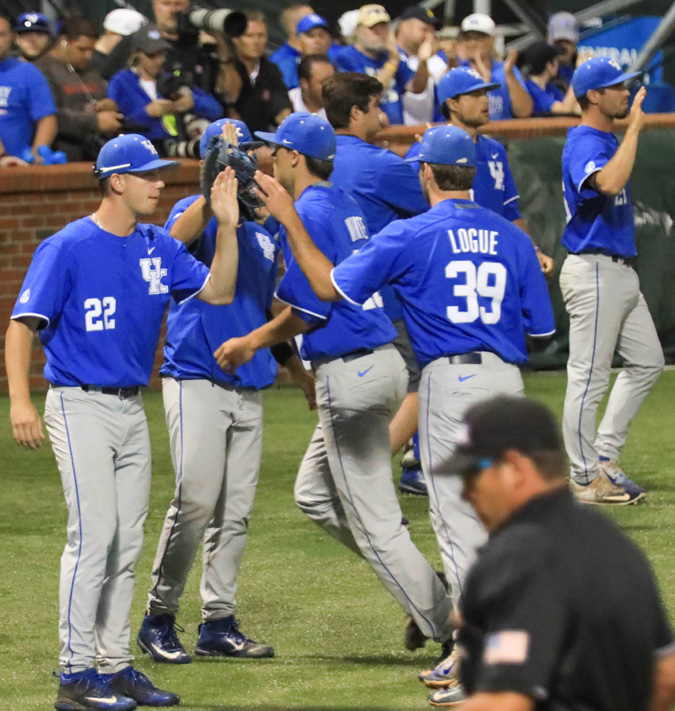 The new Southeastern Conference slogan, “It just means more,” certainly applies to its baseball teams. Unbeknownst to many Big Blue basketball die-hards, America’s pastime has always surpassed hoops in both attendance and interest throughout the other 13 SEC campuses. Although the pigskin still reigns supreme on Saturdays down south, bleached cowhide consistently surpasses dimpled leather every other day of the week.

In my first year on the baseball beat, I learned first-hand how every SEC school (outside of Kentucky) prioritizes baseball success over basketball dominance. It just means more, especially for SEC teams out on the baseball diamond.

Nowhere is this more evident than the NCAA Baseball Tournament where six SEC teams made it through the Regional round into the Super Regionals. LSU, Florida, Vanderbilt, Texas A&M, Mississippi State…and yes, Kentucky now find themselves only two wins away from the College World Series in Omaha. The Wildcats, by virtue of victories over Ohio, Indiana, and a memorable rain-delayed contest against North Carolina State that lasted into the wee hours of Tuesday morning, now face a 70-minute bus ride down I-64 to square off against their in-state rivals.

Hosting only its second Regional ever, Cliff Hagan Stadium received a bit of a makeover this week with some additional bleacher seating and flashy NCAA signage. Kentucky’s offense needed no makeover, however, as Wildcat bats pummeled the opposition for a combined total of 42 runs and 59 hits over a five-game span as record setting crowds looked on. Riley Mahan’s 6th inning grand slam homerun over IU in Sunday’s critical elimination game highlighted the onslaught as Kentucky rallied from the bottom half of the regional bracket to defeat North Carolina State in back-to-back games.

There’s no doubt in my mind that the Wildcat’s path to Omaha was crafted and paved by the brutal competition of the SEC. Every UK player I’ve spoken to this year has mentioned playing in arguably the premiere conference in the nation as one of the top reasons for them ultimately donning the blue and white. “It just means more to play in a conference where day in and day out you’re going to play someone you’ll see in the Big Leagues,” said senior ace reliever Logan Salow. “You’re going to play a team that you’re probably going to see on TV in a College World Series, and you might even be that team.”

The Wildcats are still in the hunt for being that team this year. With 19 conference wins, the SEC coach of the Year in Nick Mingione, and the SEC Pitcher of the Year in Sean Hjelle, they’ve certainly earned their stripes. Despite a disappointing series loss to Florida costing them the regular season championship and a bit of a flame out to South Carolina in the elimination game of the SEC tournament, Coach Mingione remains focused as always on the road ahead.

After advancing to a Super Regional for the first time ever in school history, Coach Mingione will be glad to know the Wildcats (43-21) will be going to Louisville (50-10) this week for the baseball version of Bluegrass Armageddon. Rather than Sacha Killeya-Jones versus Anas Mahmoud, Stephen Johnson versus Lamar Jackson, or Evan White versus…Well I can’t name any Louisville baseball players yet, but I’m sure Coach Mingione will have the talented Cards well scouted for the high stakes rubber encounter of the yearly rivalry series.

Make no mistake about it, the Cardinals are good, and they’ll be playing on their home turf. But they don’t have one thing the Cats possess—they don’t play in the SEC where night in and night out, you’re facing the best programs on the collegiate baseball landscape. You don’t lead the conference in nine offensive categories during the regular season without emerging with a high level of confidence and savvy. That valuable experience will be what finally propels Kentucky to their first College World Series ever. My prediction is that Nick Mingione will get his just desserts as Omaha prepares for an upcoming Big Blue mist invasion. Great coaching, skilled players, and the SEC–it just means more!