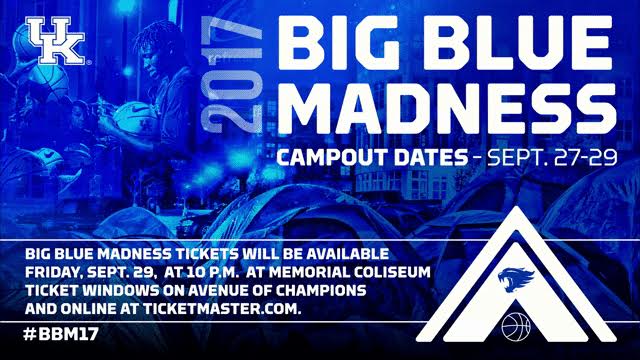 Fans can obtain tickets at Memorial Coliseum ticket windows or online at Ticketmaster.com

LEXINGTON, Ky. – Tickets for the 2017 edition of Big Blue Madness in Rupp Arena will be available Friday, Sept. 29, at 10 p.m. at the Memorial Coliseum ticket windows on Avenue of Champions and online at Ticketmaster.com. Big Blue Madness, the first open practice opportunity for UK’s 2017-18 men’s and women’s basketball teams, is Oct. 13 at 7 p.m. It will also air live on the SEC Network.

Tickets are free again this year for the annual spectacle in Rupp Arena, which will feature introductions of both the men’s and women’s basketball teams, practice drills, videos, and more. Like the last two years, the ticket distribution will take place Friday night both at the Memorial Coliseum ticket windows on Avenue of Champions and online at Ticketmaster.com. All patrons require a ticket to Big Blue Madness, regardless of age. There will be a limit of two tickets per person at the Memorial Coliseum ticket distribution. Online orders will have a minimal service fee attached, and there will be a limit of two tickets per household. All duplicate orders will automatically be canceled. UK Athletics cannot guarantee fans will receive tickets by lining up or going online.

To support regular campus operations and facilitate student pedestrian routes to and from class – which have been affected due to surrounding campus construction – campout space will be limited to the north, east and southeast areas around the Joe Craft Center-Memorial Coliseum complex.

At the request of campus public safety officials, fans wishing to line up ahead of time at Memorial Coliseum for ticket distribution are asked to do so no earlier than 5 a.m. on Wednesday, Sept. 27. Advanced setups and pre-staging will not be permitted. At that time, campers are expected to be courteous to their fellow Wildcat fans and use caution when crossing Avenue of Champions and Rose Street over to the Memorial Coliseum and Joe Craft Center blocks to occupy a spot in line. Public safety officials will be on site to facilitate a safe move-in. Campers displaying unsafe/disorderly conduct risk being removed from the line.

To support regular campus operations and facilitate student pedestrian routes to and from class, this year’s camping area will be limited to the following areas:

A map of this year’s available camping sites is attached.

Campers are expected to be respectful to fellow campers, students, faculty, staff, security officials and pedestrians (by keeping sidewalks and passageways clear) during the campout, and to abide by all university policies. The university will be operating normally with classes in session.

UK Athletics cannot guarantee a spot for those wishing to line up ahead of time on Wednesday at 5 a.m. Once available space for fans has reached capacity, remaining fans will be directed to acquire tickets at Ticketmaster.com. As in past years, UK Athletics will inform fans when available space has reached capacity and they are unlikely to receive control cards for the in-person ticket distribution.

The athletics department will provide portable restroom facilities, but the use of permanent, wooden-type structures, portable generators, and propane tanks or other open flames used in cooking is prohibited due to safety concerns. Campers may not drive or drill stakes in the pavement to secure tents in the parking lot areas. Alcoholic beverages and tobacco products are not permitted. Additionally, selling sports tickets in excess of face value is illegal in Kentucky.

Fans camping out for the Big Blue Madness ticket distribution may utilize the Wildcat Plaza area located directly across Avenue of Champions from Memorial Coliseum for a maximum of five minutes to drop off campers or unload their vehicles. Campers may also pay to use any metered spaces on city streets near the Craft Center-Memorial Coliseum complex.

The Coliseum Lot will be monitored by UK Transportation Services. Only UK employee-permitted vehicles will be allowed entry unless guests are using the metered spaces to use the UK ticket office or bookstore.

Campus safety officials request that campers not block bike lanes and/or sidewalks with their vehicles at any time. Vehicles left unattended or creating a traffic hazard will be cited and/or towed.

After unloading, campers must relocate their vehicles to off-campus locations.  Public parking options near campus include the Transit Center Garage and the Lexington Center Corporation, both of which have entrances accessible via High Street.  Both parking lots are within walking distance of Memorial Coliseum and provide daily parking for a small fee.  Please visit lextran.com/routes for information regarding Lextran bus routes to campus.

Beginning at 2 p.m. on Friday, Sept. 29, the gates of the South Limestone Garage (PS #5, located next to Kennedy’s Wildcat Den) will be open and the structure will be available for free parking. The garage will remain open until 1 a.m. on Saturday.

The UK Sports Network will once again produce live video stream coverage of the Big Blue Madness Campout with the airing of “Tent City Live.” Broadcasting from the Coca-Cola Stage, now located outside the Joe Craft Center and Wildcat Coal Lodge, the live stream will air Thursday, Sept. 28 from 8-9:30 p.m. ET on UKathletics.com/tentcitylive and live on the Kentucky men’s basketball Facebook page. Fans can also tune in to 630 WLAP-AM to listen to the radio broadcast of the show.

Rex Chapman and Dave Baker return as hosts for the show and special guests will join throughout the evening, including former UK men’s basketball players Kenny Walker and Heshimu Evans, for a night of interviews and roundtable discussions previewing the upcoming season. Members of the UK women’s basketball team also will visit the set to preview their season. Fans are encouraged to submit questions and comments for the hosts and guests to the UK Sports Network via Twitter at @UKRadioNetwork to be answered on the live stream.

In addition to “Tent City Live”, the Coca-Cola Stage will also be the setting for interactive sponsor promotions and fan events, including a live performance on Thursday from the acoUstiKats and Paws and Listen, the University of Kentucky’s respective male and female student a cappella groups. Coke will also have an inflatable football toss, cornhole, product sampling and free prize giveaways. Additionally, Sleep Outfitters will provide a ‘Cat Nap Corner,’ which will be open to all campers during the campout. This area will feature UK Champions Collection Tempur-Pedic mattresses for relaxing, phone-charging stations, snacks and contests, including a Grand Prize VIP Experience at Big Blue Madness.

Paul Miller Ford will provide prizing and a fun-filled photo booth with a basketball-themed background for fans to share pictures of the campout. Kentucky Legend will once again be on-site with a Fischer’s hot dog grilling station to help feed fans, along with the Kentucky Strong BBQ food truck courtesy of Paul Miller Ford. Also, one of the most popular events to close out the evening will be the Papa John’s pizza handout to fans.