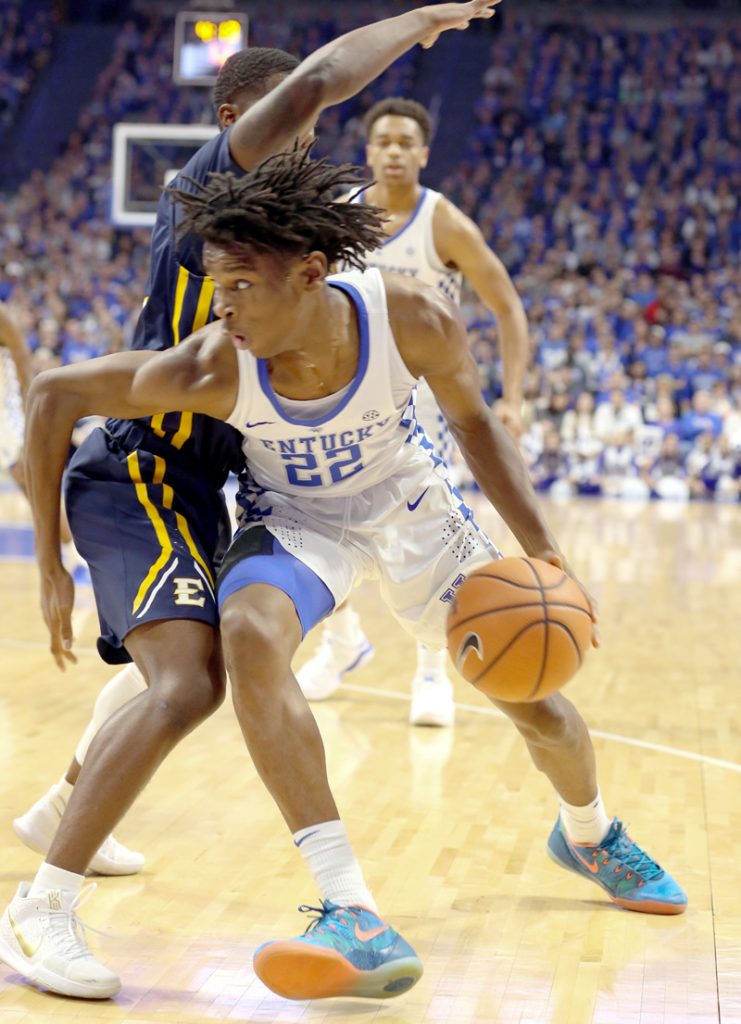 By Ricky Blair
Lexington, KY – If you thought any game this season was going be easy for this young Kentucky basketball team, you were seriously mistaken.  Kentucky threw the ball away on their first possession of the game and ETSU scored a 3-pointer on the other end.  That was the start of a long first half for the Wildcats.  The Buccaneers went up by as many as 10 points when Devontavius Payne made a 3-pointer for ETSU to give them an 18-8 lead.

A fast break layup by freshman guard Hamidou Diallo gave UK its first lead with 5:29 to go in the first half at 26-25, but the Cats were still not out of hot water as ETSU regained the lead two minutes later.  Kentucky steadied itself and finished the half on a seven point run to take a 36-30 lead to the locker room at the halftime.  UK freshman Quade Green started the game on fire as he made his first five shots including two 3-pointers to finish the half with 12 points.  PJ Washington also had a good half, chipping in 6 points, 4 rebounds and 3 assists.

The second half started better for the Wildcats as they scored the first nine points to extend their run to 16 points.  ETSU finally snapped their almost eight minute drought when Desonta Bradford made a pair of free throws to cut the lead to 13 at 45-32.  That was as close as the Buccaneers would get as Kentucky would extend the lead out to as many as 22 points before settling for a 78-61 win.  The victory improves the Wildcats record to 3-1 on the season.  Kentucky was led in scoring by Green who finished the game with 21 points, Kevin Knox was close behind with 17 as he made four of his seven 3-point attempts; he also led the team in rebounding with 10, all of which were on the defensive end.  Freshman forward PJ Washington had an up and down game, on the positive side he had 12 points, 8 rebounds and 4 assists, but on the negative side he had a team high 6 turnovers and he fouled out before the end of the game.  Washington is definitely a work in progress, he has a lot of potential, but it will just take him a little time to adjust to the speed of the game at the college level and cut down on the turnovers.  Shai Gilgeous-Alexander had a solid game with 10 points and a team high 6 assists.  Sacha Killeya-Jones had another good game with 8 rebounds, six of which were offensive rebounds, he also led the team with three of the team’s eight blocked shots.

The Wildcats won despite having one of the worst free-throw shooting games of all-time.  The Cats were a horrible 3 of 15 from the foul line for 20 percent.

Kentucky’s next game will be at Rupp Arena on Monday when they take on the Troy Trojans at 8 p. m.  The game will be on the SEC Network.