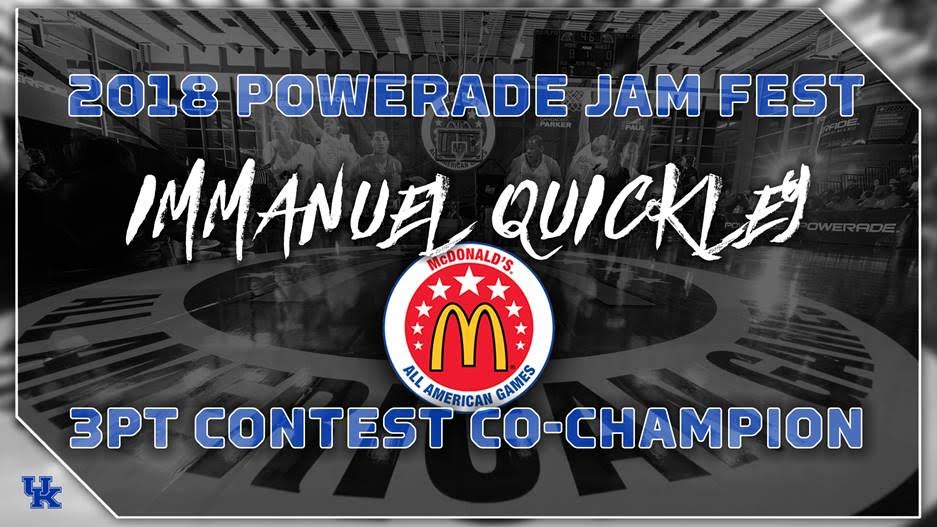 The future Wildcat, who is participating in this week’s McDonald’s All American Game, tied for first place in the Powerade Jam Fest 3-Point Contest on Monday in Atlanta. Quickley tied Duke signee Cameron Reddish with a score of 17.

The UK duo mark the 31st and 32nd players in the John Calipari era to earn selection in the event, more than any other high school in the country during that time period. Multiple players from each signing class have been tabbed McDonald’s All Americans during the Calipari era, including five in the 2013 and 2017 classes.

Johnson also participated in Monday’s Powerade Jam Fest. He was featured in the Slam Dunk Contest and threw down one of the best dunks of the night in the second round – a 360-degree windmill – but a failed first attempt prevented him from moving on to the finals.

Johnson also participated in the Legends and Stars Shootout. Former UK standout and 1996 national champion Tony Delk was on hand as one of the legends.

Quickley, a 6-foot-4 guard out of the John Carroll School in Bel Air, Maryland, is a consensus five-star prospect. Considered a consensus top-three player at his position, he’s ranked as high as No. 15 by 247Sports and No. 17 by ESPN. Quickley has battled some injuries during his senior season but led his school to a conference championship while averaging 20 points, six rebounds and six assists per game.

Quickley scored 30 or more in five games, 20 or more in 14 games and finished with eight double-doubles in his junior season. He also averaged 25.7 points, 4.7 rebounds and shot 42.1 percent from 3-point range in the Adidas Summer Championships in July. He was a member of the 2017 USA Men’s U19 World Cup Team that competed in Cairo. Playing under Calipari, Quickley averaged 6.7 points and 2.4 assists in 18.3 minutes per game. He was named the Baltimore Sun Metro Player of the Year in 2016.

A 6-6 shooting guard out of Oak Hill Academy in Mouth of Wilson, Virginia, Johnson is a consensus five-star player and one of the best in the class of 2018. A native of South Hill, Virginia, he previously played for Huntington Prep in Huntington, West Virginia, before transferring to Oak Hill for the 2017-18 season. Johnson is ranked as high as the No. 6 overall prospect by ESPN. 247Sports ranks him as the nation’s No. 13 overall player while Rivals has him at No. 14.

Johnson led his Boo Williams (Va.) AAU team to the semifinals of the Peach Jam after averaging 20.7 points, 8.5 rebounds and 3.1 assists during the Nike regular season. Johnson took home MVP honors at the NBPA Top 100 Camp in June. Johnson averaged 22.1 points, 6.8 rebounds and 4.4 assists for powerhouse Oak Hill this season and was one of 54 players selected for the USA Basketball Junior National Team minicamp in October. He was tabbed to the Naismith Trophy High School All-America Second Team earlier in the month.

Joining Quickley and Johnson in the 2018 signing class is Tyler Herro. Although he didn’t make the McDonald’s All American Game, he enjoyed one of the best seasons in the country among all high school players nationally. Herro, out of Whitnall High School in Greenfield, Wisconsin, averaged 32.9 points, 7.4 rebounds, 3.6 assists and 3.3 steals per game this past season.

A 6-5 shooting guard, Herro connected on better than 50 percent from the floor and 43.5 percent from behind the arc. He scored 40 or more points in eight games this season. The top-ranked player out of Wisconsin, Herro is tabbed No. 25 overall by ESPN, No. 32 by 247 Sports and No. 35 by Rivals. Like Johnson, he was one of 54 players selected for the USA Basketball Junior National Team minicamp in October.

Johnson and Herro will both play in the Jordan Brand Classic on April 8 in the Baclays Center in Brooklyn, New York. They will then play in the Nike Hoop Summit on April 13.

In every season in the Calipari era, the Wildcats have signed a top-three recruiting class according to the Recruiting Services Consensus Index, which tallies major recruiting rankings and plugs them into a formula to calculate a consensus ranking.