UK Basketball – THE PREMIERE PRACTICE IN ALL OF COLLEGE BASKETBALL. 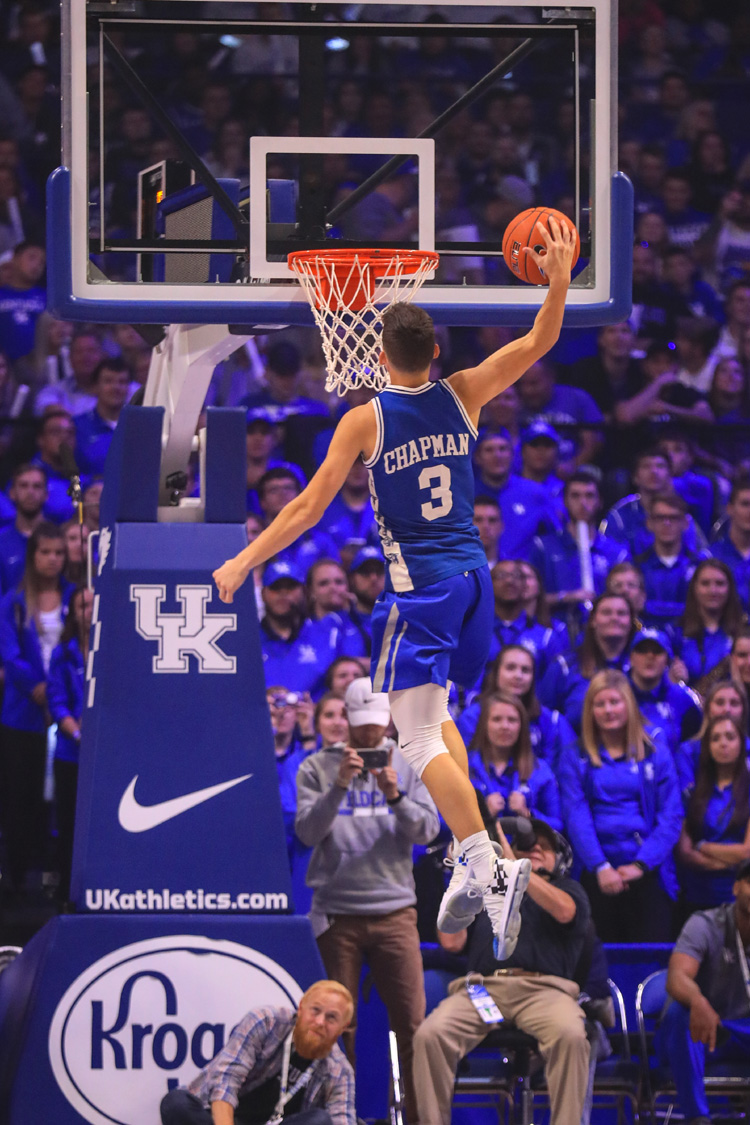 The day has finally arrived, the day that is celebrated as a national holiday to the Big Blue Nation, the Event that thousands of spectators camp out for nearly a week to get tickets for the most hyped Practice in all of sports.  The Event is Big Blue Madness 2018, the official launch for College Basketball’s most celebrated team, The Kentucky Wildcats Men’s Basketball team.  This year’s Kentucky team comes into the season with a great deal of hype and expectations are through the roof on what this year’s team can do.  Big Blue Nation was treated to the Big Blue Bahamas tour in August of this year, giving fans a preview of the team with scrimmages among pro teams throughout the world.  Kentucky Basketball didn’t disappoint as the team had four dominating wins, and each game featured a different athlete stepping up.  The Big Blue Bahamas tour was a success, UK fans filled the Atlantis Resort, but tickets were far too expensive to the common basketball fan.  Tonight, the team is home at Rupp Arena with 24,000 die hard Kentucky fans ready to explode as player introductions ensue.

The 3rd annual Blue Carpet entrance continued tonight as former players, and both the women’s and men’s team walked the blue carpet onto the front entrance of Rupp Arena.  The Blue carpet feels like a celebrated movie premiere as the players are treated like celebrities, some even posed for pictures and performed interviews with various media organizations.  The Big Blue Carpet is part of what separates UK’s madness from other programs.  Fans in the commonwealth of Kentucky have a general love for the basketball team, and many UK fans have been life- long fans being born and grew up loving the Wildcats.    Several Hundred fans attended the event and Bluegrass Sports Nation was on media row, giving our followers the videos of the players entering the arena.  Michael Willis, Mike Cyrus and I David Leveridge, all attended the event, if you missed any of the coverage please check our Facebook site to see videos and pictures of the event.

Recruiting future Wildcats is an essential part of Big Blue Madness.  Sure, Kentucky fans look forward to the event every year, and is an exciting time in the Bluegrass, but putting on a world class show to some of the nation’s highest rated recruits is essential to the programs future success.  Among the recruits at tonight’s event were current UK commits class of 2019 Tyreese Maxey and Dontaie Allen.   Maxey and Allen are both experiencing the madness for the first times as recruits.  Maxey is one of the top-rated point guard in the class of 2018 and is expected to be the future floor general (point guard) of next years team.  Allen has had an impressive summer and being from the state of Kentucky is the first scholarship player to commit to the CATS since Derrick Willis and Dominique both did so in the class of 2013. Among other recruits were 2018 Five Star Center Vernon Carey Jr.  Carey is considered a top 3 prospect and one of the most skilled big men in recent years, Carey and James Wiseman are two recruits at the top of John Calipari’s priority list.  Also attending Big Blue Madness 2018 are a four highly regarded prospects from nearby Huntington Prep high school, from Huntington, WV.  The players include five-star class of 2020 Jaemyn Bakersfield, 2020 four-star AJ Hoggard, 2021 five-star JT Thor, and 2021 four-star Joshua Primo.  S

UK Hoops Team- As in years past the UK women’s team are the first ones to be revealed to the public.  The players were the first to hit the Rupp Arena court.  Eastern Kentucky has 2 females currently rocking the KY blue.  Freshmen Blaire Green from Harlan County and Senior Maci Grimes from Bell County, both entered the arena to an insane amped up crowd.  Green entered to a popular Rap song while, Grimes stock to her country Roots wearing Camo Boots and walked out to “Where Form the Country.”  A popular Tracy Byrd Song.  Grimes is the leader of the hoops team and will be looked on to carry the scoring load this season for the Hoops team.  Grimes also received the loudest ovation from the crowd.

With the players being introduced it was time for the always entertaining Coach Mathew Mitchell to enter the arena.  Coach Mitchell’s dances are always entertaining and is typical a highlight of the event.  Coach Mitchel stuck to hip hop wearing a backwards flat bill UK hat.   Mitchell procced to move onto the court and danced with several UK cheerleaders near center court.

The women played two five-minute quarters.  The women competed hard and gave the players an opportunity to play in Rupp Arena, something that rarely happens as the team plays most of their games in Memorial Coliseum.  Blair Green and Maci Grimes each scored several baskets in transition.  Grimes star shined the brightest as she leads the hoops team in scoring.  The UK Blue team led by Maci Grimes defeats the White team 16-8.

2018 Men’s Basketball teams- The Moment the crowd has waited for and the main attraction of the evening has finally arrived, the debut of the UK men’s Basketball team.  UK turned all the lights out in the coliseum, with the only thing being visible is the glow sticks UK gave Rupp Arena Patrons entering the arena.  The Hype video begins with the floor being projected as a full court tv screen.  The crowd impatiently watches as the hype video begins.    Players enter the arena some for the first time ever, and the feeling must be overwhelming to 18-year-old Freshmen stepping foot in College Basketball’s most historic arena.  Each player comes out dancing, but the players whose dance moves impressed the crowd the most was Immanuel Quickly, PJ Washington, Keldon Johnson, and senior Johnny David.  Johnny David instead of entering to the popular Hip- HOP songs, entered to a slower song, and danced the Carlton Dance that was popular on the Fresh Prince of Bell- Air 90’s sitcom.

With the player introductions over Coach Calipari entered the Arena and delivered his yearly speech at Big Blue Madness.  Coach Calipari is coming into his 10th season as the head coach of the most Historic Basketball program in the Country.  Coach Calipari really embraces the challenges and success of being at the helms of the Wildcats.  During Coach Cal’s speech he talked about how the Big Blue Nation isn’t for everybody and how each player must be willing to sacrifice for the betterment of the team.  Cal also stated that he has had guys be drafted in the first round and not even start for the University of Kentucky.  Calipari is the master motivator and each player that commits to play for him come out being better players and people.  At the end of Calipari’s speech, he brought out members from the first three National Championship teams 1948, 1949, and 1951, each had members walk onto the floor for a standing ovation.  Relive the moments from the speech along with other high lights of the night on our social media site Facebook Bluegrass Sports Nation.

The Wildcats had two events that were new to Big Blue Madness 2018, the events were the 3pt contest and dunk contest.  The Three- point contest featured eight players with each two players shooting for 30 seconds at each end of the floor.  The three- point contest come down to a finals battle between Two freshmen Tyler Herro and Immanuel Quickly.  Herro had 21 made shots in the preliminary round, Quickly had 20 made shots in the preliminary round.  In the finals of the three- point contest suspense builds as both players were heading into the last rack of balls with identical scores of 18.  Quickly trailing by one knocks down his last shot the money ball, and defeats Herro with the score Quickly 22- Herro 21.

In the dunk contest 3 players each had 3 dunks with twitter determining the ultimate winner.  The participants competing in the event were a pair of Freshmen in Tyler Herro, and Keldon Johnson along with the Sophomore with a mean Snarl P. J Washington.  Herro looked nervous and unsure in the dunk contest who only completed two of the three dunks.  The battle for dunk champion was played between Johnson and Washington.  Each player provided spectacular dunks that electrified the crowd.  One dunk that stood out is Johnson jumping over teammate Quade Green.  The crowd was insane on this dunk, as a loud CATS chant filled the arena.  Washington topped the dunk by jumping over 2 Basketball managers.  Washington’s dunk brought the decibel rating of Rupp Arena up a few notches, as spectators were amazed by his jumping ability.  Both players completed spectacular dunks to finish the dunk contest, but in the end, Washington was chose as the Dunk Champion.

Scrimmage- The teams were divided into a Blue and a white team.  Starting for the Blue team were Quade Green, P.J. Washington, Keldon Johnson, Immanuel Quickly, and Nick Richards.  The White Team starters were Tyler Herro, Reid Travis, Ashton Hagans, E.J. Montgomery and Jemarl Baker.  Watching the scrimmage, it was apparent that no defense was going to be played and the game would consist of uncontested dunks and sloppy play.  P.J. Washington the Sophomore edition looks like a completely different player.  Washington is now lean in a lot better shape and tonight looked like an elite College Forward.  Keldon Johnson is going be a highlight maker, who I anticipate will regularly be appearing on ESPN’s Sports Center amazed the crowd with high flying transition dunks.  With 1:08 remaining in the scrimmage Coach Calipari had enough of the lazy non-existent defense.  Calipari stops the game with the Blue Team leading 37-21 over the White team.

Big Blue Madness was a fun event to attend, but the lack of traditional basketball play provided some boring basketball.  The Highlights of the night were the player introductions, the projection of the court, and realizing that basketball season is now here as this was the first official practice of the season.  Kentucky is going be a fun team to watch and cover, as the Quest for Championship # 9 begins now.  Please check out Bluegrass Sports Nation for your coverage of the 2018 Kentucky Wildcats.  Like, Follow, share the page, which can be found under our web address at www.bluegrasssportsnation.com or via our Facebook page Bluegrass Sports Nation.