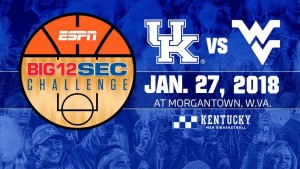 UK will play at WVirg. this season

UK will make its third all-time trip next season to Morgantown, West Virginia

BIRMINGHAM, Ala. – Always one of the main events of the college basketball season, the Kentucky men’s basketball team’s draw in the annual Big 12/SEC Challenge will once again be an enticing one as the Wildcats will travel to West Virginia on Jan. 27.

It will mark the Wildcats’ third all-time trip to Morgantown, West Virginia, to play the Mountaineers and the first since defeating WVU 106-100 on Dec. 7, 1970. UK is 1-1 in games at West Virginia, but the Wildcats own the all-time head-to-head edge 15-5, including a 9-1 record over the last 10 games.

The last three meetings between the two schools have all taken place in the NCAA Tournament. The last game was in 2015, when UK rolled past the Mountaineers 78-39 and into the Elite Eight in Cleveland.

The 2018 slate of Big 12/SEC Challenge games will mark the fifth season of the annual event between the Southeastern Conference and the Big 12 and the third straight season where all 10 games of the challenge will be played on the same day. A bye in the league schedule for participating teams was created to accommodate for the format.

Four of the 10 games will be televised on ESPN, four on ESPN2 and two games will air on ESPNU. All

10 games will also be available on the ESPN app. ESPN’s College GameDay Covered by State Farm –

originate from one of the Challenge games.

Game times and network designations will be announced at a later date.

West Virginia, an annual powerhouse in the Big 12 and in the national polls, was among the top teams in college basketball during the 2016-17 season. The Mountaineers finished second in the Big 12, spent the entire season in the top 25, and advanced to the Sweet 16 before losing to Gonzaga, the national runner-up, in a heartbreaker.

The core of that WVU team is expected to return for the 2017-18 meeting, including the top two leading scorers in Jevon Carter and Esa Ahmad. West Virginia is widely considered a top-25 team heading into next season based on early national rankings.