UK Battles Hard But Loses A Hard-Fought Game To Tennessee 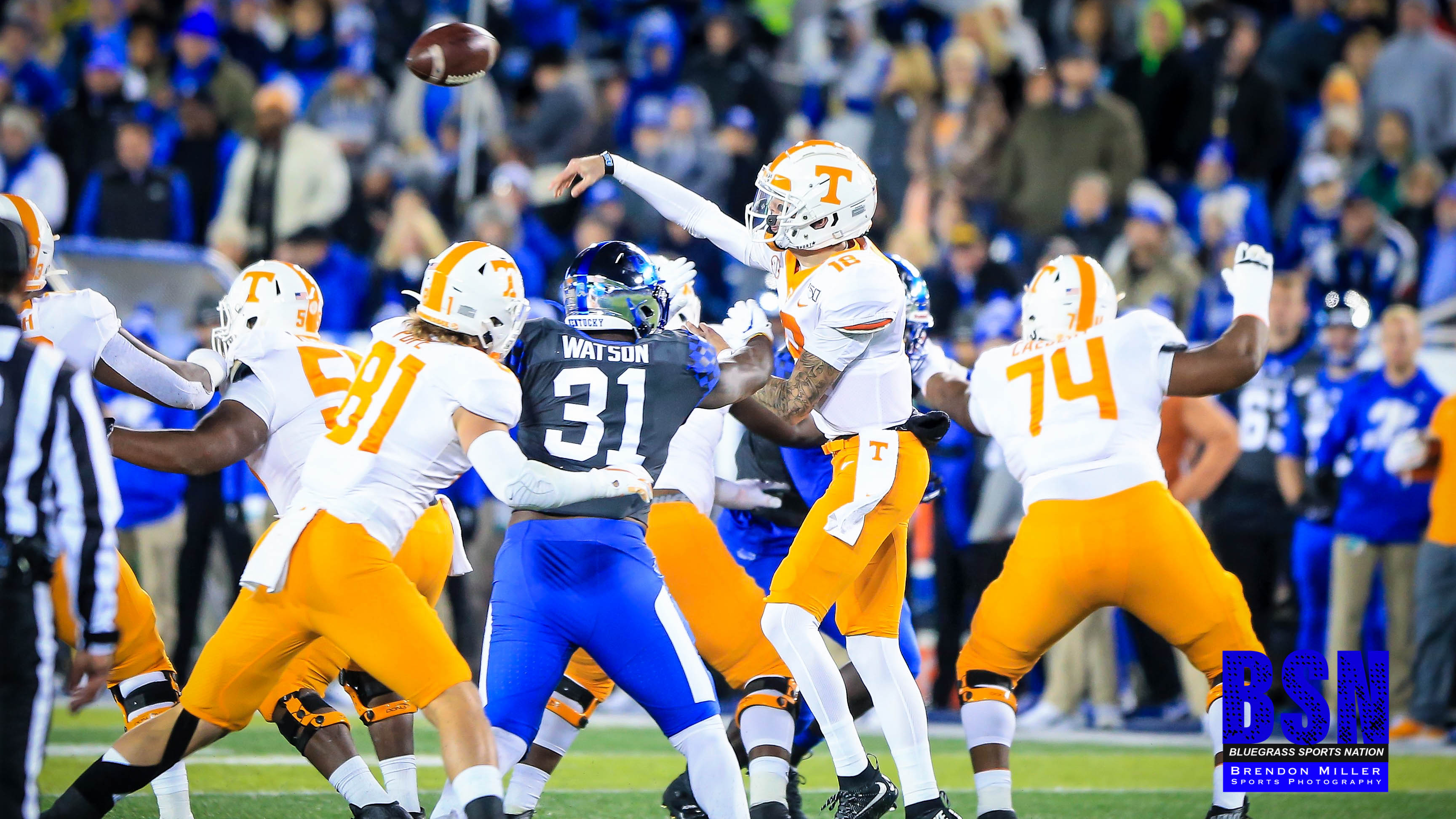 In the 115th edition of this rivalry, Tennessee picks up their 81st victory over the Cats 17-13.

On Saturday night, the Kentucky Wildcats hosted the Tennessee Volunteers at Kroger Field. Kentucky entered the game with a 4-4 record while Tennessee’s record was 4-5; which made the game that much more important for both teams as a win would greatly help their chances to become bowl-eligible.

First Half:
Kentucky got the ball to start the game, marching down the field on a 17-play, 75-yard touchdown drive which lasted over 10 minutes. On the ensuing possession, Kentucky’s Josh Paschal blocked Tennessee’s punt. The Cats took over at the Tennessee 24-yard line. It took just two plays for Kentucky to put the ball into the end zone as Kavosiey Smoke did the honors with a 22-yard touchdown run. The extra point was blocked, giving Kentucky a 13-0 lead with 2:28 to go in the first half. At halftime, the score was 13-3 in favor of the Cats.

Second Half:
Tennessee made a change at quarterback as Jarrett Guarantano replaced Brian Maurer. However, Guarantano has played the vast majority of the reps for Tennessee on the season, so he isn’t exactly a traditional backup quarterback. Guarantano provided Tennessee with a much-needed spark; as the Vols scored a touchdown on Guarantano’s first two possessions at the helm of the offense.

After an unforced turnover by Tennessee with just under eight minutes remaining in the game, the Cats marched down the field but were stopped just shy of the goal line with 1:17 to go in the game. The Vols were able to pick up a first down, essentially ending the game.

Kentucky had possession of the ball for nearly 42 minutes of the game.

Jarrett Guarantano went 7 of 8 for 115 yards and two touchdowns through the air while also leading the Volunteers in rushing yards with 30 yards on six carries.

Kentucky’s missed extra point attempt, in the first quarter, proved to be very costly. If the Cats had made the extra point, they would have potentially been able to force overtime with a field goal on what ended up being their final drive of the game.

Kentucky’s Postseason Aspirations:
With the loss, UK falls to (4-5, 2-5 SEC). Kentucky closes out the regular season with a road game against Vanderbilt followed by home games against Tennessee Martin and Louisville. Kentucky will have to win two of their next three games to become bowl eligible, which is very doable. Upon entering Saturday, ESPN’s Football Power Index gave Kentucky nearly a 50% chance to win their last three regular season games. All things considered, Kentucky is still well-positioned for bowl-eligibility, despite dealing with a number of injuries at the quarterback position throughout the season.

What’s Next?
Kentucky’s next game is on Nov. 16, against Vanderbilt, in Nashville, Tennessee. The game is scheduled to start at 3:30 p.m. and will air on the SEC Network.