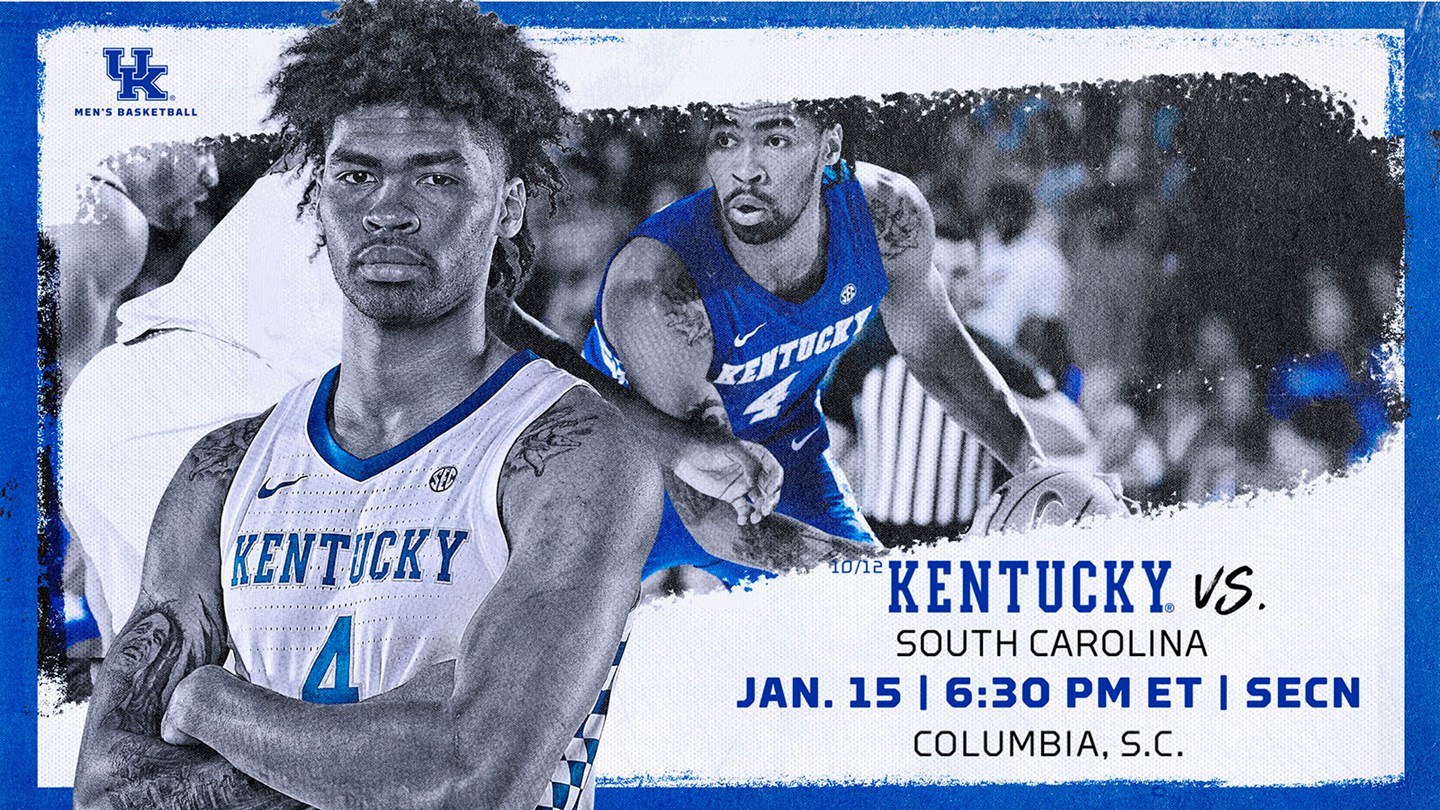 Nick Richards is playing better and more consistently than he has in his entire life.

At his side every step of the way the last three years has been Kenny Payne, the Kentucky associate head coach whose former pupils now dot NBA rosters.

It was natural, then, for Richards to want to take a moment celebrate how far he has come with his coach.

He said no at first at first, but Richards persisted and asked again. Payne finally relented.

Payne didn’t resist out of a lack of love for Richards. Quite the opposite in fact. It’s out of love that Payne, John Calipari and UK’s entire coaching staff refuse to let Richards be satisfied.

“We need Nick Richards to be great,” Payne said. “So, what happens is, most kids when success happens and he’s doing great, ‘I’ve arrived.’ No. We’re going not going to let you relax and think you’ve arrived. We’re going to—when you play good and we win, the next day at practice you’ve got a smile on your face, ‘Get your behind on that line.’ Like, we need you hungry every moment that you’re on the court. You will never relax. Not here.”

Richards is far from unique in being subject to that mandate. Just ask Ashton Hagans.

“I think Ashton is another example where everybody is talking about national defensive player of the year,” Payne said. “Well, from our standpoint, from Coach’s standpoint, it’s not close. He’s not as disciplined as he needs to be to be the best defender in the United States in college basketball. He’s not close. So, we’re on him about that. Like, you’re getting these accolades for doing something that we know, we work with you every day, there’s more.”

There’s more. That’s a statement that could be applied to every UK player and the team as a whole as the group wraps up Camp Cal. Really, it describes Calipari’s entire approach to his team entering a trip for No. 10/12 Kentucky (12-3, 3-0 Southeastern Conference) to face South Carolina (8-7, 0-2 SEC) at 6:30 p.m. on Wednesday. Mere days later, UK will go to Arkansas to take one of the SEC’s most improved teams.

“I’m loving my guys and believe in each and every one of them,” Calipari tweeted Tuesday afternoon. “Some are playing better than others. Some will take longer to get it. But I’m good because they want to be coached and they want to get better. Two tough road games ahead of us. The question we have to keep asking ourselves is, are we getting better? That thought process goes beyond all scores. We could win and step back and we could lose and step forward. For us, to be the team we want to be, it’s are we getting better.”

Another road game will be a good test of that, just as it was when UK overcame a halftime deficit to surge past Georgia in both teams’ league opener.

“You’re going into a gym that you’ve never played in unless you’re a veteran, but you only play in there once or twice,” Tyrese Maxey said. “But it’s difficult. For the freshmen, it was our first true road game so it’s our first time being in the gym with all opposing fans. Even on neutral sites, most of the gym is filled with Big Blue Nation. We went over there and it’s all red, so it’s just difficult. It’s hard to hear your coach when he’s talking to you and you just have to go out there and fight and be as one unit.”

Colonial Life Arena has been known to splinter teams before, including the last time UK played in Columbia, South Carolina. It was Richards’ freshman year when the Gamecocks closed on an 18-3 run to score a 76-68 upset.

“Frank Martin is a tough coach, a tough Miami coach,” Payne said. “His culture is physicality, toughness, rebounding, fighting, you’re not just going to walk into his arena and play basketball and it’s free flowing. He’s going to make the game hard. You’re going to get hit at times and you’ve gotta be ready for a fight. If you’re not, the aggressor wins.”

South Carolina might have absorbed some losses – including three straight since the Gamecocks took down defending champion Virginia on the road – but Payne says not to pay too much attention to all that.

“The records go out the window,” Payne said. “It’s not about how many games they’ve lost or won. It’s about, do you have a mindset going in there and not being hit and being on your heels. You may have to hit first and not let the physicality take you out of what you’re doing.”

Immanuel Quickley’s recent string of impressive shooting performances proves how well he’s used the semester break honing his perimeter shot in the gym. Those workouts prepared him for clutch moments that got No. 14/13 Kentucky past Alabama.

Quickley scored the game’s final five points and finished with 19, Ashton Hagans had 15 with a big 3 late and the Wildcats topped Alabama 76-67 on Saturday for their 1,000th Southeastern Conference regular-season victory.

Kentucky (12-3, 3-0 SEC) led by 15 early in the second half before a cold stretch allowed the Crimson Tide to climb within 63-60 with just over five minutes remaining. Quickley nailed a 3 from the right corner with 4:33 left before Hagans followed from near the top of the arc at 2:20 for a 69-62 edge that helped offset John Petty Jr.’s 3 that cut the deficit to four.

Quickley, who hit 5 of 6 from long range and 6 of 10 overall, came out of a timeout to make a 3 from the right corner with a minute left for a 74-67 lead. He added two free throws 24 seconds later as Kentucky beat the Crimson Tide for the 12th time in 13 meetings despite shooting just 32% after intermission.

“He saw that my man was kind of standing all the way under the basket,” said Quickley, who has averaged nearly 19 points over his previous three games. “So he said, when I throw it to Nick (Richards), Nick just flipped it right back and just let me play.

“The man went under, I read and took the shot and made it.”

“Steaming hot,” Quickley said when asked how hot he is right now. “If you touch me, you might burn. I have a lot of confidence right now. The ones I’m missing, I’m kind of shocked. My heart drops a little. ‘Dang, I didn’t make it.’ “

Richards had 13 points and 11 rebounds for his seventh double-double this season. Tyrese Maxey added 13 points for the Wildcats, who shot 44%. Hagans had nine assists.

Herbert Jones had 18 points and Petty 16 for the Crimson Tide (8-7, 1-2), which sought to follow up their 21-point rout of Mississippi State. Alabama entered the game as the SEC’s top scoring offense (84.4 points) and had scored at least 90 points in five consecutive contests. They entered the game averaging 11 made 3s per game.

The Tide didn’t come close to either statistic, though they made it interesting.

“They are hard to score on and they did as good a job defensively on us as anyone all year,” Alabama first-year coach Nate Oats said. “You tell your guys what it is going to be like trying to score at the rim on these guys, maybe take a few more 3s. But until you get into the game I don’t know how you emulate it. I guess, get some broomsticks out or something.”

• Kentucky is 3-0 in league play for the fifth time in 11 seasons under Calipari
• The Wildcats have won eight in a row at home vs. Alabama and 12 of their 13 overall games vs. the Crimson Tide
• Richards collected his seventh double-double of the season and eighth of his career with 13 points, 11 rebounds and five blocks
• Hagans flirted with a triple-double with a career-high nine rebounds and nine assists in addition to his 15 points and three steals
• With 13 points, Tyrese Maxey reached double figures for the fifth time in the last six games
• UK was plus-19 with EJ Montgomery (eight points, six rebounds) on the floor, a team best
• Kentucky held Alabama to a season-low-tying 67 points and 36.8% from the field. UK is 195-17 in the Calipari era when limiting the opponent to 40% or less
• Averaging 12 made 3-pointers coming into the game, the Wildcats held Alabama to 4 of 21 from outside, a season-low 19%
• Kentucky made 9 of 15 from 3, its best percentage (.600) of the season
• UK led by as many as 15 points. The Wildcats improved to 272-6 under Calipari when leading by at least 10 points at any time in the contest
• Hagans dished out at nine dimes and has 12 straight games with at least five assists. It’s the best run since Tyler Ulis turned the trick in 24 straight games from Dec. 26, 2015 to March 17, 2016

Kentucky owns more regular-season victories than any other program in the country. Earlier this season, the Wildcats won their 600th game in Rupp Arena. UK won its 600th game in just 670 tries to become the fastest to 600 in the country. On Jan. 11 against Alabama, Kentucky reached another milestone: win No. 1,000 in regular-season action in Southeastern Conference play.

Kentucky entered the season with a 997-281 mark all-time in league action and has won its first three of the 2019-20 slate. With no other SEC team owning more than 750 victories, UK reached the mark in record fashion among other programs within the SEC.

Determining whether UK is first in the country is up for interpretation. In the current structure of conferences, in which the Big 12 recognize alignment in its current format as beginning in 1996-97, Kansas would not recognize its victories until that season. However, if one combines all of Kansas’ wins in Big 6, Big 7, Big 8 and Big 12 play, Kansas has already topped 1,000 victories.

It is also important to note that Kentucky’s 1,000 wins are for SEC regular-season play only. It does not include victories as a member of the SEC, SEC playoff games, SEC Tournament wins or wins against SEC teams in the NCAA Tournament.