UK finishes up exhibition with a 156-63 win over Asbury 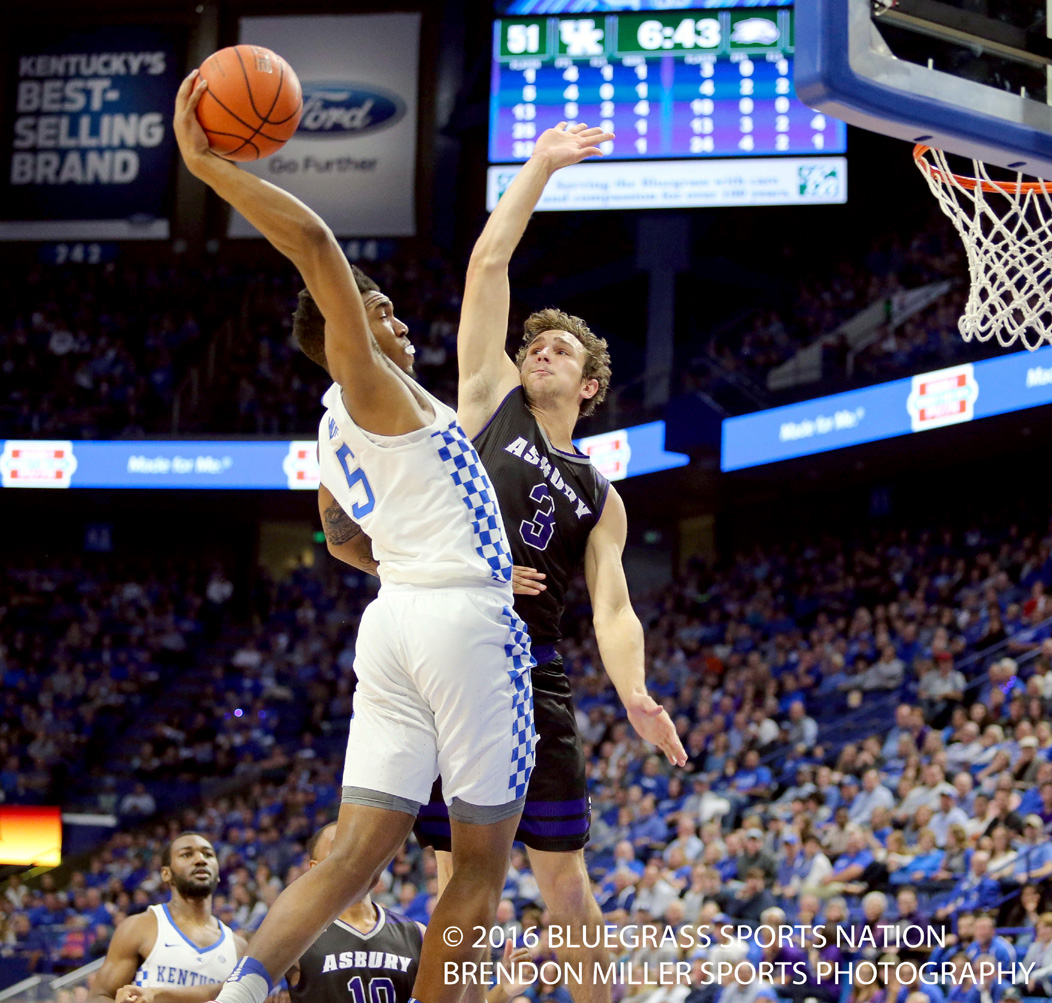 UK finished their exhibition portion of their schedule with a 93 point victory over Asbury. The Cats led at the half 88 – 25. The game was never in doubt as the Wildcats scored early and often and didn’t let up. The Cats lead did hit the century mark before Asbury put up some garbage points to end the contest. Fox led UK with 25 while Mulder tossed in 20 points. 8 players scored double figures and every Cat scored without any Wildcat playing 20 minutes in the game. Asbury took a ridiculous 49 (3) pointer attempts in an effort to score in bunches. Unfortunately for them, they only made 8 of 49 (3) point attempts.

Q. What did you want your team to get out of this kind of game and what did you think you did get?

JOHN CALIPARI: We wanted to guard threes, make them take tougher twos or really contested threes. And then the other thing is, I didn’t know if they would play the whole game the way they played. But it ended up, I told them you’re not going to be able to run offense because they will just run and trap you, so you’ve got to attack and that’s what led us to playing that fast. That doesn’t happen that often. We have had one team do that to us in my time here and that was Indiana in the (2012) NCAA Tournament and I think we won by 10 or 12 or 14 whatever it was. (Indiana) said we’re speeding them up the whole game, see if they can stay with us.

So this is like the second team that said just keep playing that way and I don’t blame Coach (Shouse) because this is how they play. They were 2-0. This is what they do. They shoot threes, they scramble the game up, they don’t let you run offense, they make you play basketball, and they believe they’re in better shape than the teams they’re playing. So he didn’t want to change for this game, and I don’t blame him. On the other side, that’s why we scored so many points.

Q. This was the second straight game where you had a lot of players in double figures, a lot of assists, is that more a function of game flow or does that reflect the unselfishness of this team?
JOHN CALIPARI: Well, every one of these guys could try to get 30 (points). You’ve got every one of them that have that kind of ability, and they know they have to do it together. The one thing we’re not doing right now is we’ve got to post the ball, and you saw later in the game I just forced them to throw the ball inside. You cannot play winning basketball unless you have a post presence.

How about Bam’s energy? Was that crazy? Like, his motor? Well, if he plays with that kind of motor, and he can do it for a long time in the game, you better play that way or I can’t take his minutes and give them to you, whoever you are. I mean, and then he’s going to play every minute he can play.

And so, okay, he missed a free throw, he missed a jumper, it doesn’t matter. That motor is how you win ball games. I tried to do some stuff with Wenyen because I told Derek, ‘I know who you are, I need to keep learning about this kid, which is why I played him more.’

De’Aaron Fox showed his speed. Just, why are you jogging it up? Well, you know, to play that way more than four or five minutes is really hard. But we got winded. I told them, it showed that we’ve got to be in better shape or you’ve got to play less minutes, one of the two.

Q. Do you have an idea of how many guys you would feel comfortable with in a rotation right now?
JOHN CALIPARI: I would say eight or nine and that all depends on how many minutes guys can play. We’re playing to win. If you looked at this, you would have to say Bam stood out.

If you’re playing those three guards, then sometimes you’ve got three guards, sometimes you have two with Dom and Mychal fighting for that other spot. I would say those bigs, again, do you play all nine or do you cut it to eight? That’s going to be when they get in, if they deserve to play, they will get more time. This game was hard for those guys. They were playing guards. They had to move your feet and play a guy that’s not quite as big as you are.

Q. After two big wins like this in the exhibition games, how difficult is it to keep the guys grounded, knowing it’s going to get more difficult?
JOHN CALIPARI: Well, I think they know, but I just told them, I said, we’re going to practice – we have off (Monday), we’re practicing Tuesday and Wednesday and we’re really going to get after it because Thursday I’ve got to back up because we play three games in five days, including travel.

So, there are things we’ve got to get done, and I think they know it. The things we’re doing in practice are bringing out that will to win. But everybody’s going to have to understand, you’re responsible for you and how you play.

Q. There were (a lot) of dunks tonight. Which one was your favorite?
JOHN CALIPARI: I wasn’t watching. I couldn’t even tell you who dunked. I think I saw Malik do something crazy and I saw Wenyen on the break go through guys and dunk, just long arms. And Bam had a couple. Sacha had a couple. But if you stretch us out, I don’t care who you are, if the court is stretched against us, whether you’re trying to slow us down, a stretched court speeds us up. They were speeding us up even more by trapping. Just leaving. And then we got it and just went and now we’re looking at dunks or layups. And so I think, again, we need to – this team’s got to post the ball, we’ve got to be a better defensive team. That’s what we’re going to be, like everybody. We still don’t trust each other, because we’re so young. You’ve got to play team defense, you can’t just play your man, even though you’ve got to guard your guy. And then I think the other thing is that I like the fact we share the ball for two games, we have had 30 assists. And again, I understand they’re exhibition games and we should win both those games by 30, 40, whatever it was but to win real games, to win against Division I teams, you’ve got to execute, you’ve got to post the ball. Defensively, you’ve got to be a team that rotates and at times appears to have six guys on the floor.