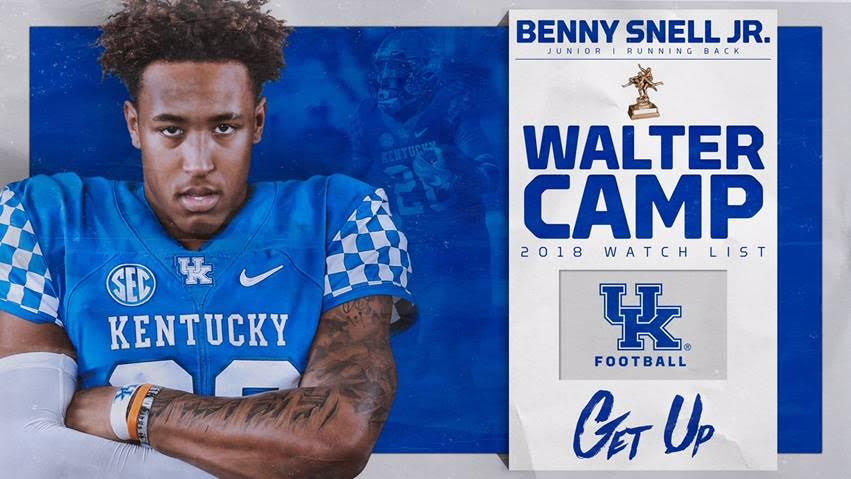 Junior record-setting back among 50 players recognized as some of the nation’s top players
LEXINGTON, Ky. – University of Kentucky junior running back Benny Snell Jr., has been named to the preseason watch list for the 2018 Walter Camp Player of the Year award, it was announced today. College football’s fourth-oldest individual honor is awarded by the Walter Camp Football Foundation.

Snell Jr., (Westerville, Ohio) led the Southeastern Conference in rushing touchdowns (19) and ranked third in total rushing yardage (1,333) and rushing yards per game (102.5) in 2017. His 1,333 rushing yards set a school record for most rushing yards by a sophomore. He also became the first player in school history to record 1,000 yards in consecutive seasons.

The 5-foot-11, 223-pounder also is a preseason candidate for the Doak Walker Award, given to the nation’s top running back, and the Maxwell Award, given to the college Player of the Year. He recently was voted first-team Preseason All-SEC by the league’s media.

Snell is one of 50 players on the watch list for the Walter Camp Award, including 38 offensive players and 12 from the defensive side of the ball. The list will be narrowed to 10 semifinalists in November with the winner voted on by 129 NCAA FBS head coaches and sports information directors and announced live on The Home Depot College Football Awards on Thursday, December 6 on ESPN.