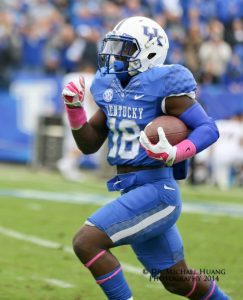 What a difference a year makes. This time last year, “Boom” Williams was preparing for his junior season as the featured running back in Kentucky’s redesigned offense. Coming off two-a-day fall practices, the talented four-star recruit and his Wildcat teammates were eagerly awaiting their much-anticipated season opener against Southern Miss.

Fast forward to this year and “Stanley” Williams is methodically preparing for his life in professional football. Coming off two exhibition games in the NFL preseason, the undrafted free agent was recently picked up by the Denver Broncos after his sudden release from the Bengals.

I caught up with Boom a final time in the Cincinnati locker room after Saturday night’s loss to the Kansas City Chiefs. Without his #18 blue and white jersey, I hardly recognized him at all. He looked like he had bulked up a bit, but while listed at 5’9”, he’s still one of the few NFL players I can actually look in the eye. He also appeared somewhat more reverent, cordial, and accommodating than I remembered from his time at UK.

Life in the NFL is a dream come true for the Monroe, Georgia native. “It’s been fun,” he said with his trademark smile. “I’m just trying to take advantage of every opportunity to showcase my talent, to show that I can help this team in any way the coaches want me to.”

For players like Boom, the NFL preseason is their lottery ticket to a coveted spot on the roster. “The guys who are vying for spots, that’s what the preseason is all about,” said Bengals Coach Marvin Lewis. “When you’re a young guy and you’re getting put in there, you never know when your number’s going to get called. And that’s how they’re trying to win jobs and staying on the football field.”

Easy for the coaches to say, but in his two preseason games, Boom didn’t get much of a chance. He had 11 yards on four carries—a far cry from the 1,170 yards and 7 touchdowns he garnered for the Wildcats last season. The crowded Cincinnati backfield evidently didn’t set Boom up for much success.

Nevertheless, Boom never lacked for confidence in his abilities on the field. He said the biggest adjustment to professional football has been learning the X’s and O’s. “Just having to study the game a little more,” he admitted. “Just studying the playbook. Once you know those things, you’re able to go out there and play freely. The playbook has been the biggest difference—the length of the plays.”

Although outwardly, Boom seemed content with his decision to forego his senior year of college for the play-for-pay circuit, I still sensed just a smidgeon of remorse. Once a Wildcat, always a Wildcat—so reports of him being a distraction in the UK locker room last year are arguably unfounded and a bit unfair. As we finished up our chat, Boom wanted to make sure his heartfelt words reached all his former teammates.

“A shout-out to all my former teammates,” Boom stated enthusiastically. “I know those guys just got done with camp so I’m very excited for them. They open the season up with this team we lost to last year. I’m looking forward to seeing them play Southern Miss. It should be fun.”

Like most Wildcat fans, I would have loved to have seen Boom Williams in a Kentucky uniform for one more year. You can never have too many quality running backs available for the grueling SEC schedule. The team is only another substantial injury away from full blown disaster. The reality, however, is that Boom has moved on to Denver—a team with a little more room in the backfield for him to show off his unique positional skills. He’s another Wildcat pursuing his dreams at the next level. BBN wishes him nothing but the best.