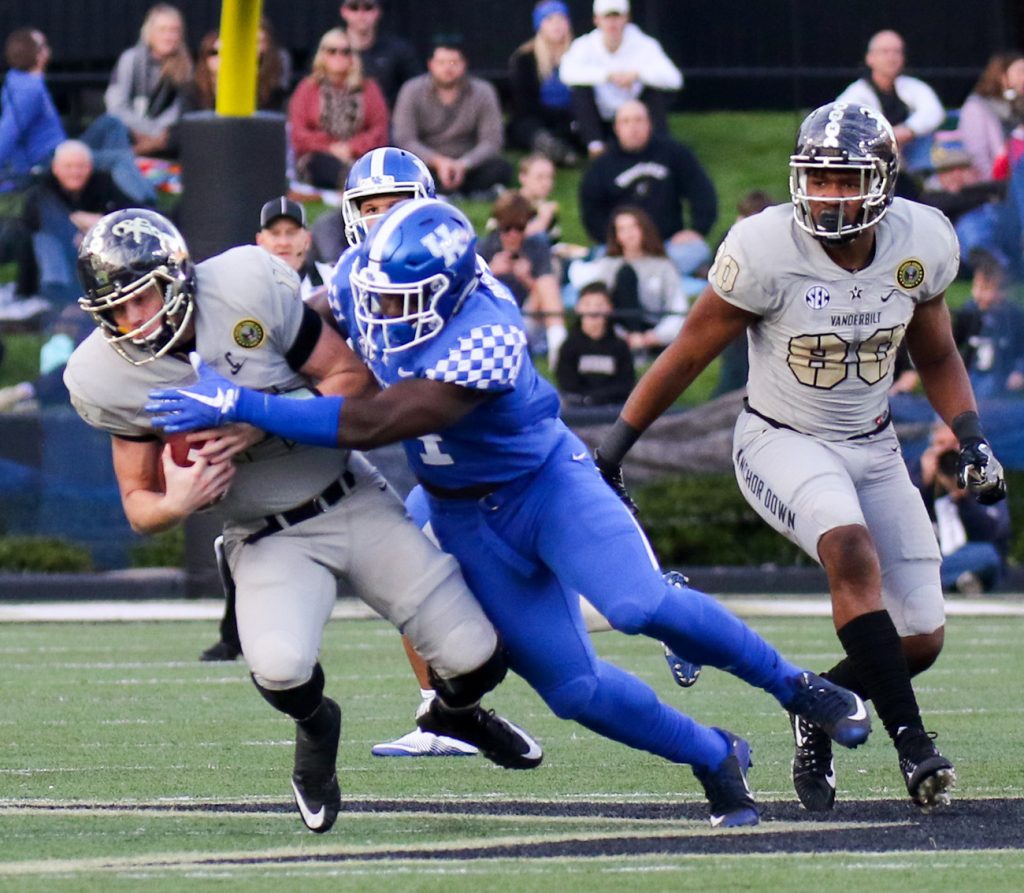 By John Huang
NASHVILLE, Tn. — Vanderbilt University touts itself as an elite academic institution. There are a lot of smart people at Vandy with a haughtiness that’s probably rightfully deserved. With ACT scores soaring through the stratosphere, this “Harvard of the South” is pervasively known for kicking academic sand in the face of its fellow SEC brethren.

In the interest of full disclosure, I never attended Vanderbilt. I couldn’t have gotten in if I begged, borrowed, or bribed. Although I studied hard at the University of Kentucky, pompous Commodore grads are quick to point out that their diplomas came from parchment a cut above my third-rate Wildcat stock.

But what about performance on the football field? Surely some of those snooty Vanderbilt geniuses inevitably filter down through the football team. Does intelligence in the classroom readily translate into success on the gridiron? We’re about to find out. I’m looking at this Kentucky versus Vanderbilt showdown as a final referendum for a question debated for centuries. Once again, it’ll be brains versus brawn, PhDs versus PEDs, and Silicon Valley versus Renfro Valley.

Kentucky and Vanderbilt have long been conference football doormats for as long as I can remember. Only recently has each of the programs shown a penchant for climbing out of the eastern division cellar. Year after year, the Wildcats and Commodores were regarded as bottom feeding fodder—automatic “W”s and homecoming sacrifices for the SEC heavyweights on their way to a championship. Academically, however, Vanderbilt remains a top fifteen school nationally. Kentucky clocks in at a pedestrian number 133.

Kentucky head coach Mark Stoops weighed in on the brains versus brawn debate in his press conference earlier in the week. “Yeah, I definitely think there is,” he replied when asked if there’s any correlation between book smarts and athletic success. “I think there’s examples of the contrary as well. I think there’s examples either way. I certainly have respect for Coach Mason and what he does and their players. I’m sure they respect ours as well.” There you have it—typical coachspeak. Smart people make for better football players—except when they don’t. Let’s settle this once and for all.

Just driving onto the Vanderbilt campus boosts your IQ at least fifteen points. Evidently that was more than enough today to propel the underdog Wildcats to a decisive 44-21 beatdown over their more cerebral opponent. Benny Snell Jr. was summa cum laude, rushing for 116 yards on 17 carries and three scores. Stephen Johnson made the Dean’s List as he completed 13-17 passes for 195 yards. Sihiem King and Miles Butler were both scholarship worthy, the former scoring his first two touchdowns of the season and the latter filling in admirably for the suspended Matt Panton. Austin MacGinnis and Lynn Bowden Jr. also get gold stars for their special teams play.

If Kentucky’s grade point average for this game was a 4.0, Vanderbilt’s was a dismal 1.5. Time after time, the Commodores failed the test. Quarterback Kyle Shurmur’s decisions alone should have put him on academic probation. Either that, or his brainy teammates simply failed to execute early on. Also give the Kentucky defense credit for a semi-revitalizing performance. Last week, they couldn’t defend a master’s thesis, much less the Ole Miss receivers. This week they came up with four huge interceptions before succumbing to Vandy’s garbage time barrage. Ordinarily, playing the Wildcats is like being graded on a curve. Even with help from the proctors today, the Commodores still bombed miserably.

In this rival series, the results are crystal clear to me–it’s brawn over brains. With the victory, Kentucky now takes a 44-42-4 advantage over the Einsteins of Vandy. According to my math, that’s an unmistakable two game advantage, regardless of where you earned your diploma. The Cats move up to 7-3 on the year with a formidable exam at Georgia looming next week. For the hoity-toity scholars of Vanderbilt University, it’s back to the study halls for some remedial tutoring.

Mark Stoops was understandably pleased with his team’s brawn AND their brains. “(We had) the toughness and the attitude that we were looking for going on the road and winning that game,” he said in his post-game press conference. “But I think there’s more to it than just smash mouth. I think when we scheme people and formation people and doing some creative things in the run game, and of course Stephen making some good decisions—hurt them with his legs again. You put it all together and we’re effective.”

So, is it brains or is it brawn? Like choosing between the great foundational dilemmas of predestination versus free will, or faith versus works—it’s undoubtedly a little of both. The debate rages on.