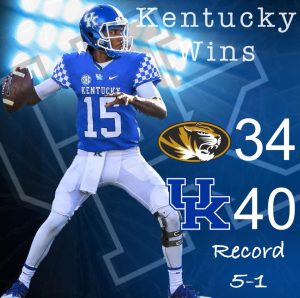 Ty Back – Lexington, KY
In a misting rain, the Kentucky Wildcats scratched out another win at Kroger Field against SEC opponent Missouri, 40-34. This Kentucky team continues to play to the level of the competition giving the Missouri team a chance to at least tie on the last play of the game. 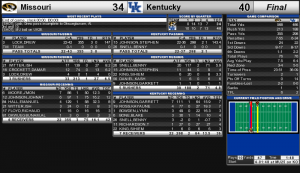 Offensive highlights of the game:
Kentucky’s offense looked solid tonight but never took over the game like we had been hoping for.  UK put up a season high 40 points tonight and also a season high of 468 yards of offense.

Benny Snell broke a career high 76 yard run for a touchdown and finished with 122 yards in the game and 2 touchdowns.  Snell even attempted a pass to CJ Conrad but Conrad couldn’t haul it in near the goal line.

Defense Summary:
Injuries to the UK defense took their toll.  Pringle, Westry, and Beatty were all hurt at one point in the game.  Pringle and Westry would not return.

With injuries to key Wildcat defensive players, the Missouri Tigers hit on some big plays.  Missouri QB Lock found E. Hall for a 58-yard touchdown for Missouri’s first score of the game.  UK also gave up a 75-yard touchdown pass to Johnathan Johnson to tie the game at 34.

A fake punt in the fourth quarter of a tied game saw Kash Daniel rush for a gain of 6 yards for the first down that ultimately put UK in field goal position where A. MacGinnis put the Cats ahead for good.

Missouri’s 45-yard field goal attempt to tie the game with 6:15 to play was blocked and recovered by UK’s Quinton Bohanna.

Austin MacGinnis made 4 FG and 4 extra points to take over the all time scoring record at UK with a total of 310 points.

Kentucky is now 5-1 for the first time since 2014 and with one more win will become bowl eligible for the second straight year.  Citrus Bowl officials were in the house tonight and liked what they saw out of the Cats.  If the Cats keep winning, a trip to Orlando may be in the cards.

Kentucky is off for some much needed rest next week.  They’ll return to action on October 21st where they travel to Mississippi to take on the Mississippi State Bulldogs.