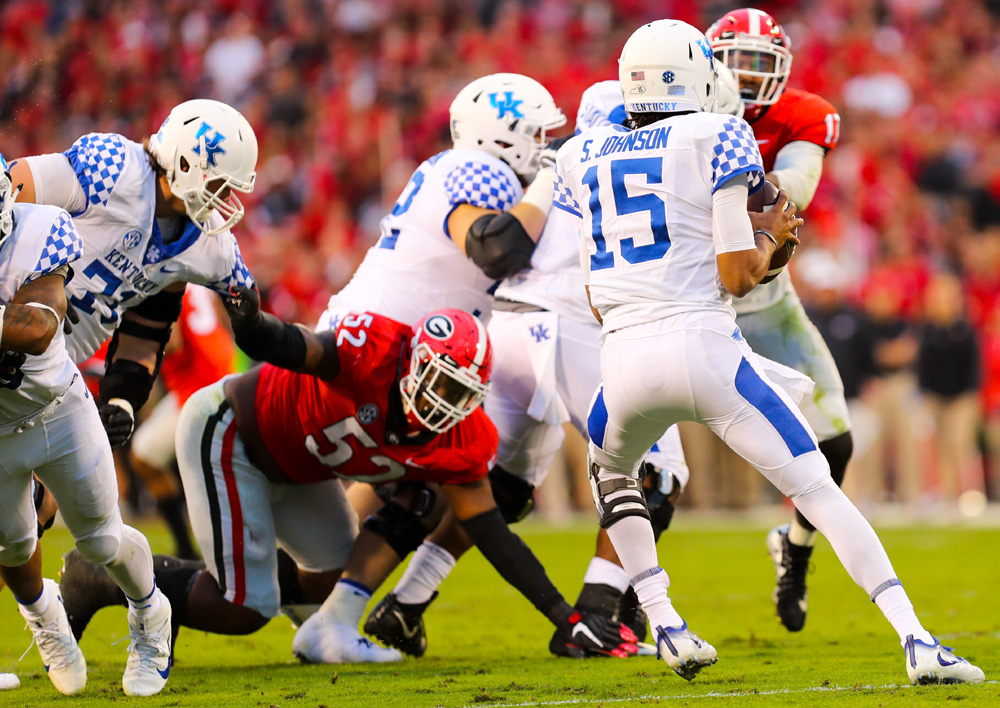 By Ricky Blair
Athens, GA – The Kentucky Wildcats walked into Georgia’s Sanford Stadium to face an angry group of Bulldogs.  The Bulldogs were coming off their first loss of the season; a 40-17 beat down at the hands of the Auburn Tigers.

For Kentucky the Bulldogs presented several problems.  First they were surely going to come into the game fired up after a lackluster performance down on the plains of Auburn.  Georgia also came into the game allowing only 14.5 points per game which was second in the SEC and No. 5 nationally.  Georgia was also 2nd in both rushing offense and rushing defense in the conference.  Plus it was senior day for a group of Bulldogs that have been special to the Georgia fan base.  Running backs Nick Chubb and Sony Michel in particular have had spectacular careers.  They will both go down as two of the all-time best in the long history of Georgia running backs.

Despite all the festivities and focus by Georgia it was Kentucky who got the first break when UGA freshman quarterback Jake Fromm threw an interception to UK’s linebacker Josh Allen three minutes into the game.  Allen returned the ball 14 yards to the UGA 32-yardline.  The Wildcats managed a first down on the running of Benny Snell, but the drive stalled and the Wildcats had to settle for a 37-yard field goal by Austin MacGinnis.  This gave the Wildcats an early 3-0 lead.

After the Wildcats got a stop on the next possession it looked like things were going their way, but an aggressive move backfired as the Wildcats went for a blocked punt.  Lonnie Johnson Jr. ran into the punter on the play and roughing was called against the Wildcats to give the Bulldogs a first down and another chance to get their offense going.

The roughing penalty became costly as Georgia marched straight down the field and scored a touchdown on a Nick Chubb 6-yard run.  The score gave Georgia a 7-3 lead.

The Cats come back with a little trick play on their next offense possession.  Quarterback Stephen Johnson went wide as the Wildcats lined up in the Wildcat formation, Johnson then went in motion and stopped behind the center.  The snap to Johnson caught Georgia off guard and Johnson hit wide out Blake Bone with a 35-yard completion.  The Cats couldn’t get much closer and had to settle for another MacGinnis field goal, which cut the Georgia lead to 7-6.

On the Cats next possession, they blew an opportunity to score, then Georgia immediately drives 80 yards on six plays for a touchdown when Fromm hits Javon Wims for a 27-yard score.  That put the Dogs up 14-6.  Georgia’s very next possession they score again; this time on a Sony Michel 37-yard run.  The Bulldogs lead increased to 21-6 on that touchdown, which happened right before halftime and they never looked back.

In the second half, it was pretty much all Georgia.  Kentucky did score on its opening drive of the half, but after that score, it was a track meet for the Georgia offense as they marched to one touchdown after another.  When the smoke finally cleared, the Bulldogs had a 42-13 victory over the Wildcats and a happy fan base, as they are SEC East Champions for the first time, since 2012.

For Kentucky, they will need to regroup in a hurry, as they take on their heated rivals, the Louisville Cardinals this coming Saturday at Kroger Field.