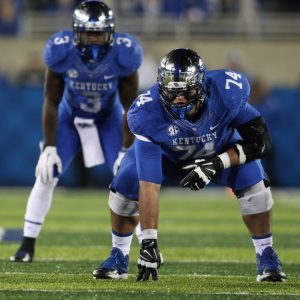 Senior offensive tackle played in 32 career games with 13 starts at left tackle
LEXINGTON, Ky. – Kentucky offensive tackle Cole Mosier suffered a torn anterior cruciate ligament in his right knee during Saturday’s scrimmage and will miss the 2017 season. The senior from Walton, Ky., is not eligible for a sixth season, thus ending his Wildcat career.

Mosier, a 6-foot-6, 335-pounder who was slated to start at left tackle for the Wildcats again this season, is scheduled to have surgery on Thursday, Aug. 17. He is on track to graduate in December with a degree in political science.

“We’re extremely disappointed about Cole’s injury,” Coach Mark Stoops said. “He has been with us all five seasons we’ve been at Kentucky. He helped set the example of hard work that is the theme of this program, as he came in as a walk-on and earned a scholarship. We know Cole will continue to support his teammates this season and we wish him the best in his recovery and in the future.”

In 2016, Mosier was an integral part of the offensive line who were named semifinalists for the Joe Moore Award, which recognizes the nation’s Most Outstanding Offensive Line. Blocking for Boom Williams and Benny Snell, UK was the only team in the SEC with two 1,000-yard rushers. Mosier played in 10 of 13 games, helping the Wildcats advance to their first bowl game in six years.

Overall, Mosier played in 32 games with 13 starts at left tackle. He came to Kentucky as a walk-on from Walton-Verona High School before earning a full scholarship as a redshirt sophomore.

“Tearing my ACL was a big blow and it’s unfortunate because I wanted to finish my career here at UK with my teammates,” Mosier said. “However, I’m going to have surgery on Thursday and I plan to rehab my knee in order to participate in UK’s Pro Day in March. I want to thank Coach Stoops and Coach Schlarman for everything they’ve done for me. I also want to thank the Big Blue Nation for their support. Coming here as a walk-on and then earning a scholarship was a dream come true. I’m going to continue being around the team to cheer them on and help the team as much as I can.”