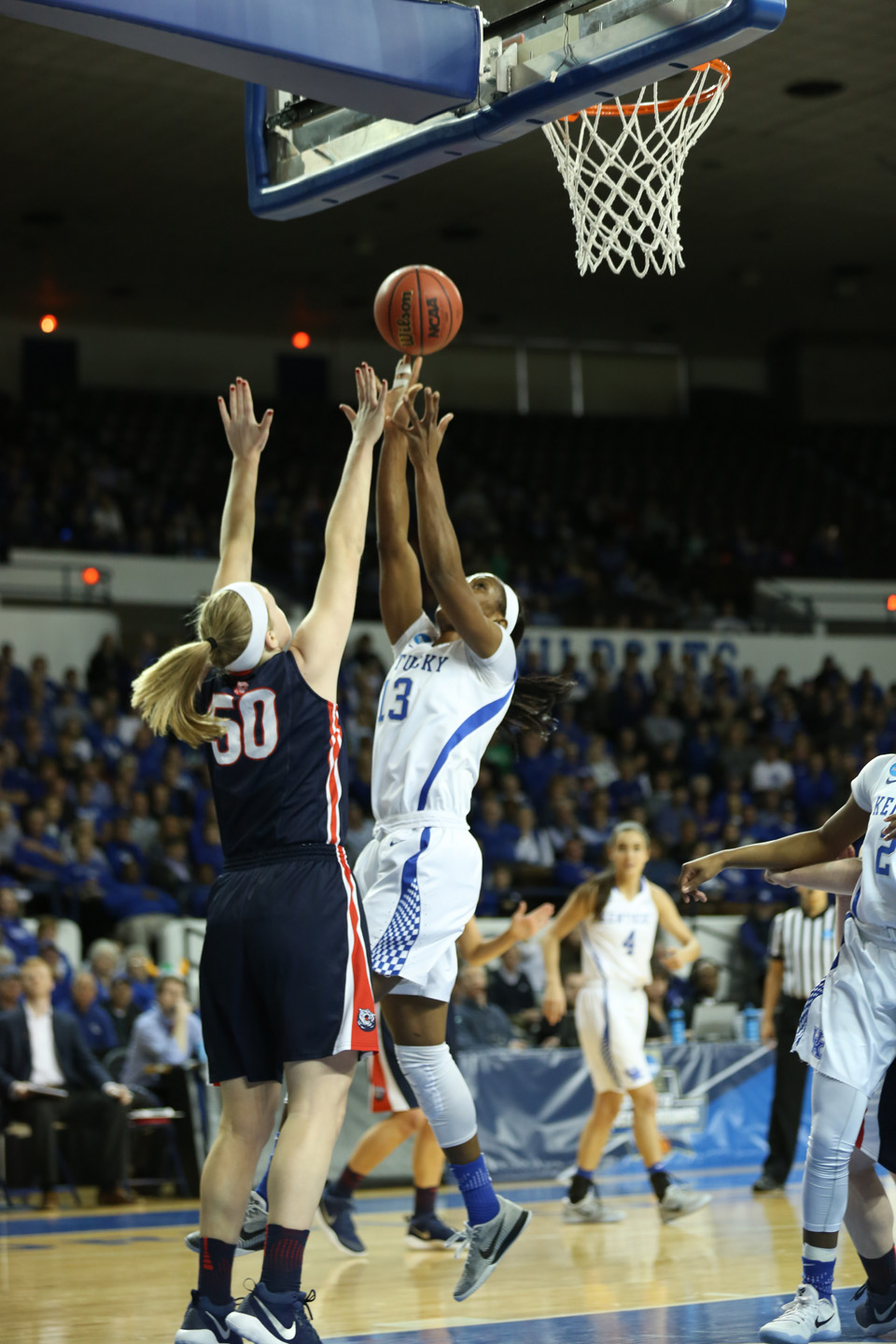 UK defeats Belmont in opening round – Photo by Teresa Fraley

2017 NCAAA Division I Women’s Basketball Basketball Championship – First Round
Kentucky vs. Belmont
March 17, 2017 – Memorial Coliseum – Lexington, Kentucky
The Lady Cats came into the first round of the NCAA with a 21-10 season record and the reward of a home court advantage to take on the (27-5) Lady Bruins of Belmont.
After a third straight loss to powerhouse South Carolina, the Cats were ready for redemption. In their sites was breaking Belmont ’s 21-game winning streak. It would prove to be difficult.
The first half saw Makayla Epps taking the scoring lead for the Cats with 14 points, followed by Evelyn Akhator with 12. Playing a tough man to man defense, the Cats were on fire and put a 12 point lead on the Bruins. Lighting up themselves, the Bruins battled back as the half time approached with Kylee Smith racking up a total of 18 points and a team scoring percentage of 60%. The Bruins eliminated the Cats’lead, out rebounding the Cats 20-9 and running into the
locker room up 36-35.
The Cats came out strong again after the half, scoring 13 unanswered points and capturing the momentum, with Epps, Akhator and Alyssa Rice all contributing to the lead. The Bruins,
though, were still in fight, battling back to keep the game close. As the game wound down, the Cats were up by two points at 68-66 with 28 seconds to go. By the time the clock wound down to just 13 seconds, Belmont is at the foul line shooting two. Sally McCabe swishes both, keeping the Bruins in the game 69-68. After that, it was the Maci Morris show at the free throw line. Sinking five at the stripe, Morris’ consistent free throw shooting kept the Cats in the lead. As the buzzer sounded, the Cats claimed their NCAA First Round victory 73-70 and go on to face the Buckeyes of Ohio State University in the second round.
The Cats ended up with some impressive stats:
Makayla Epps scored 30 points and Evelyn Akhator put in 22. Adding Maci Morris’ 15 points, including those 7 charity stripe points (an88% free throw average for the day), the Lady Cats have one in the bag and are on to challenge the Lady Buckeyes on Sunday, March 19 in Lexington.
Related TopicsUniversity of Kentucky