UK Hoops – Kentucky Comes Up Short Against No. 10 South Carolina 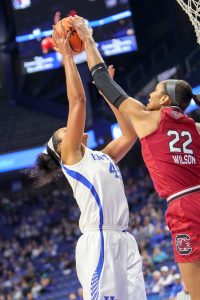 LEXINGTON, Ky. – Maci Morris scored 19 points and Taylor Murray added 17, but the Kentucky women’s basketball team lost to No. 10 South Carolina 81-64 on Sunday afternoon at Rupp Arena.
Morris returned to the lineup after missing Monday’s game at Vanderbilt with a knee injury. In her return to the lineup, the 6-0 junior from Pineville, Kentucky, hit six of her 15 shots from the floor, including two of five from behind the arc. Morris made all five of her free throws.

A pair of freshmen had career-high scoring efforts for Kentucky on Sunday. KeKe McKinney had a career-high 12 points and tied a career-high with seven rebounds in the game, while classmate Dorie Harrison had a career-best 11 points.
Kentucky (9-11, 1-5 SEC) forced 17 South Carolina turnovers, converting those into 23 points. The Wildcats were able to grab 15 offensive rebounds against the much taller Gamecocks, and Kentucky had the edge in second-chance points, 17-7.

The Gamecocks shot a sizzling 60.4 percent from the floor in the game, including 79.2 percent in the second half. Kentucky hit 38.7 percent of its shots from the field.

South Carolina scored the first four points of the game, but Kentucky answered with a three-pointer by Makenzie Cann and fast break layup from Taylor Murray to take a 5-4 lead. South Carolina scored the next four points before a Murray layup and free throw tied the game at 8-8. The Gamecocks took a 10-8 lead before Kentucky scored four in a row to lead 12-10. But South Carolina made three free throws inside the final minute of the period to lead 13-12 after one quarter.

Kentucky took a brief lead, 14-13, early in the second quarter on a jumper by Jaida Roper. But the Gamecocks responded, outscoring the Wildcats 21-6 to end the half, taking a 34-20 lead into the break.

In the third period, South Carolina missed its first shot, then hit its next eight in a row, extending the lead to 48-29 at one point. Kentucky would claw its way back, and when McKinney hit a three-pointer from the top of the key, the Wildcats cut the lead to single digits, 56-48. But South Carolina’s Bianca Jackson answered with a three of her own, giving the Gamecocks a 59-48 advantage after three periods.

Kentucky would cut the lead to 12 at one point in the fourth quarter, but the Wildcats would get no closer.

Kentucky returns to action on Thursday, as the Wildcats host Alabama at Memorial Coliseum. Tipoff is set for 7 p.m. ET and the game can be seen on ESPNU.