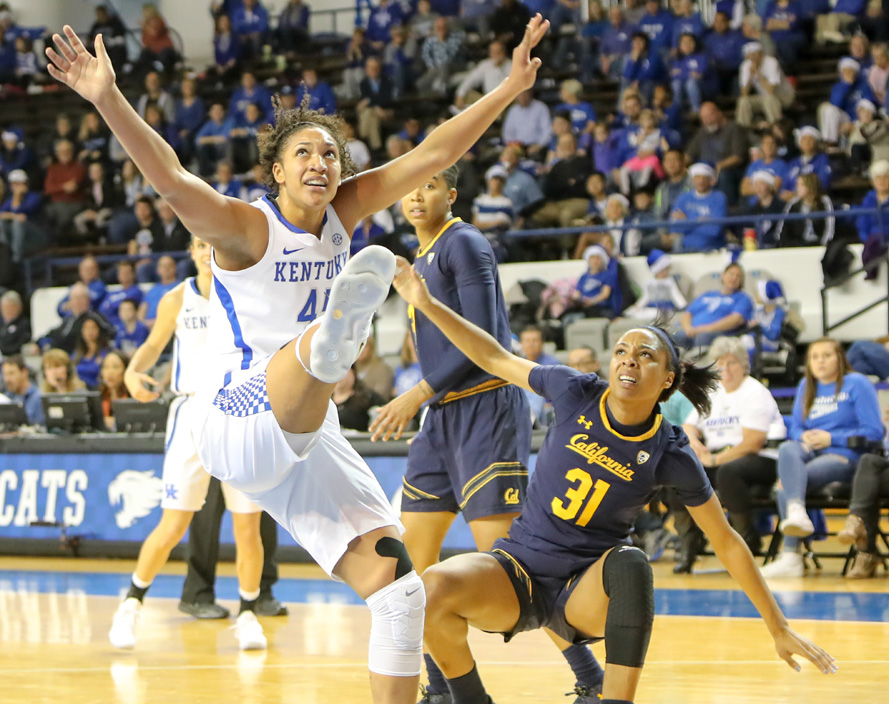 Freshman Tatyana Wyatt added 10 points, her sixth double-figure scoring effort in eight outings so far this season, while senior Alyssa Rice led all players with 10 rebounds in the game.

Kentucky made just one of its first 11 shots from the field, but Wyatt came off the bench to hit a three-pointer that gave Kentucky a 10-9 lead midway through the first quarter. The Wildcats would go on to hit four of their next six shots from the floor to take a 17-10 lead. But Cal answered with five straight points before Morris nailed a three to make it 20-15, which would be the score at the end of the first period.

Cal opened the second period on a 7-2 run to tie the game at 22 apiece. The game was tied at 26-26 when both teams went cold. In fact, more than three minutes ran off the game clock before Rice hit a free throw with 2:33 left in the half to give the Cats a 27-26 advantage. But Cal added a pair of field goals inside the final minute of the half to take a 30-27 lead into the half.

The Wildcats scored the first six points of the third period to take a 33-30 lead. But the Bears answered with four straight to re-gain the advantage, 34-33. Kentucky took a 37-36 lead on a pair of free throws by Wyatt, but Cal answered by scoring 10 straight points to lead 46-37 at the end of three quarters.

In the fourth quarter, Kentucky scored first when Wyatt nailed a three from the top of the key to cut the lead to 46-40. But the Wildcats would get no closer.

Kentucky returns to action next Thursday, as the Wildcats face Middle Tennessee in Murfreesboro, Tennessee. Tipoff is set for 7:30 p.m. ET.