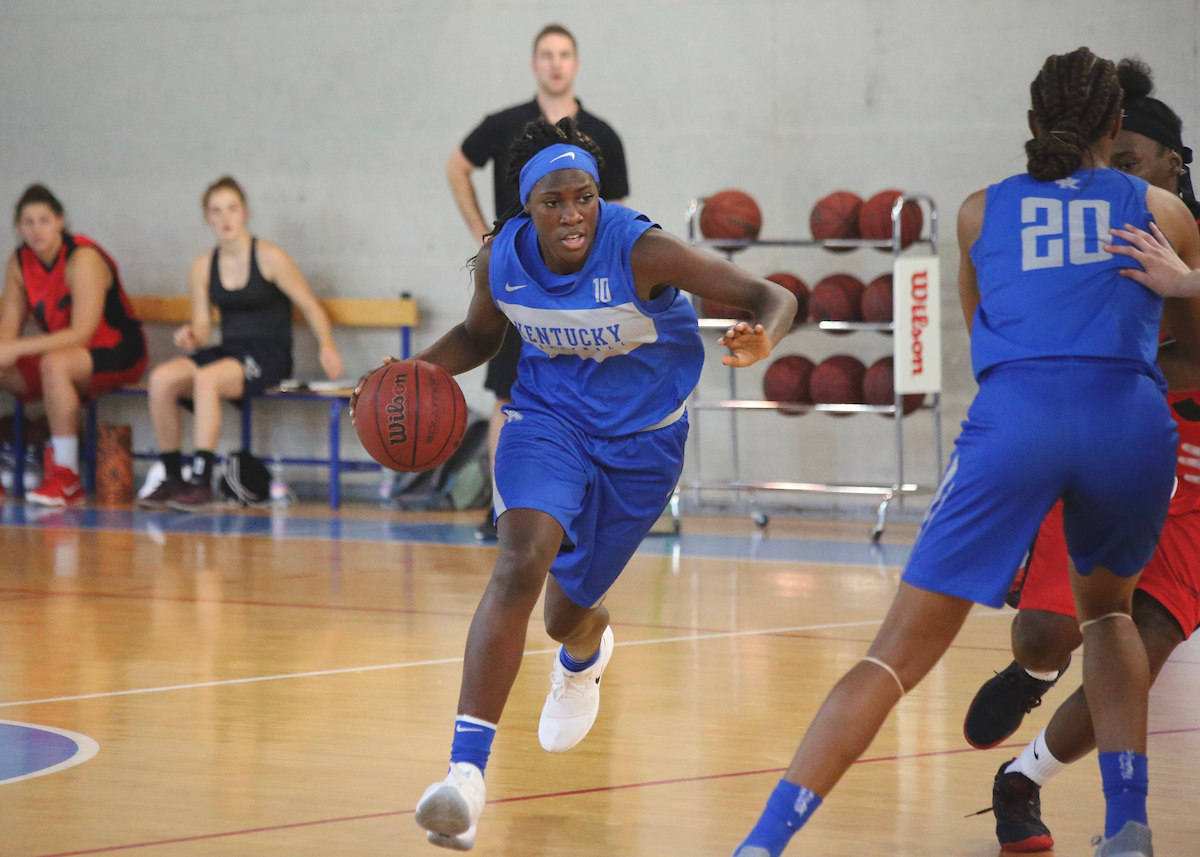 The women’s basketball team claims an 81-64 victory against Marghera on Friday, August 10, 2018, on their summer trip to Italy.
Photos by Noah J. Richter | UK Athletics

Kentucky, which struggled to find its shooting touch in its second game of the foreign tour, had no problem filling the stat sheet Friday, shooting 40 percent from the field and hitting eight 3s. Defensively, the Wildcats were all over the court, forcing Marghera into 39 turnovers on 23 UK steals. Marghera, who won the rebounding battle 40-34, shot just 38 percent from the field and hit seven 3-pointers. After shooting 13 free throws in the first half, Marghera did not reach the charity stripe in the second half.

“We were disappointed with our second game, but what we decided to do was to try to find some lessons that could be learned from the game and apply them positively to tonight’s game,” UK head coach Matthew Mitchell said. “I was really pleased with the players this afternoon. We had a team meeting and just tried to get off our feet more today than we did before that second game. We really had a lot of activity the day prior, as we did yesterday, but before the game we were walking around and touring and we just tried to manage our energy a little bit today. It was by far the most difficult conditions as far as the heat in the gym goes, it was very, very hot. The first quarter was good, I didn’t think the second quarter went that great, but we regrouped at halftime and had a strong finish to the tour from a basketball standpoint.”

Morris paced the Wildcats offensively, going 7-of-10 from the field with six of the seven made shots being from long range. Her 24 points were the most scored by a Wildcat in the three-game foreign tour. The senior also added three rebounds, three steals and went 4-of-4 from the free-throw line. Freshman guard Rhyne Howard scored 15 points in her UK debut after missing the first two games of the tour while playing for the USA U18 Team in Mexico City. Howard added four rebounds and four steals in the game. Sophomore forward KeKe McKinney was the only other Wildcat to score double figures, posting 11 points with three rebounds and two steals.

“It is such a benefit to have these three games, especially with one of them being against really tough competition where the team could identify what we need to do to be a really special team,” Mitchell said. “We are not necessarily going to out talent people and roll the ball out. We are really going to have to become a great team and I think we have the makings of that spending so much time together playing in some adverse conditions and being able to actually have a few practices to get a head start on the season are all good things. We are further along this time than we were a year ago. What an unbelievable group of players and young people who have invested each day in making sure this is an experience that they can draw on for the rest of their lives. I have been so impressed with their attitude and their energy. We have just had a fantastic time.”

The Wildcats started the foreign tour with a 73-41 victory over the Bosnia and Herzegovina National Team in Rome on Sunday before a 64-46 loss to the TK Hannover professional team Tuesday. Kentucky is now 22-3 all-time in international play after finishing the trip 2-1. The Wildcats started the tour in Rome for three days before two days in Florence and two nights in Venice. The Wildcats will travel to Lake Como Saturday to complete the trip before returning back to the Bluegrass State on Monday. The foreign tour is the first for the UK program since traveling to France and Switzerland in May of 2001.