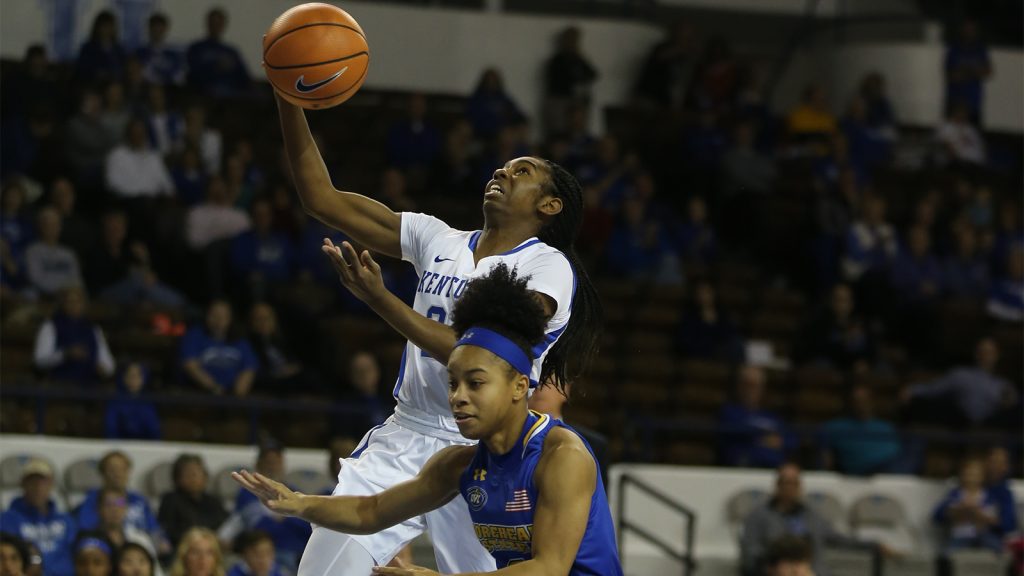 Murray with the drive, (photo by UK Athletics)

“Florida Gulf Coast is a terrific team and they came out with tremendous passion and desire,” UK head coach Matthew Mitchell said. “They wanted the game very badly and you have to give them all the credit. They were really well prepared, well coached and executed awesome. They just whipped us tonight and were much more enthusiastic in the game. It was a great crowd and a great environment. I cannot say enough good things about Florida Gulf Coast.”

The Wildcats placed three other players in double figures in the contest. Alyssa Rice, Jaida Roper and Tatyana Wyatt each scored 11 points for Kentucky, which hit just 39.4 percent (29 of 66) of its shots from the field, including just two of nine from behind the arc.

Kentucky (8-2) took an early six-point lead in the first quarter, but the Eagles outscored UK 16-6 the rest of the quarter to lead 18-14 after one period. Murray and Roper each had four points for the Wildcats, who hit just six of their 20 shots from the field (30 percent). All 14 of Kentucky’s points came in the paint, as the Wildcats missed both of their three-point shots in the first quarter.

In the second quarter, FGCU extended its lead to as many as six early. Kentucky tied the score at 26-26 on a jumper by Amanda Paschal with 4:04 left in the period. The Wildcats would not score again in the period, and the Eagles scored nine straight to lead 35-26 at the break.

Quarter three saw FGCU extend its lead again behind its three-point shooting. The Eagles would lead 43-29 after a three-pointer by Rosemarie Julien with 6:34 left in the third period. Later in the quarter, Julien hit another three, this time making it 46-33. But Kentucky then got five consecutive points from Wyatt to cut the lead to 46-38. The Wildcats would get within four, 48-44, but FGCU scored the last four points of the period to lead 52-44 after three quarters. Wyatt had nine of Kentucky’s 18 points in the quarter.

But the Eagles (9-2) scored the next nine points of the contest to take a 66-57 lead with 3:32 left in the game. The Cats were able to cut into the lead on a three-pointer by Roper and a pair of baskets by Murray to cut the lead to 66-64 with 1:06 remaining. But FGCU hit four free throws down the stretch to seal the victory.

Kentucky returns to action on Sunday, as the Wildcats visit Miami (Fla.). Tipoff is set for 1 p.m. ET and the game can be seen on the ACC Network Extra.