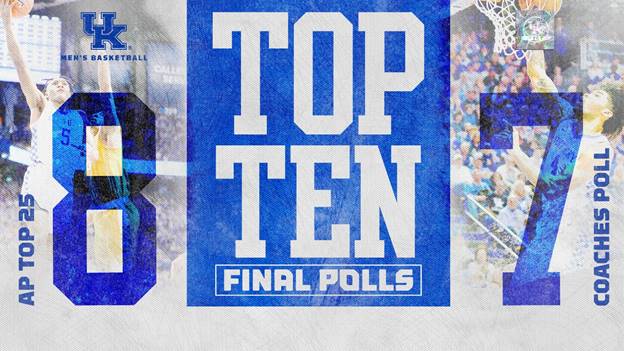 The Wildcats, who posted a 25-6 record in 2019-20, won another Southeastern Conference regular-season championship – the program’s 49th – and were set to make what would have been the program’s 59th NCAA Tournament appearance, were ranked No. 7 in the final USA Today Coaches Poll and No. 8 in the AP Top 25.

Both polls were released this week after the NCAA Tournament was canceled due to the COVID-19 pandemic.

Kentucky was ranked inside the top 20 in both polls throughout the season, including reaching No. 1 in the AP Top 25 in November, the seventh time in John Calipari’s 11 seasons the Wildcats ascended to the top of the AP poll.

UK fell as low as No. 19 in the rankings in late December after losing back-to-back games in Las Vegas, but the Wildcats made a steady climb from that point forward. Ranked No. 19 in both polls heading into the Louisville game, Kentucky won 17 of the next 20 games to finish the season, capturing the SEC regular-season title for a sixth time in the 11-season Calipari era.

Kentucky reached the top 10 by mid-February and stayed there heading into the now-canceled SEC Tournament. It’s the seventh time in the Calipari era the Wildcats have finished in the top 10 of the AP Top 25 and the eighth time in the USA Today Coaches’ Poll. Kentucky leads all schools with 45 AP top-10 finishes.

The Wildcats have been a mainstay in the AP Top 25 under Calipari. In the 200 polls in the Calipari era, Kentucky has been ranked 182 times.

This team, despite a lack of a postseason, will go down as one of Calipari’s most memorable groups. Forced to retool once again after losing four players to the professional ranks, including three in the first round of the NBA Draft, UK reloaded with a blend of talent, youth and some uncommon experience (by recent standards). While Calipari had another top-ranked recruiting class to help fill the losses, the story of the 2019-20 Wildcats was the development of its veteran core.

Immanuel Quickley evolved from a freshman reserve to the SEC Player of the Year in his sophomore season, leading the Wildcats in scoring (16.1 points per game), 3-point shooting (62 3-pointers on 42.8% shooting from behind the arc) and elite free-throw marks (92.3% shooting, third in the country). Junior forward Nick Richards, who struggled to consistently produce in his first two seasons, became a double-double machine and an All-SEC First Team performer, leading UK in rebounds per game (7.8), blocks per game (2.1) and field-goal percentage (64.4%, ranked fourth nationally).

Ashton Hagans continued to be one of the nation’s best defenders while leading the SEC in assists per game (6.4), and sophomore forward EJ Montgomery found his footing in the second half of the season with a consistent energy and fight to his game.

Freshman Tyrese Maxey lived up to the recruiting hype by averaging 14.0 points with a team-high three games of 25 points or more, and newcomers Nate Sestina, Keion Brooks Jr. and Johnny Juzang all played key parts, especially in what would end up being the season finale, an 18-point second-half comeback at Florida.

In the end, Kentucky had the look of another dangerous Calipari group primed for a postseason run with stingy defense – UK ranked 20th in the country in defensive field-goal percentage (.394) – a penchant for closing out close games, and a consistent ability to capitalize at the free-throw line, where the Wildcats shot 79.7% for the season, a school record and the third-best mark in the country.

“I felt like we were going to win the whole thing,” Calipari said of his team heading into the postseason.

UK shined brightest in the most difficult situations, posting an 8-2 record on the road and rallying in times of crisis. The Wildcats reeled off six straight victories after the stunning loss to Evansville, won the SEC title after back-to-back losses in Las Vegas, and notched an unforgettable comeback at Florida just days after blowing a stunning 17-point lead at home vs. Tennessee – and doing so without Hagans in the lineup.

Kentucky was also 14-5 vs. quadrant one and two teams in the NCAA Evaluation Tool and 4-2 vs. AP Top 25 teams at the time of the matchup.