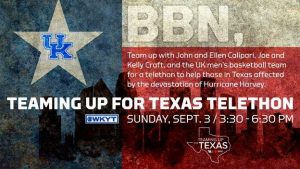 LEXINGTON, Ky. – Humbled by the devastation of Hurricane Harvey, John and Ellen Calipari, Joe and Kelly Craft, and the Kentucky men’s basketball team – in conjunction with WKYT – will host a telethon Sunday from 3:30 to 6:30 p.m. on WKYT and its affiliates across the state. One hundred percent of the proceeds will go to the American Red Cross to benefit the victims of the catastrophic storm.

The “Teaming Up For Texas” telethon will air throughout the state (current affiliates are below), as members of the UK men’s basketball team will take phone calls and donations. Special guests are expected to participate in the show.

Details on how to donate and the telethon phone numbers will be released closer to the telethon.

“I have not been able to stop thinking about everyone who has been affected by Hurricane Harvey,” John Calipari said. “Every time I turn on the TV, I’m stunned at the images of devastation in Texas. It hits home for me because of the players we’ve had come from that area, including Andrew and Aaron Harrison, De’Aaron Fox and now Jarred Vanderbilt. Thankfully their families are safe, but there are a whole lot of people down there who aren’t as fortunate.

“The Big Blue Nation has already been terrific in helping us raise $150,000 for the victims of Hurricane Harvey by showing up to last week’s UK Alumni Charity Game and the response to the University of Houston’s call earlier this week for clothing has been terrific, but we can do even more. I hope our fans will join me, Ellen, Joe and Kelly Craft, and our team in helping raise money this weekend. No donation is too small.”

Teaming Up For Texas will be streamed live at WKYT.com, UKathletics.com, CoachCal.com, and on the official @UKCoachCalipari and @KentuckyMBB Facebook pages.