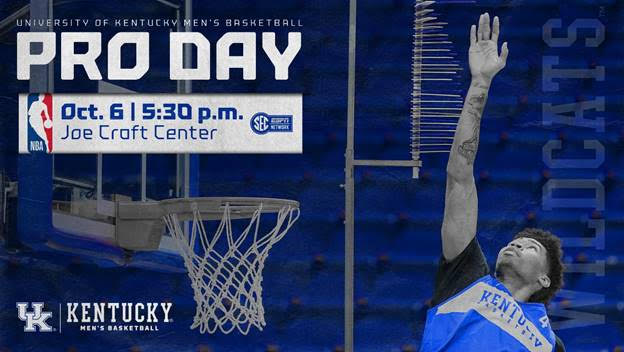 The Kentucky practice will be televised live on SEC Network

LEXINGTON, Ky. – The Kentucky men’s basketball team’s annual Pro Day, which provides NBA organizations with an up-close look at the current Wildcats’ roster, has been set for Oct. 6 in the men’s practice gym of the Joe Craft Center.

As usual, it won’t just be the NBA teams that get to watch.

With SEC Network televising the event for a sixth consecutive season, fans will once again get to see behind the curtain as UK gets ready for the 2019-20 season. The televised portion of Pro Day will air live from 5:30 to 7:30 p.m. Seth Greenberg and Jimmy Dykes will be on hand to call the action for SEC Network.

Because of ongoing construction in Rupp Arena, Pro Day will make a return to the Craft Center, UK’s on-campus practice facility. The first three years were held in the Craft Center before moving to Rupp Arena for the following two.

All 30 NBA teams are invited to the annual Pro Day, where the Wildcats will go through a combine-like practice conducted by Kentucky coaches and staff. Coaches and staff will direct the players through various agility and shooting drills in addition to 3-on-3 and 5-on-5 scrimmaging. All 30 NBA teams were represented during the previous five seasons.

The televised practice will serve as a warm-up before Big Blue Madness, which will take place the following week, on Oct. 11, in Rupp Arena.

The full 2019-20 schedule was released earlier this week with most of the tip times and TV designations. The schedule is available to view at UKathletics.com.