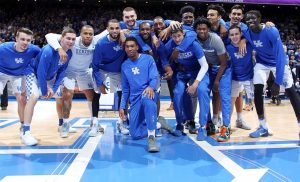 The Kentucky practice will be televised live on the SEC Network
LEXINGTON, Ky. – Kentucky men’s basketball’s annual Pro Day, which provides NBA teams with an up-close look at the current Wildcats’ roster, has been set for Oct. 8 in Rupp Arena.

But it won’t just be NBA teams that get to watch.

Kentucky fans will once again get a sneak peek, as the SEC Network will televise the practice live from 7 to 9 p.m. It’s the fourth consecutive season UK’s Pro Day will be televised. Sean Farnham and Seth Greenberg will be on hand to call the action for the SEC Network.

In a new wrinkle this season, this year’s Pro Day will take place in Rupp Arena. The previous three years were held in the Joe Craft Center, UK’s on-campus practice facility.

All 30 NBA teams are invited to the annual Pro Day, where the Wildcats will go through a combine-like practice conducted by Kentucky coaches and staff. Coaches and staff will direct the players through various agility and shooting drills in addition to 3-on-3 and 5-on-5 scrimmaging. All 30 NBA teams were represented during the previous three seasons.

The televised practice will serve as a warm-up before Big Blue Madness, which will take place the following week, on Oct. 13, in Rupp Arena.

Kentucky is coming off a 32-6 season that included both the Southeastern Conference regular-season and tournament championships. The Wildcats will have to replace 92.6 percent of their scoring and 76.6 percent of their rebounding from a year ago, but as John Calipari has done in every season he’s been at UK, he’s reloaded with even more talent.

Calipari will welcome seven newcomers to the 2017-18 roster. The signing class was regarded by the Recruiting Services Consensus Index as the best recruiting haul ever in its rankings.

In addition to the star-studded recruiting class, UK will also welcome back returners Wenyen Gabriel, Sacha Killeya-Jones and Tai Wynyard, in addition to Hamidou Diallo, who enrolled midyear last season but did not play.