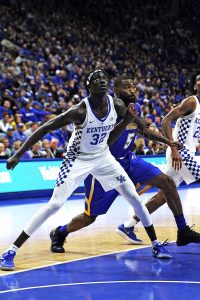 The Wildcats have started the season in the AP top five in seven straight seasons
LEXINGTON, Ky. – National expectations, at least among national media, have not changed for the Kentucky men’s basketball team despite arguably John Calipari’s biggest roster reload yet.

Tasked with replacing 92.6 percent of its scoring and 76.6 percent of its rebounding from a season ago, the Associated Press has tabbed Kentucky No. 5 in its first AP Top 25 rankings of the season.

Duke will begin the season at No. 1, followed by Michigan State, Arizona, Kansas and UK.

The full AP Top 25 preseason poll can be viewed here. The Wildcats were voted No. 4 in the preseason USA Today Coaches Poll two weeks ago.

It’s the ninth consecutive season under Calipari that Kentucky will begin the season ranked among the top 25 teams in the country, as voted on by a national panel of select media members from across the country. The Wildcats have been ranked preseason top five in the AP Top 25 in eight of Calipari’s nine seasons, including seven straight.

Kentucky will start the season among the early title contenders despite losing eight players from last season’s roster, including three first-round draft picks. Calipari, as he does so every season, has reloaded with a talent-rich recruiting class.

The Recruiting Services Consensus Index, which tallies major recruiting rankings and plugs them into a formula to calculate a consensus ranking, measured this group as the best ever. The highly touted signing class joins returners Wenyen Gabriel, Sacha Killeya-Jones and Hamidou Diallo, among others. Diallo was named to the preseason All-Southeastern Conference First Team while freshman forward Kevin Knox was tabbed to the second team.

Kentucky was picked by the media to win its 49th SEC regular-season crown. UK, after victories over Thomas More College and Morehead State, will finish its exhibition schedule Friday vs. Centre College. Kentucky’s regular season opens Nov. 10 with a 7 p.m. tilt against Utah Valley in Rupp Arena.