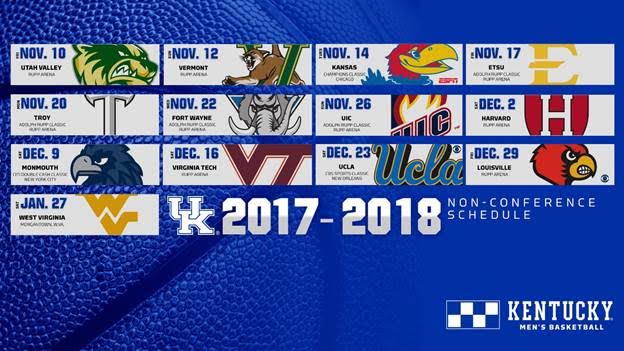 LEXINGTON, Ky. – If one of the goals of a schedule is to prepare a team for postseason play – a high priority on John Calipari’s check list when his staff pieces the slate together each year – the 2017-18 Kentucky men’s basketball schedule, which was unveiled Tuesday, checks off that key box.

Twelve of UK’s 13 nonconference opponents in the upcoming season made a postseason tournament in 2017, including eight of which made the NCAA Tournament. Three of those advanced to the Sweet 16 or better.

As  always, blueblood programs dot the Wildcats’ schedule, but more importantly, teams with a wealth of postseason experience that are expected to be in the mix again in 2017-18 can be found throughout UK’s difficult nonconference slate.

All that lies ahead for arguably Calipari’s most inexperienced team ever. UK will be tasked with replacing 92.6 percent of its scoring and 76.6 percent of its rebounding from last season’s production.

The Wildcats’ complete schedule, fit with exhibition games, times and TV designations, will be announced at a later time, although theSoutheastern Conference announced each team’s league opponents last week. The SEC schedule will feature nine home games and nine away games. Kentucky will play Florida, Tennessee, Vanderbilt, Texas A&M and Missouri twice (home and away). The Wildcats will get Alabama, Georgia, Ole Miss and Mississippi State at home. UK’s additional conference road matchups will be at Arkansas, Auburn, LSU and South Carolina.

“We are going to have what could be the youngest team in the history of college basketball,” Calipari said. “We had to take that into account when building this year’s schedule. How do we prepare our guys to be at our best at the end of the season – which we’ve done nearly every year – while also putting them in a position to grow and succeed? I think we’ve done that with this schedule. When you look at who we will play, you’re talking about experienced teams that were in the postseason a year ago and bring back the core of their teams. This schedule is going to be a challenge for us, but my hope is it sets us up for a run at the end of the season.”
Kentucky’s nonconference schedule will see the Wildcats play in premier venues such as the United Center in Chicago (vs. Kansas) and Madison Square Garden in New York (vs. Monmouth), take them to a Big Blue Nation favorite in New Orleans (vs. UCLA), and feature a difficult trip to Morgantown, West Virginia, to play the West Virginia Mountaineers.

After two exhibition games, which will be announced at a later date, the Wildcats will officially open the regular season vs. Utah Valley on Nov. 10. The Wolverines are coached by 1996 Kentucky men’s basketball national championship player Mark Pope. The matchup is one of seven first-time opponents for UK. Two days later, Kentucky will host another first-time opponent in Vermont, which posted a 29-6 record in 2016-17 in addition to an NCAA Tournament appearance.

Following the date with Kansas – the fourth straight season the Wildcats and the Jayhawks will tangle – Kentucky will return home for five consecutive home games over a two-week period. The first four will be a part of the Adolph Rupp Classic.

First up will be East Tennessee State on Nov. 17, followed by first-time meetings with Troy (Nov. 20), Fort Wayne (Nov. 22) and UIC (Nov. 26). All four of UK’s opponents in the Adolph Rupp Classic made the postseason a year ago, including two (ETSU and Troy) that appeared in the NCAA Tournament.

Although the Adolph Rupp Classic will come to a close at that point, the Wildcats will remain at home to play Harvard, coached by five-time Ivy League Coach of the Year Tommy Amaker, on Dec. 2 for the first time in school history.

Kentucky will play Monmouth on Dec. 9 in Madison Square Garden in New York as a part of the inaugural Citi Double Cash Classic. It marks the second consecutive season the Cats will play in the renowned arena after taking down Michigan State in the Champions Classic a season ago.

The Wildcats will return home Dec. 16 for one of the gems of the 2017-18 nonconference schedule vs. Virginia Tech. Buzz Williams’ squad will return six of its top eight scorers from a team that made the NCAA Tournament a season ago and is expected to be in the upper echelon of the Atlantic Coast Conference in 2017-18.

UK and UCLA will continue what’s been a memorable series of late. The two powerhouses, who lead the NCAA in national championships, will meet Dec. 23 in New Orleans as a part of the CBS Sports Classic. The two schools split their matchup a season ago with UCLA stealing one in Rupp Arena but Kentucky winning the more important game of the two in the Sweet 16.

Of course, the annual rivalry with Louisville remains on the schedule and is always one of the highlights of the year. The Cardinals will make the trip to Rupp Arena on Dec. 29 after defeating the Wildcats for just the second time in their 10 matchups with Calipari at the helm. UK owns the all-time series lead at 34-16.

The nonconference schedule won’t quite be complete when the calendar turns to January, but it will take a break for SEC play. For the third straight season, the Big 12/SEC Challenge will break up conference action. UK’s opponent this year will be West Virginia in Morgantown. It will be the Wildcats’ first game at West Virginia since 1970.