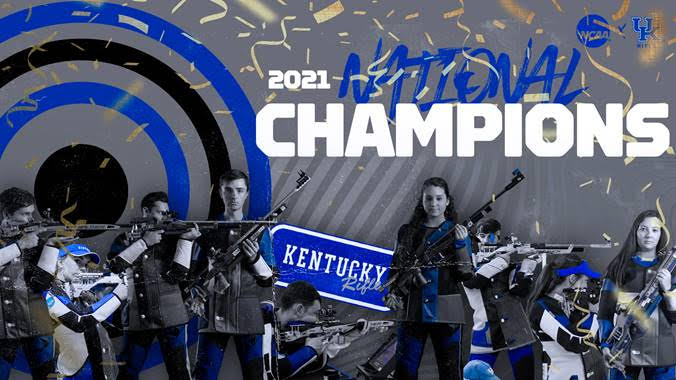 After not getting a chance to put the finishing touches on its impressive 2020 season, the University of Kentucky rifle team claimed its unfinished business Saturday as it won the 2021 NCAA Rifle National Championship as Wildcats finished gold and silver in air rifle inside Converse Hall in Columbus, Ohio.

This is the third national title for head coach Harry Mullins and the Kentucky program. The Wildcats also claimed the team championship in 2011 and 2018. UK’s three titles are tied for third most among all Division I programs with Tennessee Tech and TCU. Mullins is second in Kentucky Athletics history in national championships – one behind Adolph Rupp, who has four. Mullins and Rupp are now the only coaches in the state of Kentucky’s history to win three or more Division I national titles.

Kentucky earned the team championship after posting a 4731 overall team score with a 2352 in smallbore Friday and 2379 in air rifle Saturday. Kentucky’s team score is the highest in championship history since the event went to 120 shots per competitor from 160 shots in 2005. TCU posted a 2380 in air rifle Saturday to finish in second at 4722, while Ole Miss finished third at 4710. West Virginia, Alaska Fairbanks, Nebraska, Memphis and Air Force rounded out the team competition.

“That was huge for our team to be able to come in and close this out. We talked all year that this was going to be a close match and come down to a shot or two,” UK head coach Harry Mullins said. “We even talked about it last week and asked the team, ‘Who wants to be the one to take the last shot?’ To finish that strong at the end as the gap started to close a little in smallbore and in air rifle was huge. They were phenomenal. If you go into our range, there are two signs – one on the right column and one on the left column – and they say finish. That kind of came with us talking to Mr. Barnhart years ago and us to finish what we had started. For them to be able to hold up under the pressure of knowing that every shot was going to count as other teams were finishing and we were still competing. I cannot say enough about what the team did.”

The medals didn’t stop after Kentucky earned the team crown as sophomore Mary Tucker and junior Will Shaner finished first and second, respectively, in the NCAA air rifle individual championship. Tucker claimed gold, hitting a perfect 10.9x on her final shot to become the sixth shooter in history to earn both the air rifle and smallbore gold at the NCAA Championships. Tucker is the first Wildcat to sweep gold at the event after becoming the second Wildcat to earn gold in smallbore and fourth to claim the medal in air rifle. Tucker was named the Most Outstanding Performer at the event. Shaner’s silver medal is his first at the NCAA Championships.

“This is a really big deal for this team. We have been going at it for two years now and this was long overdue for us,” Tucker said. “We all kind of knew that we were going to do good. We went into the match confident and came out on top … I was really proud of my team and like you said, I normally do finish early, so I get to watch them finish up. Normally with out four shots left, the rest of the team does stand back up on the line because we are a team and we finish together. The last couple of shots I do not get to watch, but I was proud of the team. They all did really, really well. There were a couple of things that could have stopped them but they didn’t let it.”

The Wildcats’ 2379 in air rifle was second at the event, finishing one off TCU’s 2380. Down the stretch, Kentucky’s shooters were clutch with three scoring perfect 100s in the final 10 shots. Shaner paced UK with a 597, while Tucker earned a 596. Junior Richard Clark posted an impressive 594, while sophomore Jaden Thompson earned a 592. Senior Hailee Sigmon posted a 587.

Kentucky entered Saturday with a 10-point lead scoring a team smallbore score of 2352. UK’s high overall aggregate gives the Wildcats four aggregates of 4730 or better this season, which is more than any other team in the nation.

This was the 27th appearance all-time for Kentucky in the NCAA Championships. The Wildcats were regular-season Great America Rifle Conference Co-Champions earlier this season.