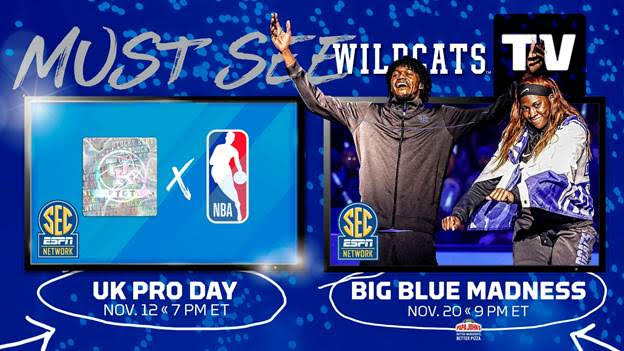 To prepare the Big Blue Nation for the start of the 2020-21 Kentucky basketball seasons in a safe and healthy environment during the COVID-19 pandemic, UK and SEC Network will partner to provide fans with a virtual Big Blue Madness and Pro Day in the upcoming weeks.

Pro Day, a Kentucky men’s basketball event, will be televised Nov. 12 at 7 p.m. on SEC Network. The following week, on Nov. 20, SEC Network will televise Big Blue Madness, presented by Papa John’s, at 9 p.m., officially tipping off the 2020-21 seasons for the UK men’s and women’s basketball teams.

Big Blue Madness and Pro Day will be television-only events. Fans will be not be permitted into either event due to safety concerns during the COVID-19 pandemic.

Madness will be a 90-minute telecast with Tom Hart, Jimmy Dykes and Carolyn Peck on the call for SEC Network.

The Kentucky men’s basketball team’s annual Pro Day, which provides NBA organizations with a look at the current Wildcats’ roster, will move forward despite safety protocols that will restrict professional scouts and general managers from attending in person.

SEC Network will televise the 90-minute Pro Day and all 30 NBA teams will be provided an exclusive feed of the combine-like practice conducted by Kentucky coaches and staff. Coaches and staff will direct players through various agility and shooting drills in addition to 3-on-3 and 5-on-5 scrimmaging. All 30 NBA teams were represented in-person in the previous six seasons.  Hart and Dykes will call the action for SEC Network.

The men’s team will enter season No. 12 of the John Calipari era with one of the most inexperienced rosters in school history. UK will be tasked with replacing 94% of its scoring from last season – most under Calipari – 92.4% of its minutes, 84.4% of its rebounds, 98.6% of its assists and 91.5% of its blocks.

The Wildcats said farewell to eight of their top nine scorers from a season ago, including all five starters. The lone major returning contributor from last season will be sophomore forward Keion Brooks Jr., who averaged 4.5 points and 3.2 rebounds per game in 31 appearances, including six starts.

The men’s team has not released its new 2020-21 slate after the NCAA Division I Council approved moving the first contest date to Nov. 25. It has been confirmed that UK will play UCLA on Dec. 19 in the CBS Sports Classic in Cleveland and Texas in Rupp Arena on Jan. 30 in the annual SEC/Big 12 Challenge.

In early preseason polls, the Wildcats have been ranked in the top five by several major outlets.

Entering its 14th season under Matthew Mitchell, Kentucky returns a large portion of its production for 2020-21 even with the departure of five 2020 seniors due to graduation. UK will bring back its top two scorers while also returning its top two rebounders. Kentucky will also add Maryland transfer Olivia Owens, 2019 Pac-12 Freshman of the Year Dre’una Edwards and a top-15 recruiting class in true freshmen Treasure Hunt, Nyah Leveretter and Erin Toller.

Rhyne Howard is the leading returner for the Wildcats after a long list of accomplishments and honors last season. The guard was one of five finalists for the John R. Wooden Award and Ann Meyers Drysdale National Player of the Year Award while also being named a first-team All-America honoree by the Associated Press and United States Basketball Writers Association. The 2020 SEC Player of the Year finished second nationally in scoring last season with 23.4 points per game while she hit a school-record 84 3-pointers during the year.

Also returning will be the 2020 SEC 6th Woman of the Year in Chasity Patterson, who averaged 11.5 points in 19 games last season. In the post, UK returns KeKe McKinney, who averaged 6.5 points and 4.7 rebounds, and Tatyana Wyatt, who averaged 5.5 points and 3.7 rebounds. Kentucky natives Blair Green and Emma King will also be back for the Wildcats and hope to build on promising 2019-20 seasons.

Several players will return to the team but did not see time last year due to injury or NCAA transfer rules. Edwards headlines that list after impressing during her freshman year at Utah along with guard Kameron Roach, who is healthy after she tore her Achilles at the end of her sophomore season and used last year to rehab and regain strength.

UK finished the 2019-20 shortened campaign with a 22-8 record, securing its 20th 20-win season in program history and its 10th Mitchell. The Wildcats were ranked in the top 20 of both listings all season long, finishing No. 16 in the Associated Press Top 25 and No. 18 in the USA Today/Coaches Top 25.