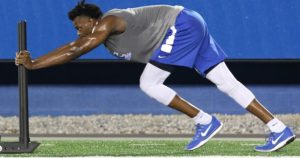 “I just want to let the Big Blue Nation know I’m going to be fine and looking forward to coming back better than ever,” Vanderbilt said. “I’ve had some setbacks before and I’ve come back from all of them. After talking with my doctor and my family, I feel good about the plan they have in place for me. I’m anxious to get this right and return to my team so I can put this behind me for good. I can’t wait to get back to my brothers and help us compete for a national championship this season.”

“Jarred has been unbelievable since he stepped on campus,” UK head coach John Calipari said. “He’s improved tremendously the last four months. Unfortunately, we learned late last night that he’s going to miss some time to get his foot healthy. I’m disappointed for Jarred, but only because I know how badly he wanted to get this season started. I’m OK because I know this is what’s best for him.

“As I told Jarred, my concern for him is getting this thing right and getting him healthy for the rest of his career. We’ll miss him on the court, but I want what’s best for him and his family, and right now that’s taking care of this injury and making sure he doesn’t have to worry about it again. With the motor and worth ethic I’ve seen from him, I have no doubt he’s going to be better than ever when he returns and will provide us with a huge lift in conference play. Now it’s up to his teammates to hold the fort down until he gets back.”

Vanderbilt, a 6-foot-9 forward from Houston, was one of the top signees out of the 2017 class. A consensus top-20 prospect, Vanderbilt was ranked as high as the No. 9 overall prospect by 247Sports and the No. 12 overall player by Scout.

As a senior last season at Victory Prep Academy, Vanderbilt averaged 28.5 points, 13.4 rebounds and 8.8 assists. The lefty appeared in the McDonald’s All American Game, the Jordan Brand Classic and the Nike Hoop Summit alongside the nation’s top talent. He shined in the Nike Hoop Summit, posting 19 points and 10 rebounds while shooting 8 of 12 from the field.

Vanderbilt was also a member of the USA U16 National Team that captured the gold medal at the 2015 FIBA Americans U16 Championship.