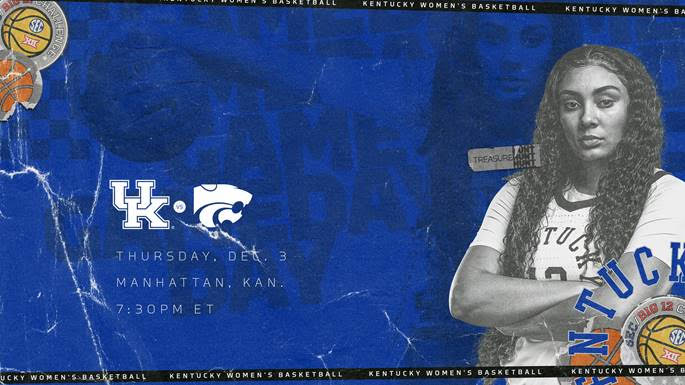 Wildcats vs. Wildcats in the SEC/Big 12 Challenge Thursday at 7:30 p.m. ET

The No. 11 University of Kentucky women’s basketball team will hit the road for the first time this season as it travels to Manhattan, Kansas on Thursday to square off against Kansas State inside Bramlage Coliseum at 7:30 p.m. ET.

The game vs. Kansas State will be streamed on ESPN+ with Brian Smoller and Missy Heidrick on the call. The action can also be seen through WatchESPN on computers, smartphones or tablets. Darren Headrick will have the call on the UK Sports Network on 630AM WLAP in Lexington. Live stats and free live audio will be available online at UKathletics.com.

Thursday’s game is part of the SEC/Big 12 Challenge, which features every team from the Big 12 against 10 squads from the Southeastern Conference. This is the fifth season in which 10 games will be played. The format consists of five home games on campus sites for each conference. Four of the 10 games feature at least one team ranked in the AP Top 25. This will be Kentucky’s third time to play in the challenge. UK’s first showing was in 2016 when it defeated No. 12 Oklahoma 82-68 inside Memorial Coliseum. UK’s last showing was in 2017 when Baylor won 90-63 inside the Ferrell Center in Waco.

Kentucky (2-0) is coming off two home wins to start the season last week, defeating Murray State 86-60 and four-time defending OVC Champion Belmont 70-50. It was a different UK player in each game stepping up with senior guard Chasity Patterson scoring 30 points with eight steals against the Racers while sophomore forward Dre’una Edwards posted 27 points and 15 rebounds against the Bruins. Patterson became the first UK player to record eight or more steals in a game since A’dia Mathies in 2011, while Edwards was the first UK player since Evelyn Akhator in 2017 with 25+ points and 15+ rebounds in a game. Junior guard Blair Green has also started the season strong with 13 points against Murray State and nine against Belmont, adding four rebounds per game. Senior forward KeKe McKinney recorded her second career double-double against Belmont with 10 points and 10 rebounds and is averaging a team-best 31 minutes per game so far this season.

As a team, the Wildcats are averaging 78.0 points per game with a +10.5 turnover margin and +4.0 rebounding margin. UK is hitting 42 percent from the field and has 28 assists with 27 steals. Kentucky will welcome back to the lineup Thursday one of the best players in college basketball as Associated Press Preseason All-America honoree Rhyne Howard will play in her first action of the year after a two-game suspension to start the season for not upholding the standards of the program. Howard finished second nationally last season with 23.4 points per game while she set a school-record with 84 3s made.

Kansas State (1-0) opened the 2020-21 season with a 66-51 win over Southern University on Sunday. The win was the Wildcats’ 11th straight in a season opener. The game was tighter through three quarters before K-State outscored the Jaguars 21-10 in the fourth quarter to clinch the win. Sophomore center Ayoka Lee was the leader for Kansas State, scoring 17 points with nine rebounds while junior guard Christianna Carr scored 15 points with four rebounds.

Lee is the leading returner for the Wildcats as she is on the 2021 Jersey Mike’s Naismith Trophy Watch List, 2021 Wooden Award Top 30 Watch List and 2021 Lisa Leslie Award Watch List. Last season, Lee averaged 17 points per game adding 9.0 rebounds per game, 4.0 blocks per game and a 53.3 field-goal percentage. Carr was named to the 2019 Big 12 All-Freshman Team two years ago and has averaged 9.8 points per game each of the last two seasons. The junior has hit 114 career 3s with 76 assists, 24 blocks and 47 steals.

Jeff Mittie, one of the winningest active coaches in NCAA Division I with over 500 career wins, is in his seventh season at the helm of the K-State program. Kansas State has been to postseason play each season under Mittie – 2019-20 canceled postseason not included – including three NCAA Tournaments. Last season, the Wildcats were 16-13 overall and 10-8 in Big 12 play setting a school record for rebounds per game and blocks average for a season.

This is the first ever meeting between Kentucky and Kansas State in women’s basketball, while Kentucky is 9-9 all-time against teams that make up the current alignment of the Big 12.