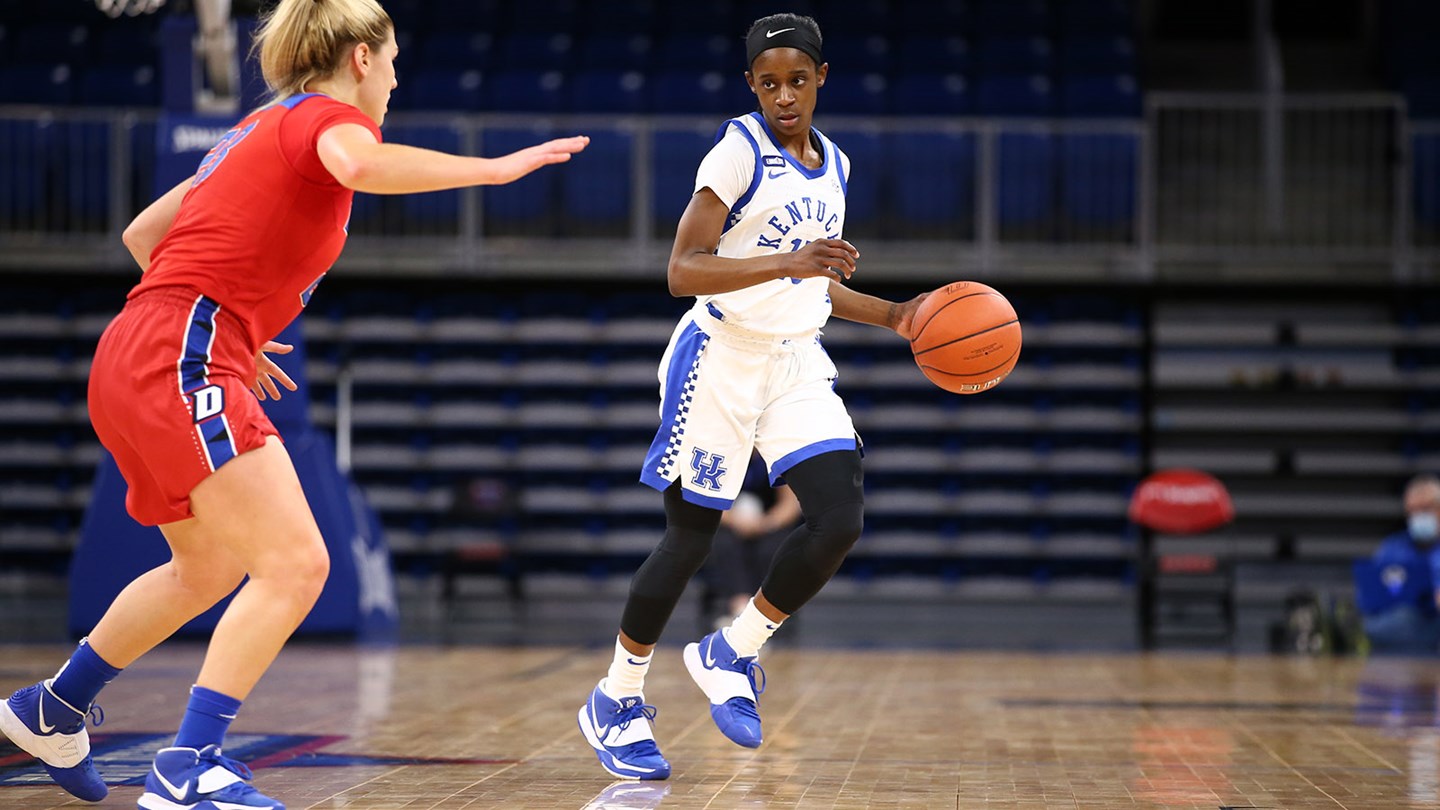 Chasity Patterson scored 22 points and Dre’una Edwards had 18 points and grabbed 12 rebounds, but the ninth-ranked Kentucky women’s basketball team lost for the first time this season, falling to No. 24 DePaul 86-82 on Wednesday at Wintrust Arena.

DePaul (3-2) used its fast-paced offense to score 38 fast break points in the game compared to just 17 for Kentucky. The Cats won the rebounding battle 46-31 and had 21 second-chance points compared to just eight for the Demons. Kentucky also had 23 turnovers, leading to 19 DePaul points, while the Demons had 18 turnovers, leading to 14 UK points.

Kentucky (6-1) scored the first four points of the game on baskets by Edwards and Howard. DePaul would cut the lead to 6-4 before Kentucky scored five in a row, all by Patterson, to grab an 11-4 advantage.

The Cats would lead 14-6 before the Demons scored seven straight to cut the lead to 14-13 with 4:15 to play in the first. Patterson stopped the run with a three, but DePaul would tie the game at 17-17. After Kentucky scored four straight, on layups from Olivia Owens and Edwards, DePaul scored the last five points of the period to lead 22-21 after one quarter.

Early in the second period, the lead changed hands six times before DePaul grabbed a 31-27 lead. Kentucky got a free throw from Tatyana Wyatt and a layup from Edwards to cut the deficit to 31-30 with 2:52 left in the half. After a DePaul basket, Kentucky got a three and a layup from Robyn Benton to lead 35-33. DePaul would tie the game but Howard scored on a layup with seven seconds left to give UK a 37-35 lead at the half.

Early in the third period, DePaul took the lead back with five straight points, but Kentucky answered with an Edwards layup and a Blair Green jumper, taking a 41-40 advantage. But DePaul came back with eight points in a row to lead 48-41 with 6:08 to play in the third.

The Cats fought back with a Howard jumper, a KeKe McKinney layup and a Patterson free throw to cut the deficit to 48-46 with 4:43 left in the period. After four straight DePaul points, Kentucky outscored DePaul 7-5 down the stretch, but the Cats trailed 57-53 after three quarters.

Kentucky kept chipping away, getting within three on an Edwards put back with 54 seconds to play. After a pair of DePaul free throws, Kentucky scored on a Patterson layup to make it 82-79 with 16 seconds left. The Cats would get no closer.

Kentucky returns to action on Saturday, hosting Wofford at Memorial Coliseum. Tipoff is set for 1 p.m. ET and the game can be seen on SEC Network Plus.